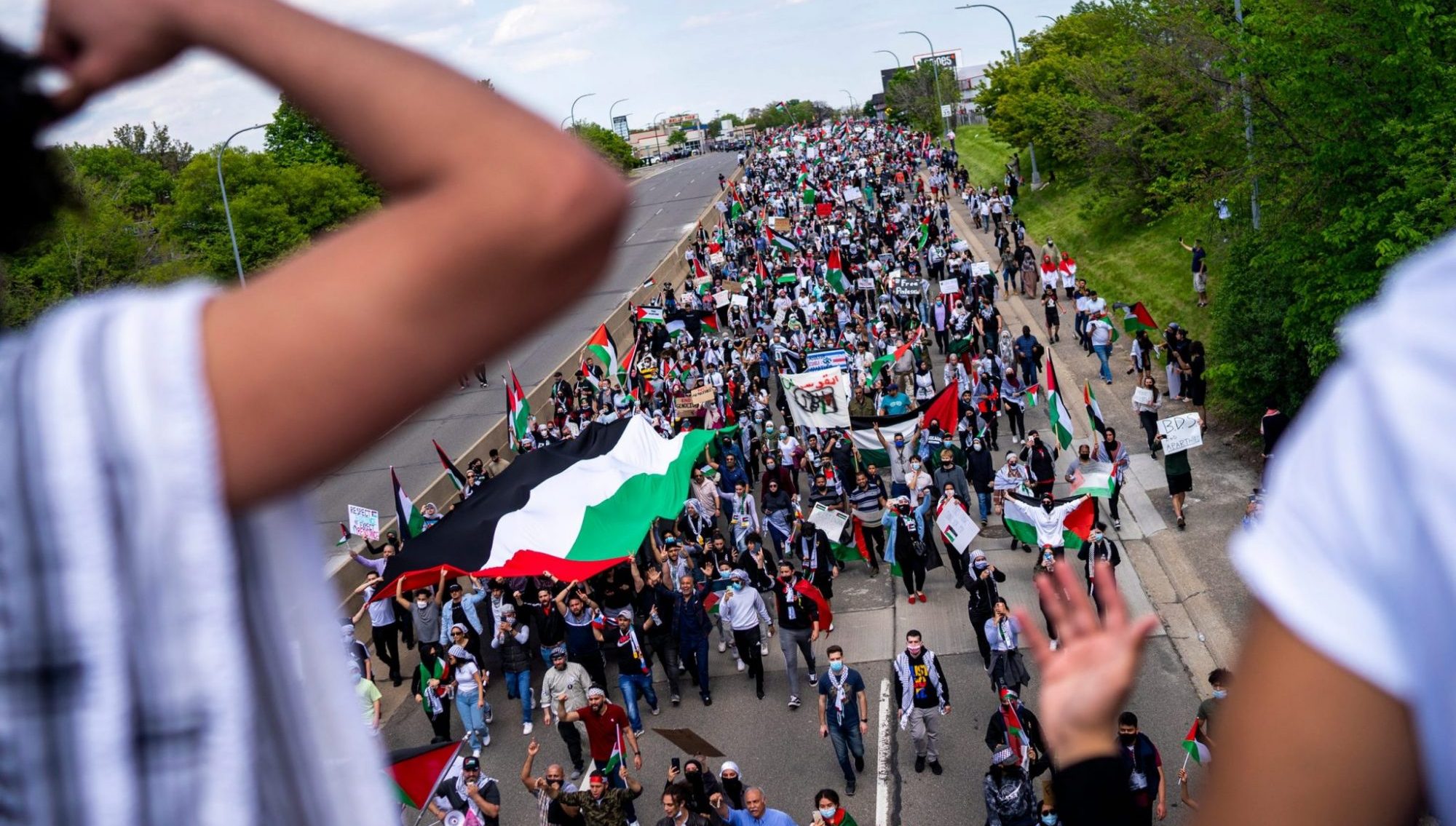 The mass mobilizations across the globe for Palestine and against the racist violence of the Israeli state show the depth of this important struggle for self-determination. They also shown the growing political maturity of protesters, expressing solidarity between the BLM movement and the fight for Palestinian liberation against U.S. imperialism.

Widespread demonstrations have taken place this week in Los Angeles, New York City, and many other U.S. and global cities, suburbs, and even small towns, including massive rallies across the Middle East. The most significant actions were in Palestine itself, where a general strike called by independent activists culminated in massive rallies. These actions have deepened attention on the role of U.S. imperialism — which relies on anti-Black racism at home and Israeli oppression of the Palestinian people abroad to wield its power.

On Tuesday, May 18, roughly 200 people gathered to march in front of the Ford Motor Company plant in Dearborn, Michigan where Joe Biden was speaking. Dearborn is home to the largest Arab American and Palestinian populations in the United States. Speaker Jae Bass, a Black Detroiter and a leader of Detroit Will Breathe (DWB) — a militant, politically independent organization created last year in the midst of the uprising against police brutality — connected the experiences of the daily fight against police brutality here with the brutality of the Israeli military in Palestine. Noting that both struggles are linked, he asked those present to continue fighting to free Palestine and make sure Black and Brown lives matter in Detroit. Bass called for an end to all spending on institutions of repression such as the police and the military, both here and abroad,

We see that it’s all the same fight. We are fighting the same systems of oppression. Zionism is racism. Racism is Zionism. Black Americans are being displaced and oppressed by white supremacy, and the people of Palestine are being displaced and oppressed by the Zionist entity of Israel, which is also being aided by white supremacy. It’s all the same fight. So that’s why when we say Black Lives Matter, that’s to say free Palestine. When we say Free Palestine, that’s to say that Black Lives Matter. It’s the same. For liberation of oppressed people everywhere, that’s this fight right here.

His speech was received enthusiastically by the crowd.

As Reuben Telushkin, a Black Jewish national organizer for Jewish Voice for Peace (JVP), told the Guardian, “People were connecting in the streets, connecting online and so pre-existing solidarities were deepening, but also average, maybe more apathetic folks, were being politicized.”

The Guardian article noted the significant increase in solidarity and people speaking out against Israel — noteworthy because of the decades of hard backlash against anyone who dared to speak out against the atrocities the Israeli government routinely commits against Palestianians.

The same day, another rally took place at the Dearborn Police Department and Courthouse, drawing more than 3,000 protestors — the overwhelming majority from the Arab and Muslim community in Metro Detroit. They gathered to denounce Biden’s continual support and funding for Israel. Among the many chants, two were most frequent: “Free, Free Palestine!” and “Black Lives Matter!”

Rally speakers illustrated the growing militancy of the movement. One older member of the Arab American community made it clear that he refused to apologize for the rockets fired into Israel, or to call Hamas a terrorist organization. He was met with an eruption of applause and cheers.

These mobilizations had a spirited air of defiance. The Tuesday rallies and marches built on massive demonstrations held the previous weekend. On Saturday, May 15, 3,000 people rallied and marched in Detroit as part of a national day of action called by the Palestianan Youth Movement (PYM), leaders of which spoke of the need for revolution — joining Jewish speakers who denounced Zionism and U.S. aid to Israel. One of the chants that day was “Justice is Our Demand! No Peace on Stolen Land! Get Up And Take A Stand! We Are Taking Back Our Land!” The chant was led by a contingent from the U.S. Palestianian Community Network.

On Sunday, May 16, 10,000 people showed up in Dearborn for one of the largest demonstrations in that city in recent memory. The chants reflected a fighting spirit and growing optimism within Michigan’s Arab community in Michigan and across the globe. One reason is the outpouring of support for the cause of Palestianian liberation. After decades of marginalized struggle, solidarity actions around the world are demonstrating to the Arab community that it is no longer on its own.

Several other objective factors feed this growing optimism. The failure of “Operation Protective Edge,” the 2014 Israeli military offensive against Hamas, opened up internal schisms within the Zionist government, leaving more moderate forces reeling from the international backlash against Israel for the brutality and bloodiness of the operation. This opened the floodgates for greater criticism of Israel’s violently racist, inhumane tactics at military checkpoints, and its racist, violent policy of settlement expansion, combined with greater criticism of the U.S. imperialism’s massive funding of Israel and the cross-training of IDF forces and U.S. police. Less attention is paid to the high levels of U.S. funding to Egypt and Jordan, which promotes U.S. interests by silencing the strongest regional opposition to Israel’s founding. Another objective factor is the overall decline of U.S. hegemony within the region as a result of the quagmire of the Iraq and Afghanistan wars, which have left U.S. Imperialism weaker and regional forces such as Iran stronger. The weakening of U.S. hegemony has begun to expose the critical role the United States plays in the oppression of the Palestinian people.

Past Palestinian solidarity rallies in Dearborn would occasionally have U.S. flags being waved around, but not a single U.S. flag could be seen at these recent demonstrations.

The Zionist State of Israel Exists at the Behest of U.S. Imperialism

Why is Israel able to take actions that go against the wishes of U.S. imperialism, which include demands that Israel put a halt to new settlements in the so-called “Occupied Territories”? It isn’t because Israel or the Zionists dominate the U.S. government, or that they have a strong U.S. lobby. It’s because Israel is such a valuable part of U.S. imperialism’s ability to maintain hegemony in the region, and so the United States allows the Zionists to get away with bucking it’s wishes — but only to a certain point. In truth, if U.S. imperialism so chooses, it can bring the hammer down on Israel the same way it has done with other allies it once tolerated but eventually found too problematic when they exercised more independence than permitted (Saddam Hussein’s government is one example). U.S. leniency with Israel speaks to the fact that the U.S. government is not fundamentally opposed to the Israeli government committing its atrocities, or to the overall objectives of the Zionists. The defining structural role for the Israeli state — the reason it exists and continues to exist as such — is to promote and give cover to U.S. hegemony in the region.

In the post-World War II arrangement of the Middle East, dictators friendly to the United States were installed at the heads of oil-rich countries. Israel’s oppression of the Palestinians, which was an inevitable outcome of the UN partition (aka “Israeli independence,” which produced the Nakba catastrophe), has provided a focus for the Arab masses ever since, deflecting their attention away from denouncing the misleaders running their own individual countries or challenging U.S. imperialism directly. The Left has often been hoodwinked by this deflection as well. U.S. imperialism grew hegemonic in the region as it neutralized opposition, particularly in Egypt and Jordan by the 1980s.

Through all this time, Zionism has stood as the heavily armed face of evil, and Israeli state compels its people to commit acts of racist violence to enforce imperialist oppression. The pivotal fact that the State of Israel would not exist for Zionism to implement its racist ideology without continual, substantial U.S. backing has often been relegated to an afterthought, or forgotten altogether.

The recent mobilizations across the world have shown that people are seeing things more clearly, with a better understanding of the major role U.S. imperialism plays in Israeli government policies. People have seen U.S. imperialism topple governments it deemed “dangerous” and “unfit.” People know that if the U.S. imperialism really considered Israel to be a threat to humanity, it could employ a host of measures, including withdrawal of aid and sanctions, to temper Zionist aggression and force the Israeli state to rein in its genocidal policies of displacement and murder.

This growing understanding has been the catalyst for new solidarity not only between the BLM movement and Palestinian activists, but also between young Jewish activists and Arab youth, who are both coming to a deeper realization that Zionism is not Judaism, and in fact that it is antithetical to Judaism. The Zionists wrap their ideology in Judaism for the cynical purpose of accusing their opponents of antisemitism — while signing onto the white supremacy of the ruling classes.

This is progress that the movement must continue to grow and deepen.

It must be understood that any real chance of reducing U.S. aid to Israel requires a clean break with the Democratic Party. Rep. Rashida Talib (Dem.-MI), the first Palestinian American ever elected to Congress, has spoken passionately about Palestinian liberation, and personally confronted President Biden when he was in Dearborn earier this week. It is clear that she has love for her people, and is prepared to be confrontational in a way mainstream Democrats are not. Still, her membership in the Democratic Party restricts how much she can fight and how far she can really go. Rep. Debbie Dingel (Dem.-MI), a longtime staple of the Michigan Democratic Party machine, was seen touching Rashida on the arm, signaling for her to step back. Rashida could not, or would not, call for a complete halt to U.S. aid to Israel, limiting her call to one for a “critical review” of that aid.

The truth of the genocidal policies being implemented against Palestinians by the Israeli government — with the U.S. military and financial backing — will never be fully told, and cannot be militantly opposed, without rejecting any notion that our only hope is jockeying between the Democrats and Republicans who back Israel and all that aid. Both parties take their “voters” for granted and almost never offer them anything substantial in return for their support.

What has exposed the moral bankruptcy of the Israeli government and the full complicity of U.S. imperialism has been the independent mobilization of the movement for Palestinian liberation, including the longstanding and growing BDS (Boycott, Divestment, Sanctions) campaign and the ongoing resistance against Israel by Palestinians and the Arab masses in the Middle East. It is the massive mobilizations across the globe that made it necessary for Israel to agree to a ceasefire it does not want, not the good graces of the Democrats or the U.S. government. These mobilizations must continue and deepen. The time has come even for political strike actions in solidarity with Palestine and against the racist, violent genocidal policies of the Israeli government and its U.S. imperialist sponsor.