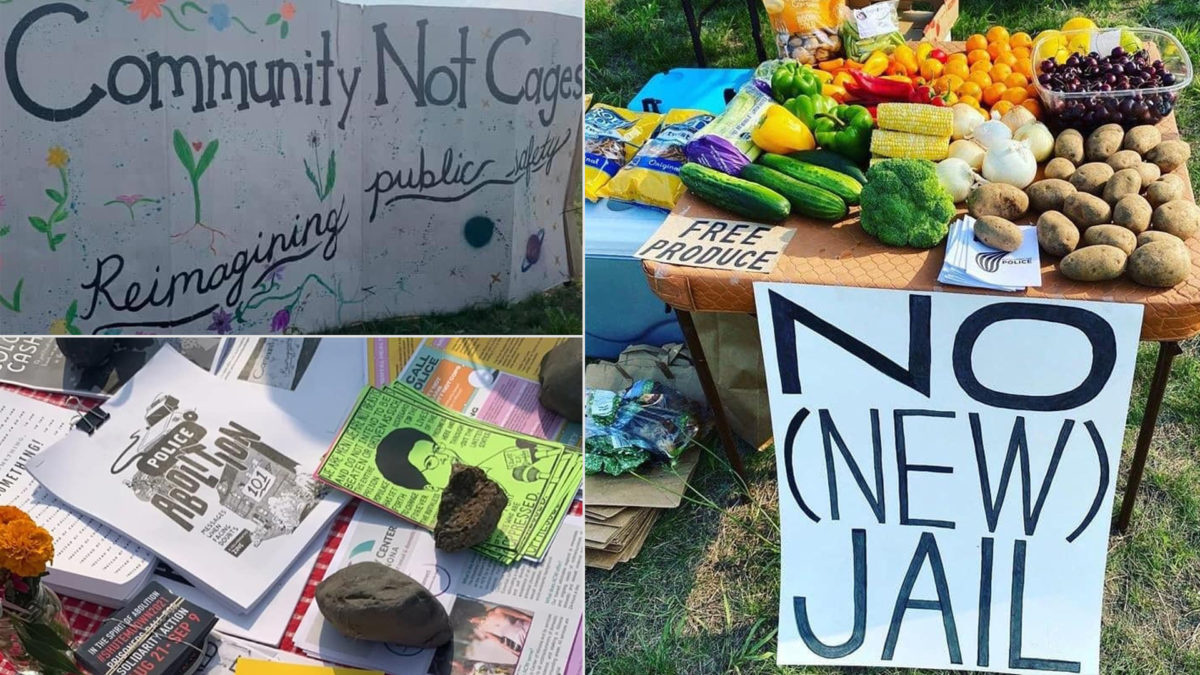 Above Photo: Community Not Cages.

A wave of prison abolition actions and demands have swept the United States every August since 1979 from inside the walls to outside. New groups in the Midwest such as Abolition Is a Practice and Community Not Cages (CNC) are carrying on the Black August traditions. With a proposed new county jail in Winona, Minnesota, slated to cost taxpayers at least $28 million, we heard from abolitionists opposed to the project about their efforts.

With a population of ~27,000 in southeastern Minnesota, Winona is the seat of Winona County and a town that sits on the western edge of the Mississippi River across from Wisconsin. The Minnesota Department of Corrections (DOC) inspected the Winona County Jail in 2018 and after finding the building wasn’t up to standards, the DOC gave the jail a closing date of September 30, 2021, unless a plan is in place for a new facility.

The county has since created the Jail Construction Planning Committee and has made plans for a new facility and to remodel other government buildings and offices in the area. Winona County has tapped the jail-construction extraordinaire firm of Klein McCarthy to draft the plans and Market & Johnson to manage the construction. The bid is due on August 19 and the county is holding a special meeting of the Winona County Board on Tuesday, August 31, 2021 at 9:00 a.m., to review and approve the Guaranteed Maximum Price proposal from Market and Johnson for the Jail Project.

Opposition to the new jail and millions in expenditures has been growing. Community Not Cages, a community network committed to abolition and the liberation of Indigenous people based in Winona, held a ‘People’s Public Hearing’ on July 23 in the space in which construction on the new jail is set to break ground this fall.

“We are a community network that is committed to public research and narrative building to see local investment in our community and divestment from the prison industrial complex. Through the organizing efforts of this coalition and the community at large, Winona area public schools removed the police in schools, we stopped the building of a juvenile detention center, and folks are rethinking what public safety really means for this community. We believe that strong communities make police and jails obsolete… One of our visions for public safety looks like mutual aid..!”    Community Not Cages

UR: What prompted you all to go from Minneapolis to Winona for the People’s Public Hearing?

Abolition Is a Practice: They’re building a $28-million jail in so-called Winona. In Itasca. In Carlton County. They are trying to re-open a jail in Appleton. And that’s just in the settler-colonial entity known as Minnesota alone. All around us, billion-dollar facilities with “innovative” and “more humane” designs are proposed. Across Turtle Island [the U.S.] judges declare they have “no choice but to build a new jail.”

In the so-called Midwest, the prison-slavery complex hides in plain sight. Jails and prisons stand out in any area. But throughout occupied Dakota territory – the southern portion of Minnesota – such concentration camps barely attract attention. Centuries of white-supremacist control and conditioning have normalized captivity. No need to conceal the sites of torture and bondage when most folks don’t even notice the ‘correctional’ facilities along their drive. No need to conceal the fact that they’re attempting to build more of them as we speak. This is everyday fascism, both cruel and supremely confident. The increase of jails and prisons is both a warning and a challenge. Their presence hints at the true extent of our enemy. Fighting a carceral regime that has scarred landscapes far and wide will take coordination.

In order for the revolutionary abolitionist movement to grow, we must connect struggles across regions; going beyond our specific city-based experience is necessary. So we ventured to occupied Winona to meet the group CNC in hopes of forging bonds of mutual solidarity, to aid each other in this war on prisons, pigs, profit, and property. Also, Winona City Council recently denied CNC the opportunity to speak against the jail at a city council meeting, citing their illegitimate rules for public comment. So the group found their own way to be heard.

UR: What organizing steps did you take?

Abolition Is a Practice: Pulling inspiration from Black Ink’s Building a Midwest Revolutionary Abolitionist Movement, we looked at ways we could understand the political landscape of an area outside of the so-called Twin Cities, using this information to better connect the one struggle between the two areas. But how does a group of abolitionists support the disorganization of a jail from afar? Observation, research, and networking. Meaning we read about the jail, called Winona County representatives, and made connections with CNC organizers. For every proposed jail, there are groups of disorganizers ready to fight them.

We arrived with zines and posters in hand, adding to the existing literature table that had been set up and getting hugs from a CNC organizer we had been communicating with from afar. Importantly, a mutual aid table had been set up with food and clothes to take as needed. Then we settled in on the grass and listened to the stories of those intimately familiar with the Prison-Industrial Complex tell their stories.

UR: Were there stories that should be shared?

Abolition Is a Practice: A young person told her story of six years in the juvenile system between heaving and light sobs. The unforgiving cruelty of the prison industrial complex had touched her very early through the criminalization of substance usage, and instead of care and support she received condemnation, isolation, and trauma. The bravery of those kidnapped and/or surveilled by the State never ceases to stun us. And the immense cruelty that the state throws at problems instead of love, tenderness, and humanity is baffling and rage-inducing.

We heard from a CNC organizer, who spoke with fire and conviction on behalf of someone who chose to remain anonymous (Winona is a small town and the concern of pig retribution is on the collective mind). The organizer recounted the story of a teenager who was unhoused and in poverty for years. A drug charge led to a bail that was insurmountable. Beyond this, their attorney did not even appear for sentencing, instead sending his wife in his place. In the story he noted how familiar she was in the courtroom, and how incredibly uneasy that made him. This almost certainly guaranteed the maximum sentencing guidelines were followed. That stand-in attorney would go on to become the Winona County Attorney.

Finally, a mother spoke of truancy laws being used to criminalize youth. During the Zoom relayed school year it was revealed that students were accumulating tardies despite performing well. This tardiness was being referred to the Department of Corrections, and people would receive a mailer from the police calling them into court or asking them to essentially plead out and admit their child into the system of corrections. We cannot imagine how many kids were caught up in this web. We cannot imagine how many folks who did not speak English as a first language had cops knocking on their door with no clue. We cannot imagine how many folks did not have the time or resources or energy to fight these egregious attempts at criminalization like this woman did, whose son’s charges were eventually and arbitrarily dropped.

UR: What happened after the speakers?

Abolition Is a Practice: After speakers had finished and attendees were offered to take the mic we intentionally traveled through the crowd, passing out zines directly rather than relying on folks to come grab them. We believe conversation in itself is an act of political education and part of what forges our relationships with others. We met several people all active in the Winona community and we were all thrilled to meet each other. We had long discussions about women and gender studies, Palestine, and of course, abolition (all intersect with each other). We invited them to Abolition Is a Practice and they invited us to return to Winona for disorganizing.

It is a powerful reminder of what simple acts of solidarity can do. And in that same spirit, Jailhouse Lawyers Speak has put out the call for Shut ‘Em Down 2021 actions (pdf), to take place at ICE, jails, prisons, and higher-learning institutions that support prison labor and policing. Bringing outside to the inside, it’s a chance to bend the bars through solidarity on the two days that have defined the Black Liberation Movement and revolutionary abolition—August 21 and September 9. The pigs assassinated imprisoned militant George Jackson on the west coast, and then the Attica prisoners on the east coast rose up against the pigs. 50 years ago, all in less than three weeks. As we near those days, it’s time for us to solidify existing cross-regional connections and seed new ones. Revolution is a global process, so we can at least do our part in the urban and rural areas of the Midwest.

Power to those who are agitating for open space of community care and survival, against life-destroying structures of incarceration. We were told that the land proposed for the jail is sacred to the Indigenous peoples who still inhabit it in spite of genocidal colonization. Power to Community Not Cages to our south, power to those resisting Enbridge’s Line 3 invasion of Anishinaabe lands to our north, for we must connect with all areas of struggle in this region. We are everywhere and we are with you in this fight.

UR: What exactly is Abolition Is a Practice?

Abolition Is a Practice: Abolition Is a Practice is an abolitionist working group that meets twice a month, every second and last Friday at The Landing Strip (2614 30th Ave S. Minneapolis, MN), where we read and discuss zines, build community, and collective power to undo the carceral systems of oppression and reimagine relations. The group ranges in size and each meetup is unique. Our next event is a screening of “Attica” on Friday, August 13, 8 p.m., to commemorate Black August and educate ourselves to action—as accomplices of the imprisoned millions—in this all-out war for total liberation.