Above Photo: From Globalvoices.org

Off the shores of Thailand, a seafood industry flourishes and feeds the multi-billion-dollar global appetite for tuna, prawns, and squid. But in the ground zero of the global supply chain for seafood, exploitation and debt-bondage are standard workplace practices.

The men who work the boats are in the main Burmese and Cambodian nationals driven from their homelands by poverty and attracted by the promise of a salary and remittances. To get to Thailand and to find an employer, most of these workers use the services of migration brokers and employment agencies, who can charge exorbitant prices for the papers and passes they provide.

These fees, ranging from 15,000 to 30,000 THB ($500 to $1,000 USD), are far beyond the means of most of the workers. Their new employers in the fishing industry usually pay the fees, and thus workers begin their jobs heavily indebted to the boat owners. Once they start their jobs, many foreign workers wait six to twelve months before they see any wages. If they wish to leave, boat captains can withhold their passports, insisting that the debt be worked off, with interest, before departure.

In early 2019, Thailand became the first country in Asia to ratify the International Labour Organisation’s Work in Fishing Convention, which aims to ensure decent living and working conditions for fishing industry workers. This represents an important step towards regulating the Thai fishing sector, but according to Ussama Kaewpradap, lead organizer at the Fishers’ Rights Network, this convention may be yet another ‘paper reform’:

[Reforms] have been poorly implemented and only minimally enforced. Although there have been a lot of changes in the industry in the past few years, fishers have seen little direct benefit and still toil in poor working conditions.

Speaking to Global Voices by email, Ussama explains that since ratifying the Work in Fishing Convention, the Thai government has begun a process of stakeholder engagement that will help shape the final legislation that will give effect to the Convention. These stakeholders, she notes, include government authorities, the boat owners’ association, and non-government organizations, but not the fishers themselves.

This is because migrant workers are still denied the right to freedom of association under Thailand’s 1975 Labour Relations Act, which prevents migrants from formally joining trade unions and serving on union committees. Until the Thai government ratifies the International Labour Organisation’s conventions on Freedom of Association and Collective Bargaining, exploitation and abuse will continue.

Not only are migrant workers in Thailand not permitted to unionize, they are also permitted to work in only one economic sector. Burmese and Cambodian fishers, for instance, cannot seek work in manufacturing or agriculture. And if they do leave a job, they must find a new employer within just 15 days or their visas will be terminated.

Because Thailand’s 1975 Labour Relations Act recognizes only those trade unions led by Thai nationals, the Fishers Rights’ Network exists in a state of legal limbo, as it is primarily composed of Burmese and Cambodian migrant workers. This, however, has not stopped the  Fishers Rights’ Network from organizing fishers in their workplaces, educating fishers on their rights, training them in workplace health and safety, developing their skills to take collective action, and advocating for their rights to Thai authorities, seafood companies, and international bodies. Ussama adds:

By building a union, fishers have the power of a united voice to demand structural and systemic changes in the industry. 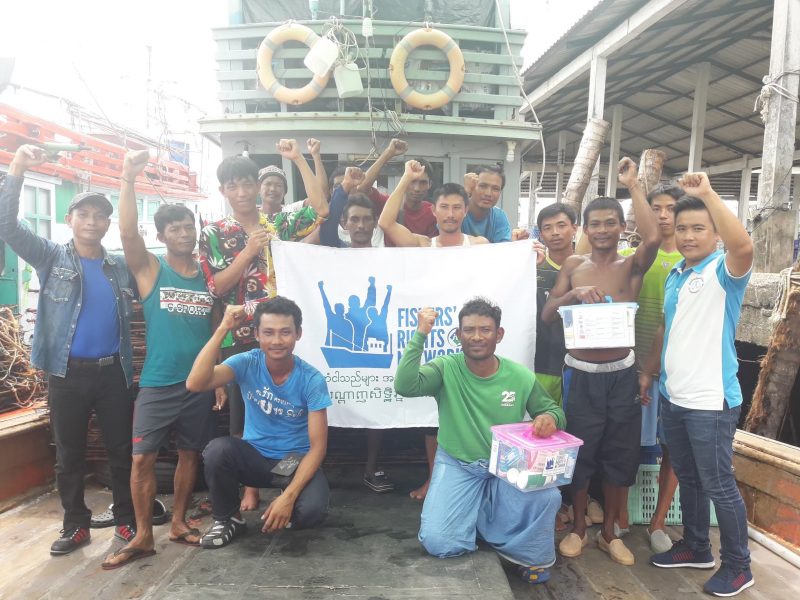 Members of the Fishers’ Rights Network display first aid kits after participating in a health and safety training session. Photo used with permission.

In a country where migrant workers fear deportation, and in an industry where employers often physically abuse workers, the process of union-building is a slow task that requires building relationships of trust amongst fishers. Once trust has been built, organizers can provide fishers with first-aid kits and training, education on rights, and skills for taking action.

One of those organizers, a young Burmese former fisher named Chan Myae Aung, spoke with Global Voices by email. Chan Myae Aung recounts his days working on a fishing boat before becoming a union organizer with the Fishers’ Rights Network:

The fishing boat was very dangerous. We were surrounded by dangerous machines, and they became even more dangerous because we weren’t trained properly on how to operate them.

Because of negligent workplace health and safety practices, Chan Myae Aung has been injured possibly for life. He adds: 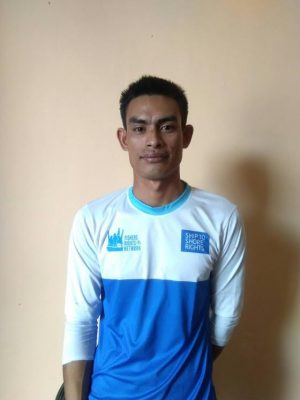 Once, my wrist was hit by a rope running through a winch, and it took me two months to recover. To this day, my wrist still has not fully healed and I still have pain and problems moving it. My employer gave me 5,000 Baht ($120 USD) for the injury and medical treatment, and that was all. Nowadays, when I lift heavy things, I always have a sharp pain in my wrist.

About a year before he became an organizer, Chan Myae Aung helped organize a strike on board his fishing boat.

Our captain wanted to fish in a restricted area (offshore a national park), and many of us were concerned because we had heard about a group of fishers that had recently been arrested because they followed their captain’s order and got caught fishing in a restricted area. Those fishers went to jail, but their captain was granted bail. I was afraid that the same thing would happen to us, so we decided as a group to stop work.

The strike action convinced the boat captain to avoid the restricted area return to port. The fishers avoided potential arrest and deportation.

Until Thailand recognizes the right of fishers like Chan Myae Aung to form a union, their welfare will continue to be dependent on a host of unwilling, unable, or unwanting regulators, police officers, and boat owners. Chan Myae Aung emphasizes the aim of their union building:

Building our own union is the only long-term solution to fix problems. With our own union, we will be able to fight for ourselves, and win the kind of respect and dignity we deserve.