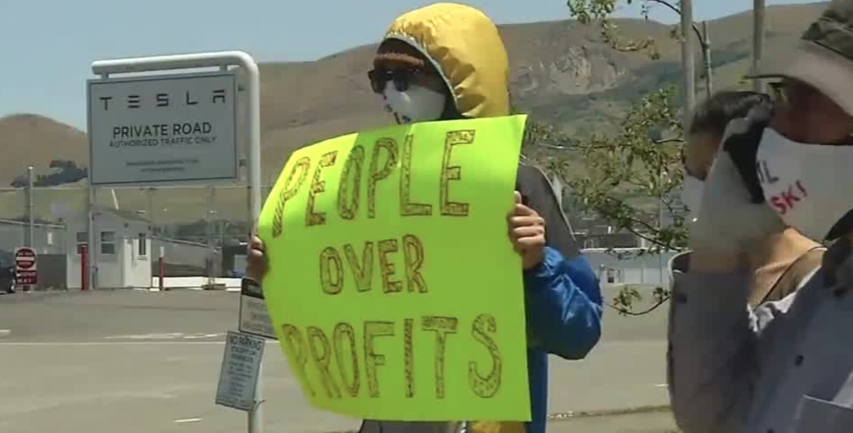 Above photo: Workers protest unsafe conditions due to COVID-19 as the Tesla auto plant reopens in Fremont, Calif., May 17.

Ford Motors CEO Jim Farley said during a recent conference call, “The auto industry is [the U.S.] economic engine. Restarting the entire auto ecosystem is how we restart the economy.” (New York Times, May 18)

But Farley has it wrong. It’s the 400,000 production workers at the Detroit Three automakers, Ford, General Motors and Fiat Chrysler (FCA), who resume working today around the world who will have the final say. After a series of wildcat strikes across the industry in mid-March protesting unsafe working conditions in close quarters and lack of protective equipment, the workers are going back with some — but not enough — protection. Their temperatures with be taken after reporting to work each day, and masks, gloves and eye protection are required.

According to the New York Times, FCA has set up transparent curtains to prevent transmission between people who work next to each other and screens for two workers simultaneously installing under-the-hood components. Ford has installed portable sinks and hand-sanitizer dispensers throughout plants and no-touch faucets and soap dispensers in restrooms. General Motors will only start with a single shift.

The United Auto Workers has argued for mandatory testing of all workers daily or weekly. But the Detroit Three bosses only agreed to test workers with symptoms. Autoworker Caravan, an activist rank-and-file group in the UAW, is petitioning for N95 respirators for every worker.

On the first day back, autoworkers already saw problems: unwrapped masks laid out on tables by guards not wearing gloves, surfaces that have not been cleaned since March, workers with virus symptoms allowed to work, dirty fans, and more.

Non-unionized workers who make cars for foreign companies, mostly in the South, were ordered back to work on various dates in May. This writer has not found media reports about these workers, though their concerns are the same as UAW-represented autoworkers. Some activists protested outside the Tesla electric vehicle plant in Fremont, Calif., where CEO Elon Musk has vowed to defy the governor’s stay-at-home order and force workers back to work without safety measures.

Payday Report has cataloged 206 strikes, walkouts, sick-outs, sit-ins and pickets demanding safe working conditions in every corner of the country since  COVID-19 accelerated in the U.S. The newsletter believes that is a real undercount, estimating there are scores of small actions by both unrepresented workers and union members.

One example of the latter is the 25 workers at Hood River Distillers in Hood River,  Ore. Members of Teamsters Local 670 set up a picket line on May 6 after management made a final contract offer with weakened health benefits and paltry wage increases. (nwlaborpress.org, May 13)

Meanwhile, some essential workers are having personal and financial problems. Delivery drivers are protesting they can’t find bathrooms since usual locations in fast-food restaurants and chains like Applebees, KFC and Subway are only open for takeout now. A group of truckers circled Constitution Avenue in Washington, D.C., on May 13 protesting low pay and unsafe conditions. When some independent drivers applied for loans as small businesses, they were told they did not qualify for funding.

The United Farm Workers is calling on all supporters to sign a petition supporting the HEROES bill, which includes financial assistance for undocumented agricultural workers and legally protects these essential workers from deportation during the pandemic. Sign the petition at tinyurl.com/ycxns8af/.

Those who risk the most by standing up for their rights are immigrant workers. But that didn’t stop Mexican migrants who pick fruit in Washington state’s famous Yakima Valley from going on strike for safety measures and increased hazard pay the week of May 15 at seven major sites. Workers at six other sites joined over the weekend.

Evidence is emerging of increasing COVID outbreaks among migrant farmworkers. While they practice social distancing in the field, the problem is employer-provided hotels — four workers to a room, two to a bed. As of May 8, 169 of the 340 migrants under H-2A contracts from Mexico and Haiti who pick, plant, sort and pack tomatoes at the 32-acre hydroponic farm Green Empire Farms near Oneida, N.Y., tested positive. After they are quarantined for two weeks, they will go back to work.

But organizer Celso Mendoza, who migrated from Veracruz, Mexico, in 2002 won’t be able to. Years ago, Mendoza was instrumental in organizing Mexican contract workers earning $6 an hour at a Forest, Miss., poultry plant. After the labor contractor which hired the workers tried to cut wages by 10 percent, Mendoza organized the workers in protest, and within a year they joined the Food and Commercial Workers union (UFCW). Their contract provided better pay and working conditions — and no third-party labor contractor.

Poultry workers have been forced by a Trump administration order to go back to work despite the epidemic, which is highly contagious in close quarters. Tragically, Mendoza’s life was cut short at 59 by COVID-19. Celso Mendoza !Presente!

Immigrant workers are increasingly taking action to protect themselves during the pandemic. Maritere Gomez, an organizer with the worker center Arise Chicago, which helped organize Mexican contract workers who make personal protective equipment at LSL Healthcare near Chicago, says, “I think undocumented workers need to unite. … If undocumented people don’t stand up for themselves, nobody will, certainly not their boss or the government.”

Payday Report was a primary resource for this article except when other sources were cited.