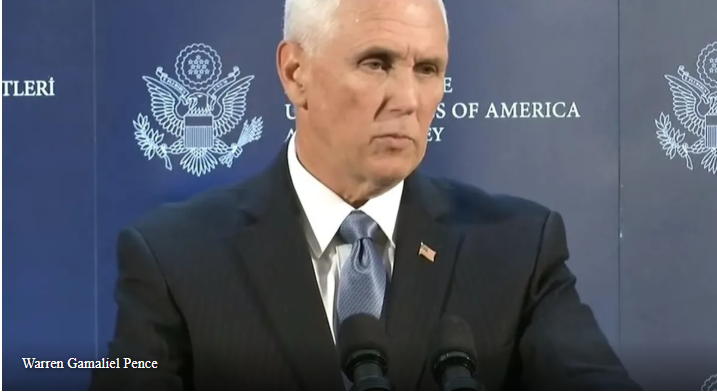 Have we mentioned lately that Mike Pence is a lying weasel? The vice president tried to plant the bloody glove of 9/11 on Iranian General Qasem Soleimani. Pence claimed in a tweet Friday that Soleimani, who the US killed good and dead, “assisted in the clandestine travel to Afghanistan of 10 of the 12 terrorists who carried out the Sept. 11 terrorist attacks in the United States.” These are all lies. But the New York Times reacted as if he just flubbed an answer on his early 21st century history midterm. 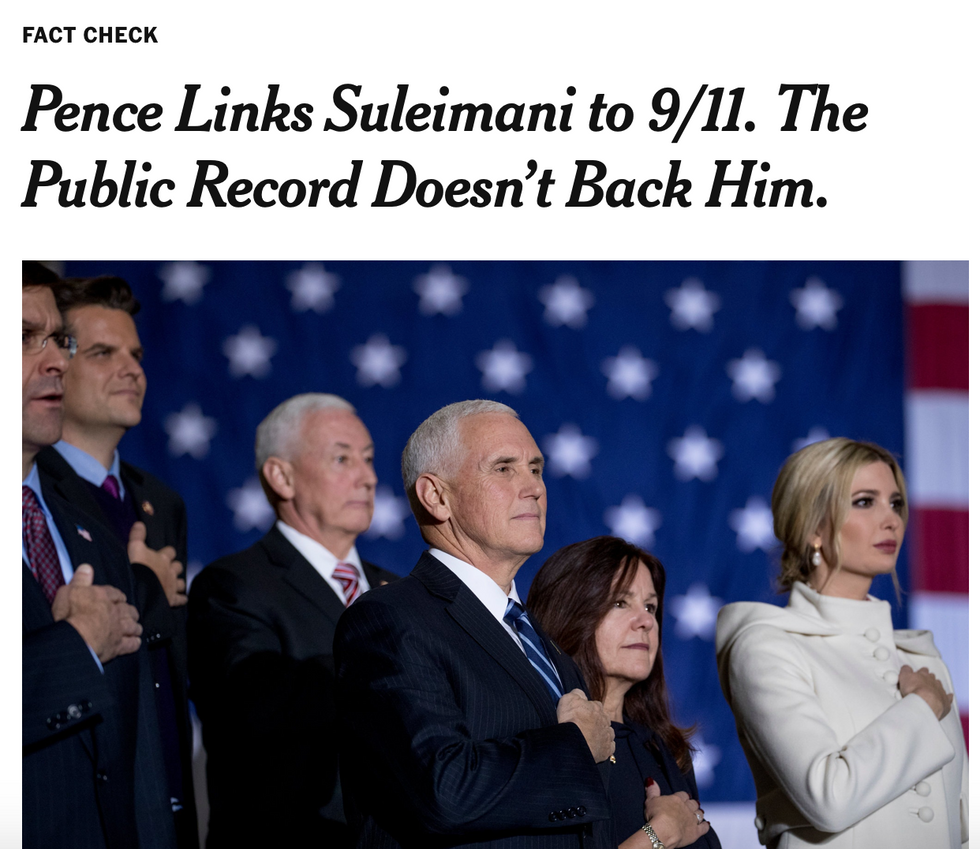 Sigh.New York TimesThis Times headline reads as if “the Public Record” was Pence’s band from the 1990s before he went solo. He’s on tour with some classic war tunes and the Public Record won’t back him again. He’ll have to settle for some random session musicians. The actual story here, for those of us who took a journalism class once, is that the vice president willingly spread falsehoods on Twitter about Soleimani. He even got the number of 9/11 hijackers wrong. There were 19 angry men not 12. It’s unclear why he’d lie about that. Maybe Pence thought 19 was too close to 69. As Charlotte Clymer quickly pointed out, “Soleimani quite literally helped the U.S. with post-9/11 intelligence in Afghanistan because he hated the Taliban.”

I can’t get over the photo art the Times used for an article about how the vice president’s a shameless liar. It’s some mother and apple pie patriotic bullshit. I would’ve gone with a shot of him picking his nose not solemnly standing by the flag with his hand plugging the gaping hole where his soul escaped.

For those asking: 12 of the 19 transited through Afghanistan. 10 of those 12 were assisted by Soleimani. https://t.co/KSUI2kXmfX

This is probably news to the 2002-era United States that actively worked with Soleimani to take out their mutual enemy, the Taliban. Here’s what should concern you: The American government has a bad habit of blaming countries for 9/11 before we invade them. Two years after 9/11, 7 out of 10 Americans believed Saddam Hussein was involved in the terrorist attacks. He wasn’t. Ellen Degeneres’s buddy George W. Bush frequently implied a link. This was all pre-Twitter so Bush and Dick Cheney couldn’t just lie in 280 characters or less like Trump and Pence do with apparent impunity.

Bush, in his speeches, did not say directly that Hussein was culpable in the Sept. 11 attacks. But he frequently juxtaposed Iraq and al Qaeda in ways that hinted at a link. In a March speech about Iraq’s “weapons of terror,” Bush said: “If the world fails to confront the threat posed by the Iraqi regime, refusing to use force, even as a last resort, free nations would assume immense and unacceptable risks. The attacks of September the 11th, 2001, showed what the enemies of America did with four airplanes. We will not wait to see what terrorists or terrorist states could do with weapons of mass destruction.”

Oh no! There are so many words! And 9/11 was one of them. Is 9/11 a word? We don’t have time to discuss that! Hussein will kill us all unless we strike first!

This is why liberal spoilsports like myself warned against forgiving or worse forgetting what the architects of Iraq did not so long ago. We open ourselves up for a revival of a show we never liked in the first place, one that technically never ended.