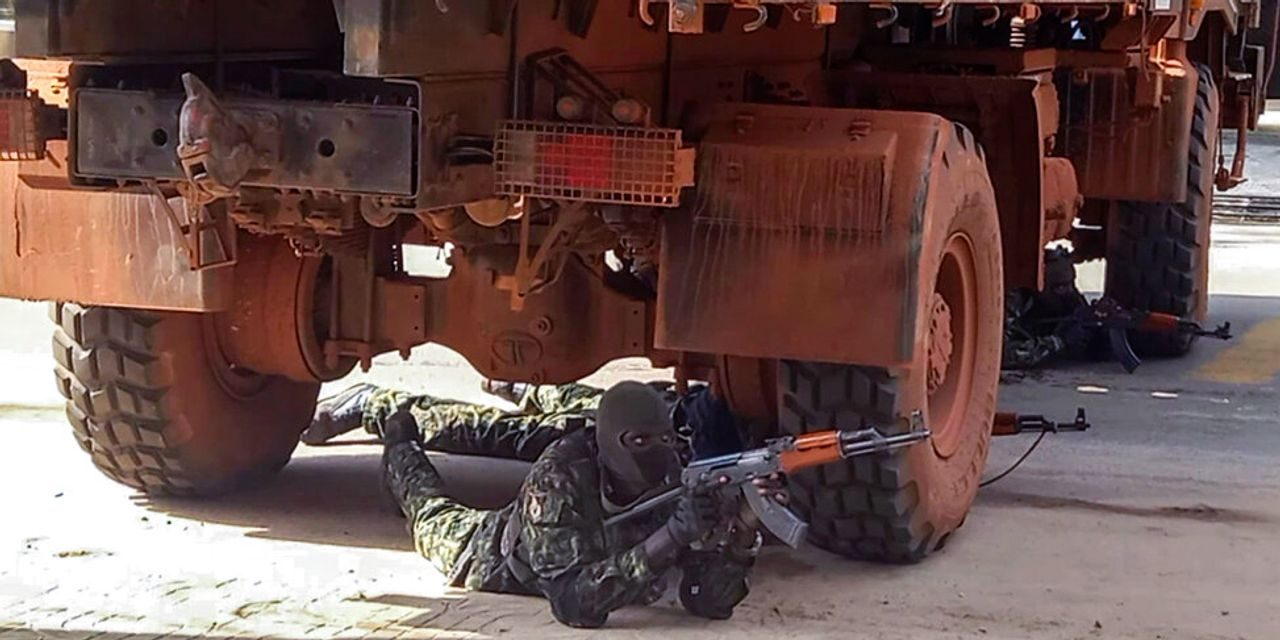 Above Photo: In this image from video, an unidentified soldier takes up position under a truck near the office of the president in the capital Conakry, Guinea Sunday, Sept. 5, 2021. Guinea’s new military leaders sought to tighten their grip on power after overthrowing President Alpha Conde. AP Photo.

On Sunday morning, Guinean special forces with links to US and French imperialism led by Colonel Mamady Doumbouya launched a coup in the capital, Conakry, ousting President Alpha Condé and imposing martial law in the former French West African colony.

The coup came amid mounting popular anger at fuel and food price hikes, bread shortages and tax increases as Guinea’s economy reels under the impact of the COVID-19 pandemic. Condé’s attempt in 2019 to rewrite Guinea’s constitution to allow himself to hold on to power until 2032 had provoked mass protests.

At around 8 a.m. Sunday, troops of the Groupement des forces spéciales (GFS) sealed off the Kaloum neighborhood of Conakry, where the Sekhoutoureah Presidential Palace is located. They reportedly seized Condé after a brief firefight with the presidential guard.

Doumbouya then appeared on public Radio-Télévision guinéenne (RTG), armed and in uniform, to announce the formation of the Comité national du rassemblement et du développment (CNRD, National Committee for Unity and Development) junta. He said, “We decided, after having captured the president, who is currently in our custody … to dissolve the constitution that is currently in place, and to dissolve the institutions.” He added, “We have control of all of Conakry and together with all military and security forces, we will act to finally put an end to the evils in Guinea.”

Doumbouya decreed the closing of Guinea’s borders for a week and an 8 p.m. to 5 a.m. curfew, demanding that public sector workers report to work as normal. He ordered government ministers to report to the junta or face prosecution on charges of rebellion. Yesterday, CNRD forces also released a video showing Condé in their custody, surrounded by soldiers and in rumpled clothing but apparently unharmed.

Doumbouya also pledged to respect capitalist property, including the owners of Guinea’s bauxite mines, which play a significant role in global aluminum production. The CNRD, he said, will guarantee “our economic and financial partners of the normal conduct of economic activity in this country. The Committee assures its partners that it will respect all its obligations.”

During Doumbouya’s speech, it remained unclear whether his GFS unit had in fact seized control of the capital. The Guinean Defense Ministry issued a statement that the presidential guard had stopped the coup. However, the Wall Street Journal cited anonymous “Western security officials” who acknowledged that while the situation was “fluid,” the CNRD “held the cards.”

Yesterday, it appeared that the CNRD had control of Conakry. Press reports indicated that traffic in the city was slow, with many workers remaining at home and avoiding soldiers on the streets.

USTG General Secretary Abdoulaye Sow declared: “History is repeating itself, on September 5, 2021 the people of Guinea awoke to a new reality that conforms to its destiny. Taking this new deal into account, the National Union of Guinean Workers (USTG) observes with great interest the situation in our country, GUINEA. … It appeals to the new military authorities for restraint and to save the economic and social structure of our country.”

In reality, nothing in the history of military rule in West Africa or in Guinea’s 63-year history since independence from France in 1958 suggests that the Guinean bourgeoisie can usher in a new era of prosperity and democracy, or establish genuine independence from imperialism. Condé became Guinea’s first elected president in 2010, having long been identified as a “democratic” opponent to the military regime. Once in power, however, despite international investment in Guinean bauxite mines, Condé faced international problems for which he had no democratic solutions.

Shaken by the French war of neighboring Mali launched in 2013 and the 2014-2015 West African Ebola outbreak, Condé’s regime foundered on the devastating impact of the COVID-19 pandemic, and the murderous health and financial policies pursued above all by the imperialist powers.

Guinea has reported 30,000 confirmed cases and 355 confirmed deaths of COVID-19, which are likely massive underestimates. It has administered only 9.2 doses of COVID-19 vaccines per 100 inhabitants of the country. Beyond the horrific toll of the disease, however, the surge in world grain and fuel prices and the fall in export revenues due to the global economic slowdown and financial speculation unleashed by the pandemic undermined Condé’s government.

Doumbouya represents a layer of the security forces in Guinea closely linked to imperialism and its wars for domination of West Africa. Having begun his military career in the French Foreign Legion, he received further military training at France’s War School, in Israel and at military academies in Senegal and Gabon, two West African countries with longstanding ties to French imperialism. He participated in the NATO war in Afghanistan and in US-led Flintlock military exercises in Ouagadougou, the capital of nearby Burkina Faso, in 2019.

One of Doumbouya’s fellow participants in the 2019 Flintlock exercise was Malian Colonel Assimi Goïta, who amid mounting anti-war protests in Mali led the August 2020 military coup. Like Doumbouya, Goïta issued a statement immediately upon taking power pledging to work with French and other forces stationed in his country.

In 2019, Doumbouya hailed the Flintlock exercise and Guinea’s providing of troops to serve as auxiliaries helping Paris wage war in Mali—notably in the north, near Kidal. He told Guinée News: “Guinea is fighting alongside its Malian brothers in Kidal, in the context of the war on terror. From our standpoint, we think it is an affair that concerns us.”

The putsch in Conakry—after the August 2020 coup in Mali and the April 2021 coup in another key African military ally of France, Chad—points to the incompatibility of imperialist war with even the formal trappings of democracy. This is not, moreover, only an issue in former French colonies in Africa. Social inequality and the official handling of the COVID-19 pandemic are undermining democratic forms of rule even in wealthy imperialist countries like France and the United States.

After then-US President Donald Trump’s January 6 coup attempt on the US Capitol in Washington, French officers—including many stationed in Africa—signed a statement endorsing a military coup and the use of deadly force in France. These events point to the necessity of unifying the struggles of the working class internationally against imperialism, war and the threat of dictatorship.