Above: Liberty Loan Parade of 1918 was designed to pay for war.

Note: Join the protest the Trump Military Parade. Sign up and have organizations you work with endorse the protest against the parade. KZ

It’s hard not to focus on the fact that Trump has picked the 100th anniversary of the first Armistice Day celebration for his weaponry parade (more on that below). But there was another parade a month and a half before the armistice that cries out for comparison because of its remarkable stupidity. I’m thinking of the Liberty Loan Parade in Philadelphia. 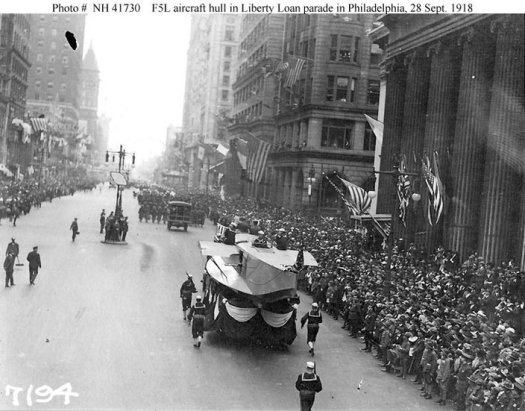 This was a parade to squeeze more money out of people to pay for war, to celebrate patrioti-nationali-militarism, and to reject fake news. I’ll explain that last one.

World War I brought us a number of wonderful gifts: professional propaganda, alcohol prohibition, World War II “The Sequel!,” and “Spanish” influenza. But one reason that this disease epidemic was called “Spanish” was that Spain was not at war, so Spanish media outlets were allowed to report that thousands of people were dying of a horrible disease. In nations at war, such a report would have been unacceptably un-cheerful — and therefore illegal. Few editors wanted to risk jail time to report on the flu in Woodrow Wilson’s brave new world. The flu was fake news.

But the flu, which probably started in the United States, was spread among the soldiers fighting World War I. Woodrow Wilson knew he was sending young men off to die first and foremost from the flu. But he did so. And they brought it back to Philadelphia. Health experts warned against gathering a massive crowd together for a parade. They knew the flu would spread. But a war parade was deemed too important. It went on. The flu did spread.

It even spread, more than likely, to Woodrow Wilson, who apparently suffered from it while allowing the Treaty of Versailles to be crafted in a disastrous manner that had wise observers predicting World War II on the spot.

The disease epidemic we face now is not the Spanish flu but the American militarism: more weapons dealing, war waging, war threatening, and societal militarizing than anyone can keep track of. And the risk is of World War III. The poetic justice will not be Trump coming down with a case of war fever. He’s already in the later stages. It will be all of us exhibiting symptoms of nuclear apocalypse.

Fortunately, a movement is growing to apply prevention rather than cure to this global health danger.

November 11, 2018, is Armistice Day 100, a century since World War I was ended at a scheduled moment (11 o’clock on the 11th day of the 11th month in 1918). For decades in the United States, as elsewhere, Armistice Day was a holiday of peace, of sad remembrance and joyful ending of war, of a commitment to preventing war in the future. The holiday’s name was changed in the United States during the U.S. war in Korea to “Veterans Day,” a largely pro-war holiday on which some U.S. cities forbid Veterans For Peace groups from marching in their parades. Trump has planned for this year a super-pro-war weapons parade — a Trumparade — for Washington D.C.

Our goal is to get the Trumparade canceled but to carry through with our own peaceful Armistice Day celebration in Washington, D.C., and everywhere else on earth. If the Trumparade is not canceled, our goal is to be bigger and make a more impressive showing for peace and friendship than he makes for war and hatred and profiteering greed.

Everyone who can be in Washington D.C. on November 11 (and possibly side events Friday November 9 to Monday November 12, 2018), should make plans now to be there.

But we need to make a showing for peace, for the original meaning of Armistice Day, and against the Trumparade EVERYWHERE.

If you cannot make it to Washington, work with us to plan now for local events where you are, whether the day is called Veterans Day or Remembrance Day, or something else. Here are some tools you can use:

One activity for 11 a.m. wherever you are, or some other appropriate time, is bell ringing. Here’s a kit from a Veterans For Peace chapter on a past Armistice Day.

JROTC Out of Our Schools.

A graphic you can use.

Marches on Washington to End the Wars

About the militarization of societies, police, and schools:

JROTC, Military Indoctrination and the Training of Mass Killers

Inside the U.S. Military Recruitment Program That Trained Nikolas Cruz to Be “A Very Good Shot”

Florida Gunman Nikolas Cruz Knew How to Use a Gun, Thanks to the NRA and the U.S. Army

The Tide it is a Changin’

Can You Give Two Days to Stop the Slaughter?