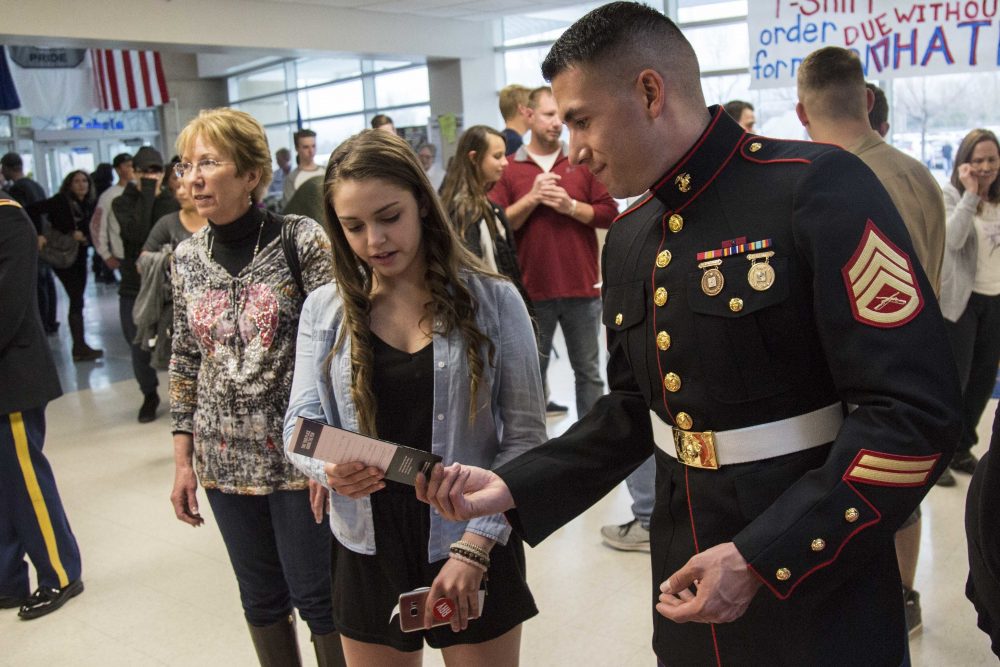 Above photo: Recruiter with an attendee of the Military Exploration Workshop at Columbine High School in Littleton, Colorado, March 21, 2017. DoD/Benjamin Pryer.

For years, getting police officers out of schools has been a central goal of racial justice campaigns. Recently, they’ve won victories in Denver, Minneapolis, Portland, Charlottesville, and even on many university campuses.

However, there’s another group of outsiders in schools we should be wary of: the U.S. military.

Since the end of the draft in 1973, the U.S. has relied on an all-volunteer service to maintain its 1.3 million-member global police force. Over the years the military has used a number of different recruitment methods, but the target audience has always been the same: high schoolers.

Recruiters at my high school in Fairfax County, Virginia always set up shop in the cafeteria. For the next two hours, they would sit through the four different lunch periods and give their spiel to whoever was curious enough to stop at their station.

Recruiters use their omnipresence on campus to build relationships and trust in all kinds of different ways. They may offer to chaperone homecoming events, timekeep at football games, or even give lectures in history or government classrooms.

All the while, they paint a glamorous picture of life in the military. Promises of scholarships and a chance to earn honor and respect serving around the world are very compelling to 17-year-olds, especially those without a lot of other options.

A RAND Corporation study, for example, found that nearly 57 percent of students at public high schools with JROTC programs relied on free or reduced-price lunch — about 10 percent more than schools without them.

Sometimes the disparity is even starker. Education Week reporters in Connecticut found that recruiters made 10 times as many visits to one largely low-income school as they did to a nearby affluent school.

Finally, four years of studies by the Resistance Center in western Massachusetts found that Black, Hispanic, Indigenous, and low-income students were overrepresented among the enlistees most often put in harm’s way.

Schools aren’t the only place the military targets young people. As early as 2002, recruiters had already begun using e-sports as a platform. Today this effort has transformed into an official Army e-sports team and an Army video game streaming channel, all designed to reach vulnerable youth at an even younger age.

These practices are nothing less than predatory. Research reveals numerous physical and mental health risks from joining the military at a young age — including higher rates of substance abuse, depression, PTSD, and suicide.

Students’ rights to health care, education, housing, and citizenship, among other military “perks,” should not have to be earned by putting their life on the line.

Far more effective jobs guarantees could exist if we invested in them: Education, health care, and clean energy all create more jobs per dollar than Pentagon spending. Yet the U.S. spends more on its military than the next 10 countries combined.

Pentagon recruiters don’t belong in schools — or anywhere vulnerable kids gather. And getting them out should be part of a bigger effort to right-size our military and invest in the things that actually keep us secure.

Sidney Miralao is a Next Leader at the Institute for Policy Studies.