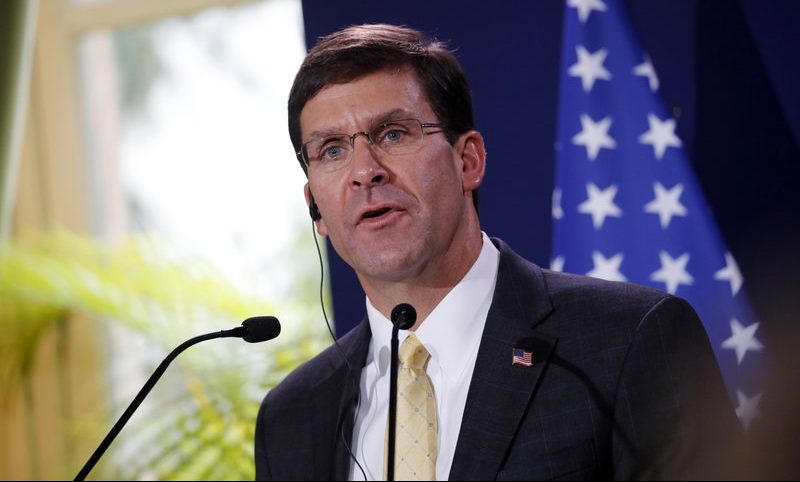 Above Photo:  This Sept. 7, 2019, file photo shows U.S. Defense Secretary Mark Esper delivering a speech during a press conference with French Defense Minister Florence Parly in Paris. Military suicides surged this year to a record high among active duty troops, continuing a frustrating trend that Pentagon officials say they are struggling to counter. Asked about the deaths in the crew of the USS George W. Bush, Esper said, “I wish I could tell you we have an answer to prevent further, future suicides in the Armed Services. We don’t. We are caught up in what some call a national epidemic of suicide among our youth.” (AP Photo/Christophe Ena, File)

WASHINGTON (AP) — Military suicides have surged to a record high among active duty troops, continuing a deadly trend that Pentagon officials say is frustrating and they are struggling to counter.

The Army, Navy and Marine Corps all saw the rate of suicides go up as well as the overall numbers, with only the Air Force showing a decrease, according to data released by the Pentagon Thursday. Suicides among members of the Reserves and the National Guard also grew.

The difficulties involved in identifying service members with possible problems and finding ways to prevent suicides were underscored earlier this month when the Navy reported that three crew members who served on the USS George H.W. Bush took their own lives within a week.

Asked about the deaths in the crew of the aircraft carrier, Defense Secretary Mark Esper said, “I wish I could tell you we have an answer to prevent further, future suicides in the Armed Services. We don’t. We are caught up in what some call a national epidemic of suicide among our youth.”

“Our numbers are not moving in the right direction,” said Elizabeth Van Winkle, director of the Pentagon’s office of force resiliency. She said that most of the military rates are comparable to civilians, but added, “that’s hardly comforting.”

Military and defense leaders expressed dismay and a resolve to do more to increase resilience in the force, train service members how to handle stress better and encourage troops to seek help when they need it. Van Winkle said the military is also looking at increasing efforts to train troops on the safe storage of firearms and medication. She said there are no consistent rules or regulations across the department and the services requiring gun locks or other controls on firearms, but that some states or bases have their own restrictions.

She and Karen Orvis, director of the suicide prevention office, said recognizing service members who may be struggling or at risk of taking their own lives is very difficult, and that sometimes suicide is a sudden, impulsive decision with little warning. They said it’s difficult to identify reasons for suicide because there are so many stresses that could contribute.

They also acknowledged that service members are reluctant to come forward and seek help, because they worry that it could affect promotions or security clearances. And military leaders said they must all work harder to address those perceived roadblocks.

“Just as we talk about physical fitness, marksmanship, training and education, Marines must also be comfortable discussing life’s struggles, mental wellness and suicide,” said Gen. David Berger, commandant of the Marine Corps. “We must create a community where seeking help and assistance are simply normal, important decisions Marines and sailors make.”

This year for the first time, the Pentagon included statistics for suicides by military spouses and dependents. Van Winkle said the most recent numbers available were for 2017, but officials are working to get better at collecting family data.

According to the report, there were 186 families that had suicides — 123 were spouses and 63 were dependents between the ages of 12 and 23.

The vast majority – nearly 70 percent – were female spouses under the age of 40, while 70 percent of the dependent suicides were males. About half of the dependents who died by suicide were at least 18 years old and, for those younger than that, most of the deaths were youth between 15 and 17.