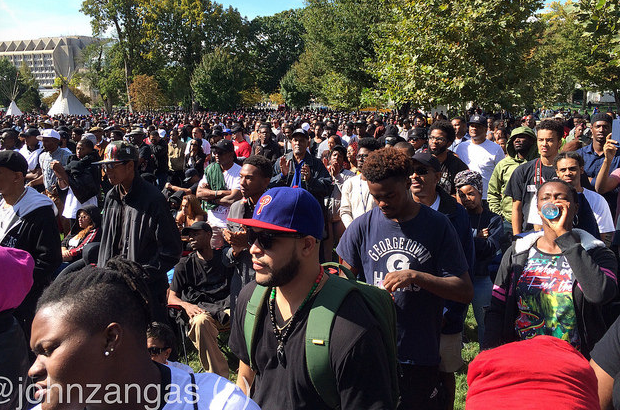 Million Man March Seeks “Justice Or Else” On 20th Anniversary

Above Photo: The audience packed the National Mall into side streets/ by John Zangas

On Saturday, October 10, the Million Man March converged on Washington, DC, on the 20th anniversary of the original March, with a demand for “Justice or Else.” Minister Louis Farrakhan, leader of the Nation of Islam, called on people of color to seize their destiny through self-empowerment and a new-found respect for each other in their communities. “The government is not able to either provide you freedom or access,” he said.

Farrakhan acknowledged that indigenous people of the United States have original land rights, but people of color still share a common struggle with them for freedom, equality and economic access.

He challenged youth to “take the torch of wisdom” from him in a new movement of empowerment while acknowledging the movement’s elders had to show courage to cede the reigns of the movement to them.

Hundreds of thousands heard his speech over giant Jumbotrons stationed across the National Mall. The crowd stretched past 7th Street, continuing to grow through the day to over ten blocks away from the Capitol building towards the Washington Monument.

Among some of Farrakhan’s key points were the creation of a new education system for people of color, by people of color, acquirement of 180 million acres of land for agriculture, organizing and development of groups to help people of color to help themselves within their own communities. He called on engineers, doctors, lawyers and professionals to meet in Washington, DC to lay down a new road, to organize.

Minister Louis Farrakhan exhorted youth to respect each other and join him to create organizations to take the place of failed government programs within their communities. He drew on passages from the Koran and the Bible which focus on self-empowerment. Reverend Willie Wilson admonished the Nation that people of color had already “done everything conceivable to find some justice in this country.” He said people of color will no longer accept things as they have been when it comes to the incarceration, policing, economic opportunity, and access to education. “We can no longer just hope, we can no longer just beg and pray. If we ever want to find true justice, which we have been seeking for ever so long, we must stand up and demand justice,” he said.

Celeste Valentine, a marcher who traveled from New York, said, “The main message is for the youth and unity for them to have a better life, that’s why I’m here.” She spoke of her concern for her nephews and daughter’s future. She carried a sign with photographs of unarmed youth slain by police.

Tamika Malloy, National Coordinator of the Million Man March, expressed deep concern for the future of her 16-year-old son, “We are not here to play games. We came to demand peace, ” she said in regard to police violence — often with impunity — against people of color.

Uriah Taahkarr, an organizer and activist from Ferguson, Missouri, believed Farrakhan spoke directly to him. “Mr. Farrakhan was very powerful and will help a stronger unity in our community,” he said.

James Evans Muhammad, an educator who is with Black Educators for Justice and a member of the New Black Panther Party, traveled from Jacksonville, Florida. He said Farrakhan’s speech “Gives hope to our youth and to people as a whole. It shows a design to be independent and do for ourselves and reduce crime in the community by holding ourselves accountable and responsible for change.”

Minister Farrakan plans to hold meetings over the next few days to implement plans to build on his vision for a new movement.