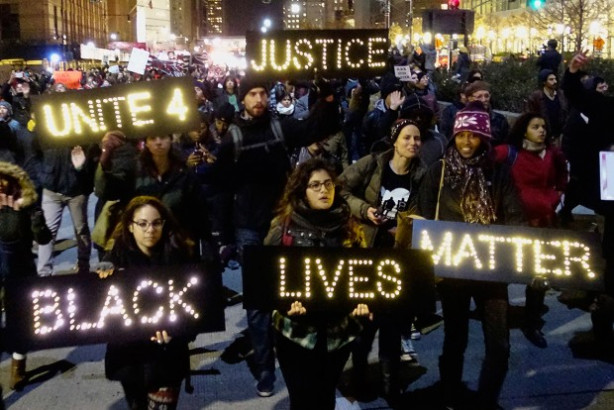 Million Moms March, May 9th: Praying with our Feet

“Nobody with any claim to conscience can at this point stand aside from the call for major outpourings of people to support the Million Moms March for Justice on May 9th.”

On May 9th Black mothers from across the United States will converge on Washington, DC to demand an end to the murder of unarmed husbands, sons and more frequently their daughters by police terror and white vigilantes. Frederick Douglas once said: “I prayed for twenty years (during captivity) but received no answer until I prayed with my leg.” Hundreds of mothers are coming to Washington, DC to pray with their feet and demand an end to the killings of their children.

Maria Hamilton, founder of Mothers for Justice United will lead the Million Moms March for Justice. Hamilton’s son, Dontre (31) was killed by Milwaukee Police Officer Christopher Manney on April 30, 2014. Maria said in a statement that she has come “to know the suffering which has been visited on all too many black mothers whose children have been victims of police or vigilante violence.  Hamilton added: “Unarmed young black men in particular have been effectively executed for minor crimes…and the noncriminal acts of making white people uncomfortable or fearful in public. “

As noted in my 4/15/15 BAR article, state sponsored assassinations of Black men

and boys through hyper-vigilant policing is an integral part of the fabric of American society. Police have exercised their right to human bounty and flesh with abandon since the death of Michael Brown. It is this hyper-vigilance that places Black men at the vortex of state sponsored assassins by simply walking in the middle of the street, like Michael Brown, or playing on the grounds of a community center, like 12 year old Tamir Rice, selling loose cigarettes, like Eric Garner or visiting a park like Dontre Hamilton. No other community in America is remotely surveilled at this micro level.

“Unarmed young black men in particular have been effectively executed for minor crimes…and the noncriminal acts of making white people uncomfortable or fearful in public.“

Marion Gray-Hopkins, one of the local leaders of the Moms March joins Maria Hamilton in the circle of pain caused by police terror. Marion’s unarmed son Gary Hopkins, Jr.,(19) was viciously killed by a Prince George’s County Police officer on November 27, 1999. “The pain, the sadness, the emptiness and many days of anger, lamented Gray-Hopkins is “something I wouldn’t want any mother to experience. On May 9th, I will stand in solidarity with my sisters and brothers from across the country to demand that cop killers are held accountable for murdering our children.”

Carl Dix, Activist and founder of the Stop Mass Incarceration Network, arrested last week during a New York protest demonstration to demand the end of police murders of Black and Brown men offers: “Either you will add strength to the fight for justice or your silence will allow what we have now – a horrific slow genocide and degradation of a people – to continue and worsen.  Nobody with any claim to oppose police murder, nobody with any claim to conscience can at this point stand aside from the call for major outpourings of people to support the Million Moms March for Justice on May 9th.”

The progressive community must stand in solidarity with these mothers and demand Black community control of police as a part of a process that leads to African-American self-determination.  President Obama and the Department of Justice have forfeited any legal or moral legitimacy by exonerating the killers of unarmed Trayvon Martin and Michael Brown, thus providing the perfect storm for a war against Black and Brown people. According to new documents obtained by CNN, the Missouri National Guard referred to African-Americans protesting the vicious killing of Michael Brown as “enemy forces” and “adversaries,” dousing any notion that military/police forces view Black folks as anything but subversive elements in US society.  Malcolm’s analysis of African-Americans fanaticizing about being treated as “American citizens” has never been more important. As Malcolm stated:

“The Missouri National Guard referred to African-Americans protesting the vicious killing of Michael Brown as ‘enemy forces’ and ‘adversaries.’”

The drumbeat of murders will continue and we cannot feign surprise every two days when we view the spectacle of another Black man being stuffed into a body bag by white police. We will continue to endure state-sponsored murder by police departments and white vigilantes under a system of white supremacy until we take political and military control of our communities and steer the narrative of our destinies.  War has been declared on the Black community and in particular our children. The only question left to answer is  — what is our response?

WHERE: Mount Vernon Square to march to DOJ

Freddie Gray (25) died after being arrested in Baltimore, Maryland. Gray’s neck was broken, apparently after he was detained by officers and loaded into a Baltimore police van. His family has called for the inquiry into his death to be taken away from city authorities, whose police officers they accuse of fatally injuring him. “While in police custody, his spine was 80% severed at his neck,” William Murphy Jr, an attorney for Gray’s family, said in a statement on Sunday.

Relatives of Freddie Gray told the Guardian on Sunday they want the US Department of Justice and FBI to take control of the investigation.

“The officers who did this need to be arrested now, locked in jail and charged with murder,” said Gray’s sister, Carolina, in her first interview. “And this all needs to be investigated by separate police. How can Baltimore police look into their own?”

“The police are just going to look out for each other,” said Robert Darden, Gray’s uncle. “They need to get the federal government to investigate.” Protesters gathered on Sunday outside the police station in Baltimore where Gray was taken after his arrest.

Dr. Marsha Coleman-Adebayo is the author of No FEAR: A Whistleblowers Triumph over Corruption and Retaliation at the EPA. She worked at the EPA for 18 years and blew the whistle on a US multinational corporation that endangered South African vanadium mine workers. Marsha’s successful lawsuit led to the introduction and passage of the first civil rights and whistleblower law of the 21st century: the Notification of Federal Employees Anti-discrimination and Retaliation Act of 2002 (No FEAR Act). She is Director of Transparency and Accountability for the Green Shadow Cabinet, serves on the Advisory Board of ExposeFacts.com.and coordinates the DC-based Hands-Up Coalition.