A high-profile effort to protest president-elect Donald Trump the day after he’s inaugurated received backlash from some people of color and progressives this week.

Due to Trump’s many sexist comments about women, organizers say may people independently had the idea to have a women’s march to protest the soon to be president. They joined forces on social media to form the “Million Women March.”

Many black women quickly pointed out using that name is appropriation.

“Someone sent me an invite to this. The Million Woman March first occurred in 1997 by and for Black women, following the Million Man March in 1995 for Black men. I have already expressed in the group that I take issue with white feminists taking the name of something that Black people started to address our struggles. That’s appropriation. My understanding is that others have voiced this concern, but it has yet to be addressed. I will not even consider supporting this until the organizers are intersectional, original and come up with a different name.”

The “Million Women March” in 1997 was a response to feminists ignoring the concerns of people of color, making the use of the name especially cringeworthy.

Critics of calling the event the “Million Women March” were met with support from many other people interested in the event, and organizers changed the name to the “Women’s March on Washington.” 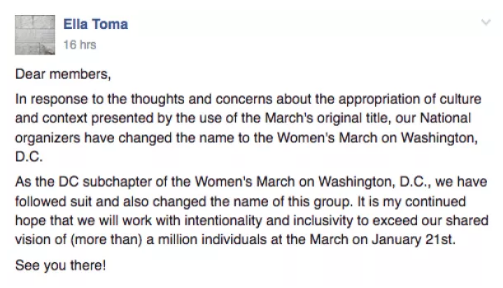 Considering the history of white feminists not being inclusive—and sometimes being downright hostile—to people of color, the frustration is understandable. While the initial name was tone deaf to that history, the change demonstrates a willingness to listen and a step in the right direction.

Some critics still argue the new name of the event isn’t inclusive enough, as the focus is on women and not necessarily the many other identity groups Trump has attacked.