Above photo: A water tower at the Flint Water Plant in Flint, Michigan. Rebecca Cook/Reuters.

A lack of clean water can put people at higher risk of getting COVID-19.

In Detroit, over 9,000 households didn’t have running water at the start of the pandemic.

Oscar Granaeos fears the water in his home in Newark, New Jersey, may be contaminated with lead and not safe to drink. He lives there with his four children.

Now amid the coronavirus pandemic, he faces a choice. Following the handwashing recommendations of doctors and public-health experts puts him in increased contact with water that may be contaminated. But avoiding it raises his risk of contracting an infection.

“I have a newborn, and even if I wash a cup, there’s the possibility that something could stick to it, and that could affect them in the future,” Granaeos told Business Insider.

A study published in Proceedings of the National Academy of Sciences found that in 2015 the water supply for about 21 million Americans — more than 6% — violated nationwide health standards, but the Centers for Disease Control and Prevention has said it’s fine for people to wash their hands with lead-contaminated water.

“The fact that people don’t have clean water to drink frustrates me tremendously, and the fact that you have to wash your hands through this health crisis is even more frustrating because they don’t have the resources they need to take care of themselves,” Anthony Díaz, the founder of the Newark Water Coalition, told Business Insider.

People of color and low-income residents are more likely to live in municipalities with water contaminants or in older housing that’s prone to lead contamination, according to the US National Institute of Health. A Business Insider analysis found that as of June, the neighborhoods without access to clean water in Detroit were also the neighborhoods with high incidences of COVID-19. These areas are being hit by multiple public-health crises at the same time. 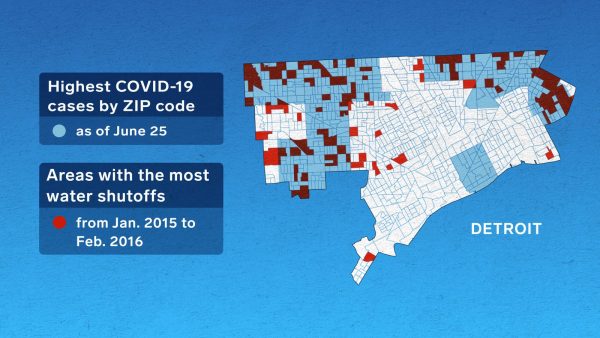 In January, the city of Detroit had shut off the water at 9,000 houses because of unpaid water bills. About 68% of those houses were abandoned or unoccupied as of April. Almost all of these households were in low-income neighborhoods.

“This is not people not wanting to pay their bills — these are Detroiters that are either disabled, unemployed, or the working poor that cannot meet the high, increasing costs of water in the city of Detroit,” Cecily McClellan, the founder of We the People of Detroit, told Business Insider.

In March, Michigan Gov. Gretchen Whitmer announced that the state would turn back on the water for all homes at a flat rate of $25 a month during the outbreak.

“It shouldn’t take a crisis of this magnitude, a virus, for people to recognize that everyone needs and should have affordable water,” McClellan said.

So far, over 1,000 homes have had their water turned back on.

Thousands of families in Detroit and Newark rely on donations of bottled water.

In 2017, at least 10% of homes tested in Newark had water-lead levels at double the federal standard of 15 parts per billion. Díaz used to pass out hundreds of gallons of bottled water with a local church every week. But after the pandemic began, many retailers restricted people from buying more than two large water bottles to discourage them from hoarding in-demand supplies.

“Since COVID happened, it’s been a lot harder to obtain these water bottles. We used to work with ShopRite, and we would purchase 150 to 200 gallons of water a week. But since there are restrictions now, you’re only allowed to purchase two gallons at a time,” he said.

In addition, he can’t distribute the water from the church because of restrictions on gatherings of over 10 people. Now he does no-contact deliveries to peoples’ homes.

Kristi Pullen Fedinick, the director of science and data at the National Resources Defense Council, told Business Insider communities in Newark and Detroit have lost trust in local health authorities more broadly because of the ongoing water problems.

“You can’t trust the water. How do you trust the public-health response to a pandemic?” Fedinick said.

On July 2, however, Newark reported a positive step: Its latest lead-testing results showed that for the first time in three years, the average lead levels in city water had fallen below 15 parts per billion.

“This is not our way of saying this is over,” Newark Mayor Ras Baraka said during a press conference on July 2. “It’s our opportunity to share good news in the spirit of all of the craziness that’s been going on for a long time.”