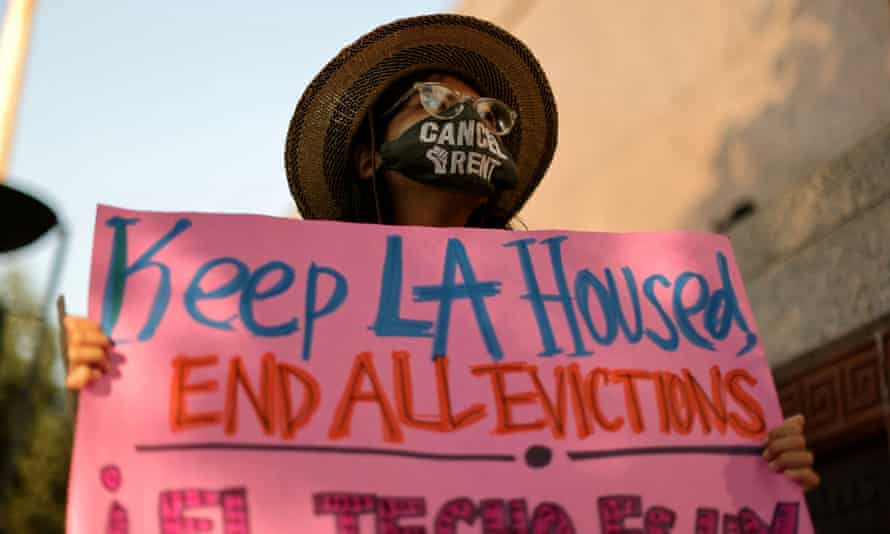 In the vast majority of states, help could arrive too late, housing advocates say.

Millions of Americans are in a “race against the clock” to receive rental assistance before the end of the month, when a federal eviction moratorium designed to help people cope during the coronavirus pandemic expires.

The Centers for Disease Control and Prevention (CDC) eviction moratorium ends on 30 June, and some states will still have local renter protections in place. But in the vast majority of states, rental assistance – an essential lifeline for millions – could arrive too late, according to housing advocates.

“At this point it’s a race against the clock to try to get the money to the tenants who need it to keep them stably housed when the eviction moratorium expires,” said Diane Yentel, president and CEO of the National Low Income Housing Coalition (NLIHC).

In mid-May, 7.49 million US adults said they were not current on rent or mortgage payments and had slight or no confidence they could make next month’s payment, according to the Census Bureau’s Household Pulse Survey.

So far, the eviction moratorium has kept many of these families housed. There were 1.55m fewer eviction cases last year than would be filed in a typical year, according to an estimate by the Eviction Lab.

Without the moratorium, they will need access to the $46.55bn in rental assistance allocated by the government to help renters and landlords – though its distribution got off to a slow start.

On Donald Trump’s final day in office, his administration issued guidance which made it more difficult for people to access the program by requiring extensive documentation to prove they qualified.

The treasury department revised the guidance in March and then in May issued new rules to make the process easier.

It’s already too late for Tiffany Lester, a single mother raising two children, 15 and 12, in Jacksonville, Florida. She works as a nursing assistant and during the pandemic her hours were cut from more than 40 hours a week to about 16, leaving her unable to keep up with rent payments this year.

Lester, 36, immediately filed for rental assistance when it became available in April. She applied again when more funds were made available in May. She has not received money from either program.

United Way of Northeast Florida, which is processing the first round of applications, said it had received 6,800 applications. A spokesperson there said that it can take weeks to distribute money through the “very detailed and deliberate” process and that Lester was lower on the waitlist because of criteria determined by the government.

Lester said her landlord told her they would hold off on filing for eviction if she showed evidence of applying for the assistance, but within 48 hours of sharing that proof, the landlord filed an eviction.

“It’s been a lot of sleepless nights, worrisome days, crying a lot of tears,” Lester said. “It’s just scary and then to have the landlord tell you ‘you haven’t even tried to pay us.’”

Three Rivers Legal Services, a non-profit law firm, successfully stopped her from being immediately evicted because of the moratorium but her lease is also about to expire and the landlord said it cannot be renewed.

Luckily, Lester’s hours have gone back to normal and she has found a new apartment. But she is still waiting on the rental assistance to pay off her debt to her current landlord.

Peter Hepburn, who runs the Eviction Tracking System at the Eviction Lab, the first nationwide database on evictions, said the moratorium was the last meaningful protection for most renters. “I think that having emergency rental assistance is going to help but there will nonetheless be a large increase in filings,” Hepburn said.

And Hepburn has found that because of the way the assistance is being allocated, more money will be available in small, rural states than in larger, urban states.

Black and Latino renters, particularly women, are disproportionately at risk of eviction and face more uncertainty as the moratorium expires.

“It was a series of omissions and mistakes that taken jointly result in a really inefficient and inequitable distribution of this money,” Hepburn said. “I don’t know that that was done with any sort of intent to disadvantage communities of color but I think it inevitably does.”

Geographically the evictions crisis will also be unevenly distributed.

In Wyoming, households can collect more than $5,167 in rental aid, while in New York’s expensive renter markets, households will have access to $766, according to his analysis.

In places like New York, however, there will still be some protections for renters even after the moratorium expires. In states like Florida and Texas, available rental assistance for households will be low and renters will have no protections.

And without those protections, they will be returning to a system that works in favor of landlords.

In Florida, for instance, people facing eviction for non-payment of rent must pay the money they owe into a court registry within five days of the landlord filing the eviction. If they don’t, the landlord automatically wins. If they do find the money, and therefore can cover the owed rent, they still aren’t guaranteed to win their case and could still lose their homes.

Natalie Maxwell, director of advocacy and litigation at Three Rivers Legal Services, said after the moratorium expires, she expects landlords will go to court to file for these default judgments while renters waiting for rental assistance will be evicted.

Maxwell said: “Our big concern right now is: is that money going to come by June 30?”