Millions Now At Risk From Oil And Gas-Related Earthquakes

Above Photo: Damage from an earthquake is seen at an Oklahoma home, where earthquakes have been linked to the injection of fracking wastewater underground. Millions of people in central and eastern U.S. are now at risk of damage from man-made earthquakes caused by oil and gas activities. Credit: Pat Carter/Getty Images

A new earthquake hazard map for the central and eastern United States shows about 3.5 million people, primarily in Oklahoma and southern Kansas, are at high risk of experiencing a damaging man-made earthquake from oil and gas-related activities this year.

Researchers at the United States Geological Survey have produced a one-year seismic outlook that takes into account both natural and human-caused earthquakes, mainly those generated by the underground disposal of oil and gas wastewater and, to a lesser extent, by fracking itself.

In recent years, there has been a surge in quakes linked to oil and gas activity, including a massive 5.8 event last September in Pawnee, Okla. Some have caused damage to homes, buildings and roads across Oklahoma and elsewhere, sparking public concern and prompting regulators to begin restricting local energy company activities.

Despite some pockets of the country remaining on high alert for damaging shaking, the scientists did find the region’s overall risk went down compared to last year, which was the first year of the seismic report. The 2016 forecast had indicated up to 7 million people had a chance of facing damage from a moderate man-made earthquake. The 2017 forecast was lower because the total number of earthquakes were lower in the study area in 2016 compared with 2015.

The scientists said the drop in earthquakes last year suggests man-made earthquakes can be controlled by reducing the fracking and/or wastewater disposal activity.

According to Mark Petersen, one of the leading USGS scientists involved in the project, the decrease was largely due to state regulatory actions starting in 2014 to restrict waste disposal and energy extraction in known potential earthquake zones. He also said it could have stemmed from companies reducing oil production and waste generation because of last year’s low oil prices.

“These reductions in earthquake rates indicate that this type of seismicity is manageable or controllable,” Petersen said a press conference announcing the 2017 forecast.

The researchers used the record of historical earthquakes (including all the ones in 2016), as well as studies and modeling in developing their 2017 hazard map. It showed that a large section of central and northern Oklahoma, as well as southern Kansas, faces a greater than 1 percent chance of experiencing a moderate earthquake this year. Moreover, a sliver of central Oklahoma faces an at least 10 percent chance. This especially high-risk area was the origin of the state’s largest-ever earthquake, the one that struck near Pawnee. 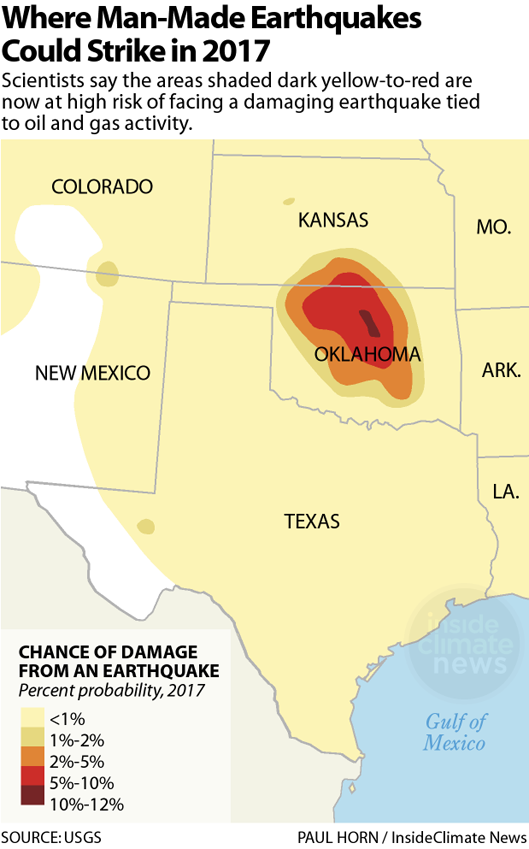 Overall the number of earthquakes in Oklahoma declined last year. However, the state was shaken by a record number of strong events in 2016. State regulators have increasingly put in place regulations to prevent man-made earthquakes, including rules announced in December on how drillers should respond to possible fracking-linked events.

According to a joint statement from state officials at the Oklahoma Corporation Commission and the Oklahoma Geological Survey, the USGS 2017 forecast “serves to confirm the validity of the work done in Oklahoma to reduce earthquake risk, as well as the need for the effort to continue.”

The new forecast also identified high risk in two other areas where oil and gas wastewater disposal takes place: a small area in northern Kansas, as well as an area called Raton Basin along the Colorado-New Mexico border, which experienced two earthquakes above magnitude 4.0 last year.

The researchers identified a new area of risk of man-made quakes, in western Texas, compared to last year. Meanwhile, the risk of damaging events in northern Texas largely disappeared compared to 2016. The USGS scientists said at the recent press conference that they did not know why this was the case and that Texas officials are studying the issue.

The threat of man-made earthquakes tied to oil and gas activities extends to states excluded from the forecast. For example, researchers have identified likely man-made earthquakes in multiple areas of oil and gas development in California. And state officials in Pennsylvania last month announced a series of four small earthquakes observed in April 2016 that they say was linked to a nearby fracking pad.