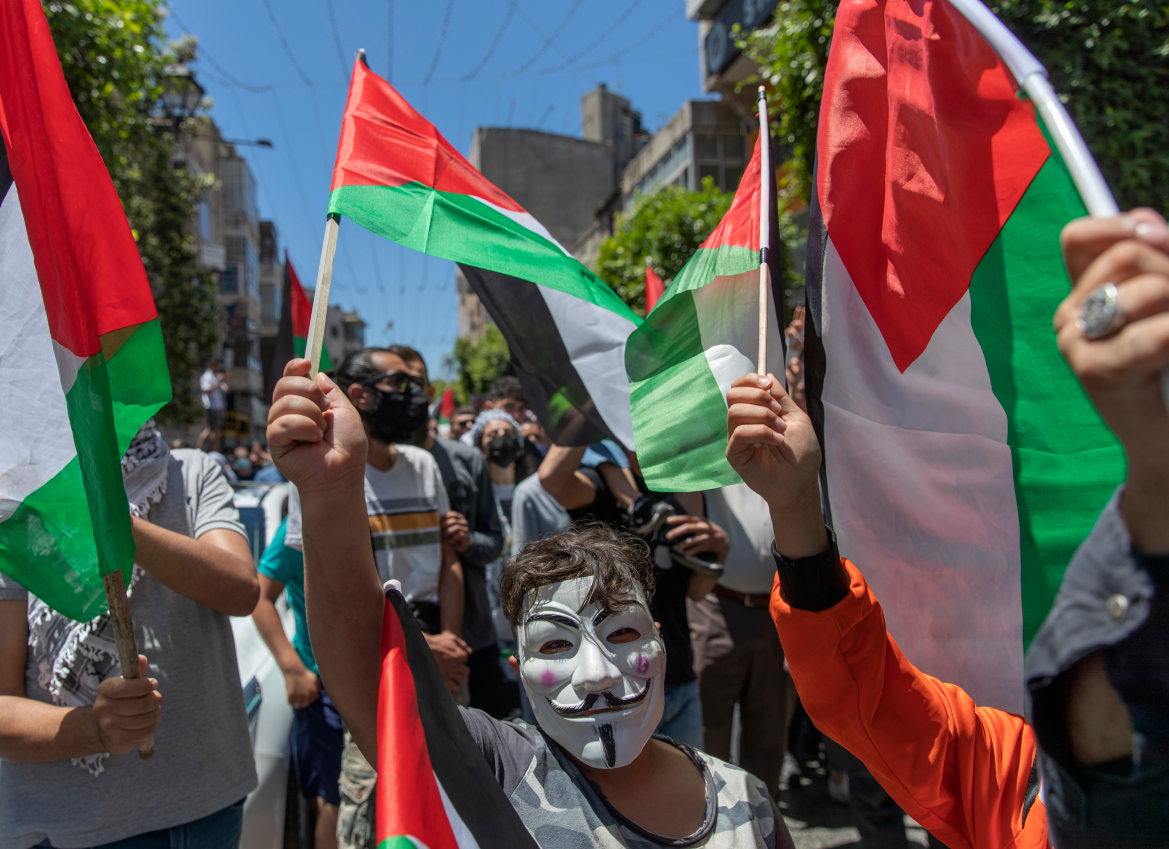 Above Photo: Protesters take part in a mobilization in Ramallah as part of the general strike across Jerusalem, the West Bank, and cities in Israel. AP Photo/Nasser Nasser.

In defiance of Israel’s most recent onslaught on Palestine, workers and activists across Palestine and even in cities in Israel joined in a general strike and day of action to protest Israel’s occupation.

Businesses across Jerusalem, the occupied West Bank, Gaza, and Palestinian communities inside Israel are shuttered as workers, young people, and activists take to the streets to demand an immediate end to the latest chapter in Israel’s recent offensive against Palestine. Israel’s airstrikes, coupled with police and military operations on the ground across the region, have resulted in the deaths of 212 people, with tens of thousands of people left without homes or access to basic necessities like electricity and water. The strike, organized on social media and led by young people and social and political organizations, is a resounding call for Karameh or “dignity” — it is an organized day of action to demand an end to Israeli occupation and apartheid in Palestine.

The cities of Ramallah and El-Bireh are fully respecting the #StrikeForPalestine.

The commitment for the strike has been stellar. The real measure of success will be the # of marches today.

While the strike has since gained the official support of both Fatah (the leading party of the Palestine Authority) and Hamas, it is important to note that it was called and organized from below, by rank-and-file workers and social organizations taking the lead in the resistance to both Israel’s attacks and the Palestinian Authority’s history of complicity with Israel’s continued occupation.

As activist and journalist Fadi Quran points out, the strike:

“Is a significant development for multiple reasons. It is breaking decades of political fragmentation where Palestinian actors in each subdivision (WB [West Bank], #Gaza, 48 areas), acted individually. The youth’s initiative to refuse to allow this fragmentation to continue, if it succeeds, further builds up unity not seen in decades. Whereas the last month’s developments mainly included young people, this allows a broader swath of society to engage. This is key at this moment, expanding agency to meet demographics. The PA [Palestinian Authority] and Arab party leaders in Israel are working, quietly, to go back to oppressive status quo where they control the street. This, if it succeeds, turns those plans on its heads.”

Bethlehem is shut down for the strike! Palestinians across all occupied Palestine are on a general strike today in protests of Israeli apartheid, violent military occupation, & ethnic cleansing of Palestinians. #PalestineStrike #SaveSheikhJarrah #GazaUnderAttack pic.twitter.com/PFHYyTzjcR

A wide sector of workers organizations have taken the streets today, from teachers and transport workers unions to lawyers unions and healthcare workers.

The city of Jerusalem has been paralyzed by the strike, with businesses closed and city streets empty as workers joined other protesters in central squares to protest against Israel’s attacks. Similar scenes could be seen across the region, including in the city of Ramallah, where the strike brought thousands of people into the streets — these are the largest demonstrations in the city in many years.

Palestinian workers at a picket line today in Ramallah taking part in the ongoing general strike against Israeli violence and apartheid #PalestineStrike pic.twitter.com/IsDeeX8fyt

The scene in Ramallah, in the occupied West Bank, today: pic.twitter.com/amxMw9BH62

Many of the workers on strike today reside in so-called “mixed” cities within Israel, such as Jaffa and Haifa, which have seen massive protests against the airstrikes, evictions, and repression in Gaza and across the region in the last two weeks. The workers in these cities, who are subject to Israeli law and members of Israeli unions, joined the strike amidst threats of firing and retaliation from the bosses.

The strike included large demonstrations across the country, with hundreds of thousands of Palestinians joining workers in the streets. In the West Bank and Israeli cities, these protests — many of them called at Israeli checkpoints — have been met with severe repression by the police. In al-Bireh in the occupied West Bank, a Palestinian protester was killed by Israeli forces repressing the mobilizations at the nearby Beit El checkpoint. At least 50 other protesters were shot with live ammunition and have been taken to hospitals for their injuries.