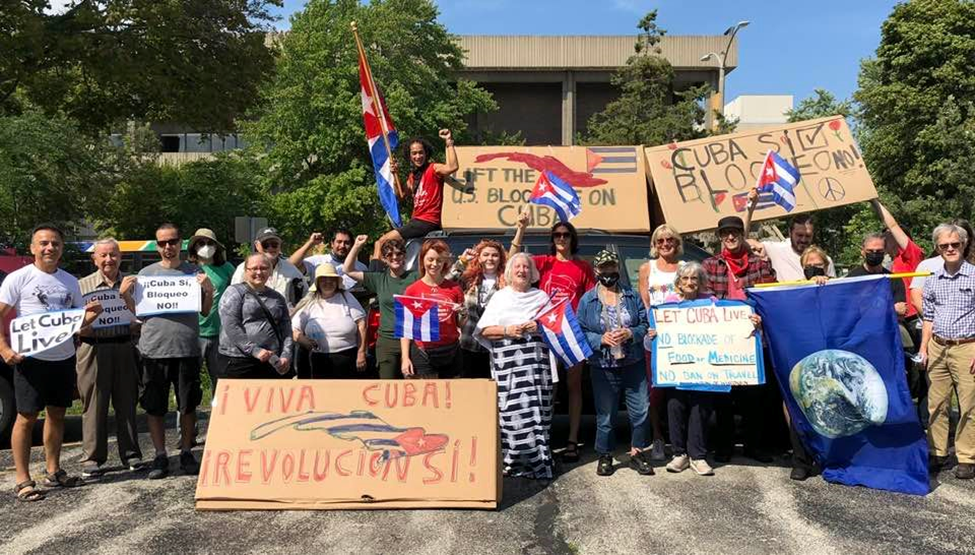 Milwaukee Cuba Caravan Highlights The Damage Caused By The US Blockade

And The Tragic Fire In Matanzas.

Thirty Cuba solidarity activists heard updates, Sunday, August 28, on how the people of the island are adapting to the ongoing impacts of the US economic blockade and the recent fire at an oil depot in Matanzas, fifty miles from Havana.  Three members of the Party for Socialism and Liberation gave report backs from a recent visit to the island, which included the delivery of humanitarian assistance, part of the Hatuey Project.  The updates preceded a car caravan, one of many around the country, demanding an end to the US blockade of Cuba.

Sam Doucas, Erica Steib, and Alexa ‘Lex’ Nutile spoke about Cuba’s justified reputation for providing health care for all of its citizens. They pointed out that Cuba’s infant mortality rate is less than that of the more developed United States. However, because of the 62-year US economic blockade, the Cuban health care system is short of vital medicines and diagnostics and surgical equipment to facilitate health on the island. To help support Cubans’ health, the three PSL members joined with others in the Hatuey Project to bring medical supplies to support maternal care on the island.

Also, the speakers reported that despite the severity of the economic blockade, the United States in the Trump period adding 240 additional restrictions on international commerce with Cuba, the Cuban people still support their government and health and welfare programs. Since Trump left office, the Biden administration has not honored its campaign promise to reverse the new restrictions and thus reduce their horrific effects on the Cuban people. US policy remains to isolate and starve the Cuban people until they surrender and overthrow their government.

Art Heitzer, a founder of the Wisconsin Coalition for the Normalization of Relations With Cuba (wicuba.org), pointed out that the lightning that struck the massive oil depots in the city of Matanzas on August 5 has made access to energy resources on the island even more scarce. The United States, he said, had already been interfering with Cuban oil imports, such as from other US sanctioned countries (Venezuela, Iran, and Russia) from shipping vital oil resources in the open seas. And while several nations, including Mexico and Venezuela promptly sent firefighters and material aid to Cuba after the fire began, the only response from the United States to the island’s biggest fire ever, was to offer a half hour phone conversation to provide “expert information to deal with the fire.”

(At a recent local event the Party for Socialism and Liberation raised $5,405 for the Hatuey Project to support the victims of the Matanzas fire. To donate, please go to https://www.hatueyproject.org/donate/)

The speakers encouraged US citizens concerned about Cuba’s economic difficulties, including citizens with relatives on the island, to demand an end to the cruel and inhumane economic blockade of the island. Even a return to the modest opening of US relations toward Cuba in the Obama years would allow for improvements in health care, the growth of small businesses, housing renovations, and the resumption of Cuba’s vibrant tourist industry. The Cuban people, the speakers noted, appreciate the solidarity that so many in the US show to their revolution.

The informative and spirited talks, in front of the Zao MKE Church, were followed by a 16-car caravan ride around Milwaukee’s northside, including the campus of the University of Wisconsin at Milwaukee to educate people on the streets about the pain and suffering caused by the blockade. Speakers also urged those concerned about the US policy to starve the Cuban people to join the Wisconsin Coalition to Normalize Relations With Cuba.