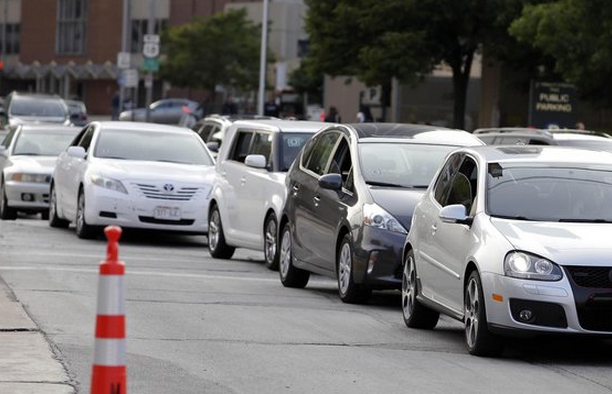 Photo: Rick Wood A stead stream of Uber cars dropped fans off at Summerfest Wednesday, on day 1 of a three-day strike by county bus drivers.

Milwaukee, WI – Amalgamated Transit Union (ATU) Local 998 started a 72-hour work stoppage this morning, July 1, at 3:00 a.m. It will go through 3:00 a.m. Saturday morning, July 4. The work stoppage comes during the middle of Summerfest, billed as the largest annual music festival in the world. An average of 800,000 to 1 million people attend over 11 days, with an estimated 15 to 20% of festival-goers taking public transportation.

ATU president James Macon made clear that the company and the county government are to blame for the work stoppage, as they refused to provide a fair contract offer to the workers.

“We have tried over and over again with the company to get something done but they kept putting it off and making excuses,” Macon said at a press conference in front of the ATU hall June 30. “This is County Executive Abele, not the county board, but Abele that is controlling [Milwaukee County Transit System] MCTS. There is no way in the world that this union or anyone should expect us to bring close to 300 part-time drivers with no benefits that won’t pay into the pension. What is going to happen, if that ever happens, is the county will have to pick up our pension when it goes bankrupt and I don’t think anyone would like that.”

Drivers are demanding a contract that allows adequate time allowed for bathroom breaks; workplace safety; and they are against the introduction of nearly 300 part time drivers. 93% of membership disapproved of the proposed four-year contract and 92% voted to authorize a strike. ATU 998 represents over 1000 active members.

In typical fashion, the company, reactionaries and the county are trying their best to blame workers for the work stoppage, suddenly showing concern for people who rely on public transit. This comes after years of support to slashing funding to the service that has over 50 routes and provides 150,000 passenger rides a day.

“The narrative that is being pushed by the county executive and his minions is false. Transit workers are asking for the same things that all workers deserve and have stood up with workers demanding respect on the job from other professions. They’ve asked for the public to amplify the need for funding and safety for the system, and were largely unheard. I am sorry that it took a work stoppage to finally get folks here to listen, but it is what it is,” Walker continued.

The union has strong community support and solidarity from other unions, with a picket line that began at 3:00 a.m. organized in coordination with the Milwaukee Teachers Education Association (MTEA) this morning. Another rally is set for tonight at 8:00 p.m., organized in coordination with a group of young rank-and-file workers and supporters who are active through the “Defeat Right to Work in Wisconsin” Facebook page. ATU has called for another action July 2 at 5:00 p.m. at the County Courthouse.

No cuts to transit, no attacks on workers, a fair contract, and bathroom breaks for drivers!