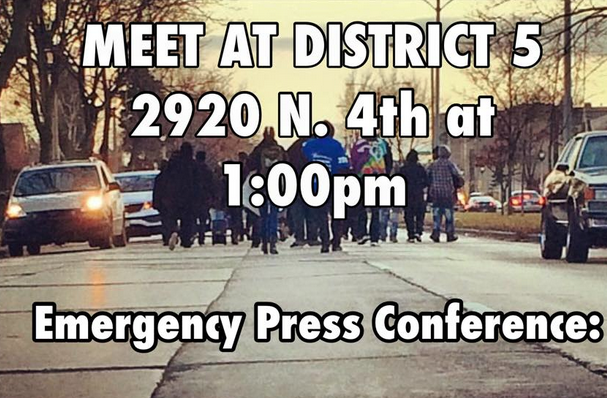 For three years now dating back to the in custody death of Derek Williams, I have been a vocal activist for the group Occupy the Hood Milwaukee. Within these three years we have faced four very influential cases of injustice; Darius Simmons, Derek Williams, Corey Stingley, and now a national case with Dontre Hamilton.

Just recently, I have been arrested three times for civil disobedience, have been personally called out by our chief of police and now am wanted (without a warrant issued) for ‘interrogation and desire to charge’ by Milwaukee Police Department. They have searched for me for two days now using the Fugitive and Apprehension Division.

Since December 26, after our rally on 27th & Burleigh, targets were identified for arrest. On December 29th, we will be releasing information to the public regarding these “temporary warrants” issued. Our goal is to develop a community where we can police ourselves, correct ourselves, and have a community response team in place throughout identified neighborhoods.

We believe that these are intimidating and harassment tactics by MPD to isolate protesters and die down the movement. We stand against community repression, suppression and oppression. Milwaukee has been unjust for years and years, and we must bring a spotlight to this crisis of police violence.

This is breaking information and very few details are known at the moment. On December 22nd 2014 Milwaukee District Attorney John Chisholm announced that the Killer Cop Chris Manney would not face charges for shooting Dontre Hamilton 14 times at Red Arrow Park. Protest have been ongoing and have escalated since this announcement. There have been close to 100 total arrest made in the last few weeks and it seems apparent that more arrest can be expected. As of now at least a dozen people have had to be bailed out of the Milwaukee County Jail. You can help continue to keep our friends and family out of jail by donating To this Bail Fund Link.

The Star Bucks at Red Arrow Park that called the police twice on Dontre before he was killed.