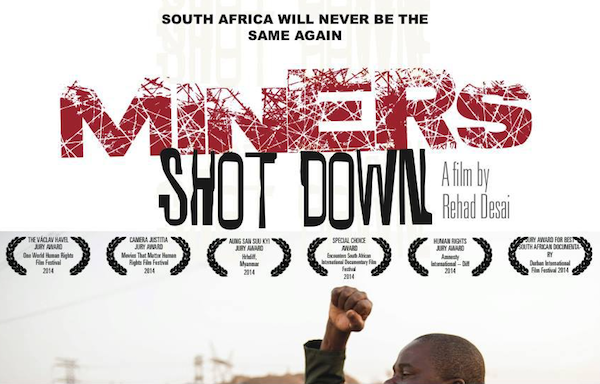 Miners Shot Down: Blood On Whose Hands?

Photo courtesy of Uhuru Productions “Repeatedly shot as they tried to surrender,” says Greg Marinovich. “Not just once. Coming up − two, three times with their hands in the air − shot repeatedly.”

Marinovich is a photojournalist who closely covered the so-called Marikana massacre of August 2012 in which 34 striking mine workers were shot dead by police. According to him, the police’s story of acting in innocent self-defence is a lie. “They went and carried on hunting down people, for twenty minutes.” Interviewed by Rehad Desai in his new documentary, Miners Shot Down, Marinovich’s words form part of a forensic case built up over the course of the film that forcefully indicts the police, the government and the Lonmin mining company for their respective roles in the most deadly display of state violence witnessed in post-apartheid South Africa. It may have been rank-and-file police officers pulling the triggers, but, Desai’s film concludes, it is those at the top – “those who pulled the strings” – who bear greatest responsibility.

“Heads need to roll at a very high level,” argues Ronnie Kasrils, a former minister for the ruling African National Congress (ANC) and outspoken critic of President Jacob Zuma’s government. To date, not one policeman has been charged for what took place at Marikana, victims have been both blamed and put on trial, and suspicions of a cover-up stubbornly linger. Miners Shot Down – drawing upon evidence presented to the Commission of Inquiry, which is still ongoing, and some original material – interrogates the lines of communication descending from the government down to the foot soldiers, suggesting professional failings of incompetence and corruption. Who ordered the use of live ammunition? What was the nature of the relationship between the police and Lonmin, and between Lonmin and the ANC? Why has no police office or government minister been held accountable, whereas 270 of the miners faced common purpose murder charges (until they were belatedly dropped last month)?

These are the questions that ought to detain the official inquiry, though Desai is sceptical of the integrity of the process and doubtful it will produce satisfactory results. But the film goes further, situating the events of Marikina within a context wider than that of police or government corruption. As Desai reflects in the film’s opening scenes, Marikana can be placed along a historical road leading from Sharpesville in 1960 via Soweto in 1976: a mass killing uncomfortably redolent of the massacres of apartheid, reminding citizens of the new South Africa that the arrival of formal democracy has not brought about the full dismantling of the apartheid state. Rather, Mariknana was a thoroughly familiar event: as Charlayne Hunter-Gault wrote in the New Yorker at the time: “The bloody episode in this eighteen-year-old black-majority democracy takes many back to the days of white-minority rule, when policemen routinely fired on and killed thousands of South Africans fighting for their freedom.”

The real meaning of Marikana, Jerome Roos argued, is that it showed how “the violence of the state simply reasserted itself anew under the ANC.”

As Miners Shot Down tells it, Marikana was a pre-eminently South African tragedy. It demonstrated how the legacy of apartheid – particularly the centuries-old collusion between foreign capital and government violence − continues to undergird the character of the new South African state. Furthermore, it offered a graphic illustration of the extent to which the once radical leaders of the ANC and their allies, the trade unions, have been co-opted by the country’s established capitalist elites. It is for this reason that Desai’s interviews with Cyril Ramaphosa stand out as some of the film’s most unsettling and memorable scenes. In the 1980s and 1990s, Ramaphosa was renowned for being a hero of the trade unions movement, an apartheid-fighting ANC grandee, and Nelson Mandela’s favoured successor.

But by 2012, he was perhaps better known for having amassed vast personal wealth through his business interests and, at the time of Marikana, was a board member of Lonmin. Despite the controversy over his role in the massacre, he shortly later rose to the position of Deputy President of the ANC, though his recent appearance at the Marikana Inquiry was momentarily held up as victims’ families chanted “blood on his hands.” Delivered in a silky, feline manner, the former anti-apartheid hero’s trite bromides and frustrating doublespeak in the documentary powerfully encapsulate the pedestrian present of Zuma’s ANC: “We always have strikes, because we have such a robust democratic system that allows workers to express themselves”, he opines. “And people should never be alarmed: this is the South African way.” As Desai notes at the film’s close, Ramaphosa’s business interests have helped him amass a personal fortune of $700 million – which perhaps suggests that the persistent dominance of a corrupt alliance between business and government is an altogether closer approximate of the “South African way.”

That Marikana was a product of South Africa’s particular history is true in other important senses, although Desai’s film does not quite touch upon them. One of the enduring characteristics of the South African economy is its migrant labour system. The centrality of this system to the Lonmin mine is a crucial part of the Marikina story, since the majority of mineworkers in Marikana are from the Eastern Cape, Lesotho and Mozambique. Desai’s film, while highlighting the problem of low wages and poor working conditions as the primary cause of the strike, sidelines the equally important point that low wages and poor working conditions have always characterised the mining industry in South Africa. By cutting men off from their families, the system enabled mining companies to pay poverty-level wages and provide single-sex compound housing while their families back home in the ‘Tribal Homelands’ (‘labour reserves’) struggled to subsist.

In order to bring out this aspect of miner’s struggle, the film could perhaps have benefitted from closer engagement with the miners themselves. The near total absence of miners’ families from the film is indicative of the fact that these miners are almost entirely isolated from their communities for most of the year, living the lives of migrant labourers not much changed from those endured by their forebears under apartheid. It would have enriched the film as an emotional document and strengthened its explanatory power if individual miners had more of a voice. Intimate portraits of these men would have added depth to what at times feels like a superficial treatment of the subject. More generally, the film also lacks a satisfactorily wide-ranging cast of interview subjects: there are few representatives of the government, or of Lonmin, and Desai says that no rank-and-file members of the police force agreed to speak on camera.

Yet in spite of this, Miners Shot Down is a powerful film, combining moral outrage with forceful reportage. The final scenes in particular – containing shocking video footage of miners being mowed down by alarmingly militarised police officers – are deeply troubling. The documentary also has the potential to influence the ongoing inquiry. Desai is himself optimistic in this respect. As he told Think Africa Press: “I am hoping the commission will feel the pressure generated partly by the film to recommend the police are prosecuted. Justice cannot be served until this happens, and I will not rest until it does.’