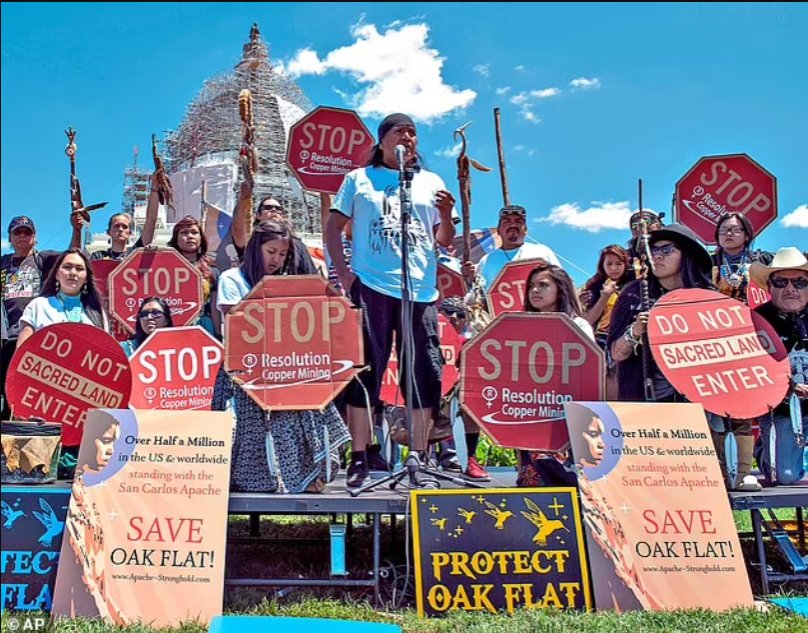 Above Photo: Clash: Wendsler Nosie of the Apache Stronghold is fighting Rio Tinto and BHP.

The serene Oak Flat upland lies in the heart of Arizona. With its beautiful peaks and forest, it is a beloved spot for campers, hikers and rock climbers.

Above all, it is the center of the San Carlos Apache tribe’s religion, a place of devotion where their gods dwell and they still perform traditional ceremonies.

But it is now at the center of a dispute between the tribe and FTSE 100 giant Rio Tinto. It is also shaping up to be an acid test of the mining group’s claims that it is determined to respect sacred sites.

Wendsler Nosie Sr of the Apache Stronghold – a coalition of Apaches and non-Apache supporters that is bringing the case – describes it as the ‘most sacred site where we connect with our creator, our faith, our families and our land’.

He says: ‘It is a place of healing that has been sacred to us since long before Europeans arrived on this continent.’

Members of the tribe, which was famously guided by Geronimo in the 19th Century, have referred to it as their equivalent to Mount Sinai and describe rock paintings and carvings as the footprints and spirit of their ancestors.

In 1955 President Eisenhower signed an order declaring Oak Flat, which is in the Tonto National Forest 60 miles from state capital Phoenix, off-limits for mining.

But since 2004 there has been a bitter struggle by Rio Tinto and fellow mining group BHP – through their Resolution Copper joint venture – to access the metal lying under Oak Flat, in opposition to locals.

The project is now set to be at the center of a Supreme Court battle that threatens to tarnish Rio’s already damaged reputation.

The company was the target of global outrage after it blew up two 46,000-year-old sacred Aboriginal caves in Western Australia two years ago to expand a lucrative iron ore mine, despite knowing their archaeological and religious value.

The destruction resulted in an Australian parliamentary inquiry, a re-evaluation of heritage laws and a boardroom clearout – which included then-chief executive Jean-Sebastien Jacques.

Chairman Simon Thompson promised that the company would ‘never again’ destroy sacred sites, and new boss Jakob Stausholm has made a point of investigating toxic culture and practices.

But the plight of the Apache tribe seems in direct contradiction to these aims.

Resolution Copper, by its own admission, says the type of mining it plans to use could result in an almost two-mile-wide crater in Oak Flat, destroying the land.

Roger Featherstone, director of campaign group the Arizona Mining Reform Coalition, says: ‘One cannot forget Rio Tinto and BHP both promised the world they would never again allow the destruction of an indigenous sacred place after Rio Tinto blew up sacred rock shelters in Australia for a mine expansion – the Resolution Copper mining plan would do exactly that.’

Locals also insist the huge amount of waste created and water required for the project could imperil the state’s resources.

Featherstone adds: ‘With Arizona in the middle of the worst drought we’ve faced in 1,200 years, there is not enough water for this project unless farmers, communities, our public lands, and other industry give up water to allow it.’

Resolution Copper’s attempt to get hold of the land has involved a complicated legal process – hinging on a land swap with the National Forestry Service. That was waived through in January 2021 under the Trump administration.

The Apache tribe immediately filed an injunction to halt the project altogether on the grounds that it would harm their religious freedom. In June, a federal court rejected this injunction in a 2-1 ruling – with the dissenting judge Marsha Berzon calling the conclusion ‘absurd’.

However, the controversial land swap is on pause and still the subject of a federal investigation. Meanwhile, the Supreme Court appeal, expected to be lodged next month, will again make the case that the Apaches’ religious freedom will be crushed by the mining plans. The case is between the Apache Stronghold and the US government – but Rio could be called in as a witness. Luke Goodrich, vice president and senior counsel at the Apaches’ legal group Becket Law, said: ‘In law, principle and common sense this is one of the most straightforward cases I’ve ever worked on.

‘Legally, for the Apaches themselves, this is a matter of life and death, it is about whether their tribe as a people could continue to exist for centuries.’

A Rio spokesman said the company has already scaled back its plans and excluded some sensitive areas. Rio added: ‘We respect the sovereignty of tribal communities. Resolution Copper is committed to preserving Native American cultural heritage while developing partnerships and bringing lasting benefits to our communities.’