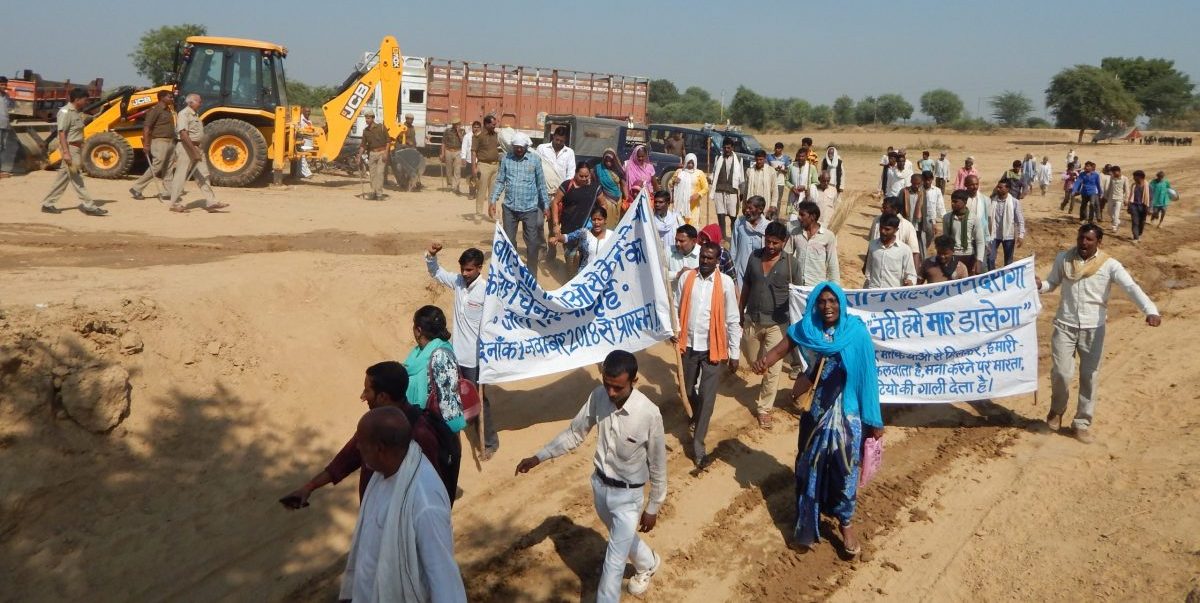 Above photo: A protest in Bundelkhand against river-bed mining.

In Kolawalpur village of Banda District (state of Uttar Pradesh), many farmers complained bitterly that the miners of river sand had destroyed their farms and standing crops. What is more, threat of floods in the rainy season and the river drying up in the dry season had increased due to the excessive extraction of sand from the river using heavy machines. Workers who were employed in sand mining had not been paid the wages due to them.

In Mahawa and Bhirala villages of Sikar district (state of Rajasthan) the farmers and pastorals had been devastated by mining of stone and the use of dynamite for this. Water sources were drying up. Not just workers but even other villagers had fallen prey to stone dust related health problems including silicosis disease. After blasting work, stones were hurled here and there and could hurt anyone.

These are just two examples of how indiscriminate mining of construction materials including river-sand and various kinds of stones (as well as stone crushers attached to them) has caused havoc in tens of thousands of villages in India in recent years. Much of this is illegal mining. This illegality takes broadly two forms. In the first category mining lease is legal but mining is carried out much in excess of the permitted limit. In addition environmental and labor laws are widely flouted. In the second category the entire mining activity is carried out illegally.

Hence as much of the mining involves illegality, criminals and gangsters have come to the fore, earning millions in a short time and securing the collusion of politicians and police as well. When police officers have made sincere officers to stop them, even they are not spared, as happened recently when a senior police officer Surendra Singh was mowed down by a stone carrying dumper, sending shock waves far and wide.

This was by no means the first attack on a police official by the mining mafias, testifying to their arrogance and power. Attacks on social activists are even more frequent. In Sikar, for example, the villagers told me about Pradeep Sharma, an activist from a very respected family of freedom fighters, who was opposing the mining mafia and was murdered by them. The leading activist here, Kailash Meena, broke down while telling the tragic details of his friend’s death and injuries his other colleagues have suffered. He himself too has received many threats and has been attacked too.

Several environmental activists have warned that excessive sand mining from villages can cause very grave harm to many rivers and their smaller tributaries at a time when extreme water scarcity is already a big problem across vast areas. The miners bring in very heavy machinery right up to the riverbed. Then a temporary bund is created and sand much in excess of the safe limit is extracted. This excessive extraction, movements of big machinery and temporary bunds all cause much harm to fish and other aquatic life. During the rainy season the river and its banks cannot absorb adequate excess water so that during the dry season the river flow is reduced to a trickle, or it may go entirely dry. On the other hand the reduced capacity to absorb more water during the rainy season makes the river more prone to floods as well. As very heavy machines are taken to the river and as trucks loaded with sand are driven past the village day and night from river, the farms, pastures and paths of villages located near rivers often suffer grave harm.

At the same time, some environmental harm is at a much wider level. For example in north-west India several of the hills preventing spread of desertification have been devastated and flattened by excessive mining.

Several groups have been trying to prevent this destruction. In a rare success story, women in Kolawalpur stood in the river to say prayers for protecting the river. This sight so moved many people that they joined hands together for a big protest demonstration. Finally the local administration had to accept some of their demands to reduce mining-related harm. However in most cases the activists protesting against excessive and illegal mining have faced repression and victimization.

Many workers employed in this mining work are exposed to high levels of health hazards and accident risks. Till some time back consciousness regarding silicosis disease was very low, even though it was known to be widely prevalent among stone mine workers. Following a helpful judgment of the Supreme Court of India, social activists in some parts of the country, particularly in Rajasthan, have been able to take compensatory payments to some workers or their family members. On the whole, however, conditions of workers including women workers continue to be highly precarious.

Over the years several environmental groups and labor organizations have tried to raise their voice against mining mafias. Several legal actions have also been initiated in courts and some good judgments and directives based on these have been issued by the courts. Unfortunately, despite this, the problems relating to illegal and excessive mining of construction materials have continued to become more serious. It is the behind the scenes involvement of powerful politicians which is responsible for the continuing capability of the mining mafias to go on with their activities more or less unhindered despite all the efforts to restrict and check them. The rural groups struggling in remote villages to protect their people from the ravages of indiscriminate mining often work in isolation from each other and hence cannot become a strong enough voice to change policy and/or improve implementation in a significant way. Nevertheless their continuing efforts over the years have helped to increase public consciousness regarding the harm and threats from mining mafias. The time has now come for more unity and better coordination of these various scattered actions to achieve more important results.

Bharat Dogra is Honorary Convener, Campaign to Save Earth Now. His recent books include A Day in 2071, Planet in Peril and Man over Machine.