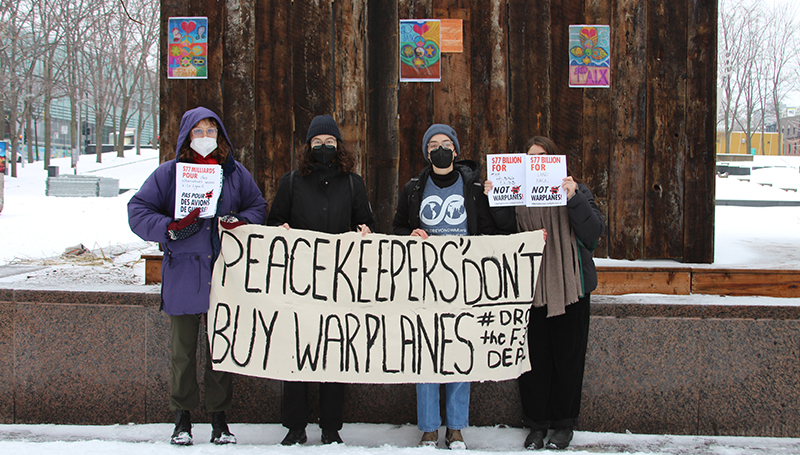 There Is No Canadian ‘Climate Leadership’ Without Canceling The F-35

On Friday January 6th 2023 people gathered in front of Minister of the Environment Steven Guilbeault’s office to speak out against the F-35 deal that was announced by the Canadian government. Although it may have been unclear why we were protesting at Guilbeault’s office for a peace protest, there were many reasons for us to be there. As a climate justice activist fighting against fossil fuel infrastructure, such as Enbridge’s Line 5, an aging, deteriorating, illegal, and unnecessary pipeline passing through the Great Lakes and that was ordered to shut down in 2020 by Michigan’s Governor Whitmer, I wanted to highlight some of the connections between anti-war and climate justice activism.

Further, both the purchase of these fighter jets and the Canadian government’s defiance of the first ever shutdown order of a pipeline are limiting any advancement of Indigenous sovereignty. In fact, the Canadian government has a known history of using Indigenous lands as military training grounds and weapon testing areas, adding to the other forms of colonial violence it inflicts on Indigenous people. For decades, the Innu of Labrador and the Dene and Cree peoples of Alberta and Saskatchewan have been at the forefront of protests against air force bases and fighter jet training by constructing peace camps and engaging in nonviolent campaigns. These fighter jets will also most likely have disproportionate harm on Indigenous communities through things such as arctic surveillance and by preventing long-due investment in housing and healthcare in Indigenous communities in the North.

In the realm of climate justice, Indigenous people across Turtle Island and beyond have been at the forefront of the movement and have been disproportionately impacted by the harmful fossil fuel (and other) industries. For instance, all 12 federally-recognized tribes in Michigan and the Anishinabek nation (which comprises 39 First Nations in so-called Ontario) have spoken out and protested against Line 5. This pipeline is illegally trespassing on the Bad River Band Tribe’s reserve. This tribe is currently in a court case against Enbridge and several Indigenous-led movements have protested the continued operation of Line 5 for years.

Although Guilbeault may have different views than those of other Liberal government politicians on climate change and war, he is still complicit in this perpetual violence and in maintaining the status quo. As the minister of the environment, it is unacceptable for him to approve projects such as Line 5 and Equinor’s Bay du Nord (a new offshore drilling megaproject off the coast of Newfoundland) and to not stand up against this fighter jets deal. Although he may be hesitant to support these projects, as interviews have suggested, he is still approving them… His complicity is violence. We need someone who is going to stand up for what they believe in and who will actually serve the greater good through things such as affordable housing, healthcare, and climate action.

When we look at how the government uses its money, it becomes even clearer that Canada is supporting war and is not supporting meaningful climate action despite the reputation it tries so hard to uphold as peacekeepers and climate leaders. The government is advertising the cost of this deal as between $7 and $19 billion; however, that is only the cost of the initial buy-in for 16 F-35’s and does not include the lifetime cycle costs which include costs pertaining to development, operation, and disposal. The actual cost of this deal is therefore likely much higher. In comparison, at COP 27 last November (which PM Trudeau did not attend), Canada pledged to support “developing” nations (an incredibly problematic term in itself) to mitigate and adapt to climate change through initiatives that amounted to $84.25 million. In total, there is $5.3 billion in the climate financing commitment envelope, which is significantly less than what the government is spending on this single fleet of fighter jets.

Here, I have just highlighted some ways in which militarism and climate change are tied and the ways in which our Members of Parliament are exemplifying this hypocritical approach in which their words and actions don’t match. We therefore gathered at Guilbeault’s office – which was highly “protected” by incredibly defensive and aggressive security guards –  to protest the Canadian government’s lack of active engagement in the just transition and to hold them accountable in serving the public good. Trudeau’s government is using our tax dollars to exacerbate violence in the world and we will do everything in our power to stop this unacceptable behaviour. People are suffering; the Canadian government must stop using empty words and PR campaigns to absolve themselves from the harm they are inflicting on the entirety of the population (and particularly on Indigenous peoples) and the environment. We are calling on the government to engage in climate action, in true acts of reconciliation with Indigenous communities across Turtle Island, and in improving public services.