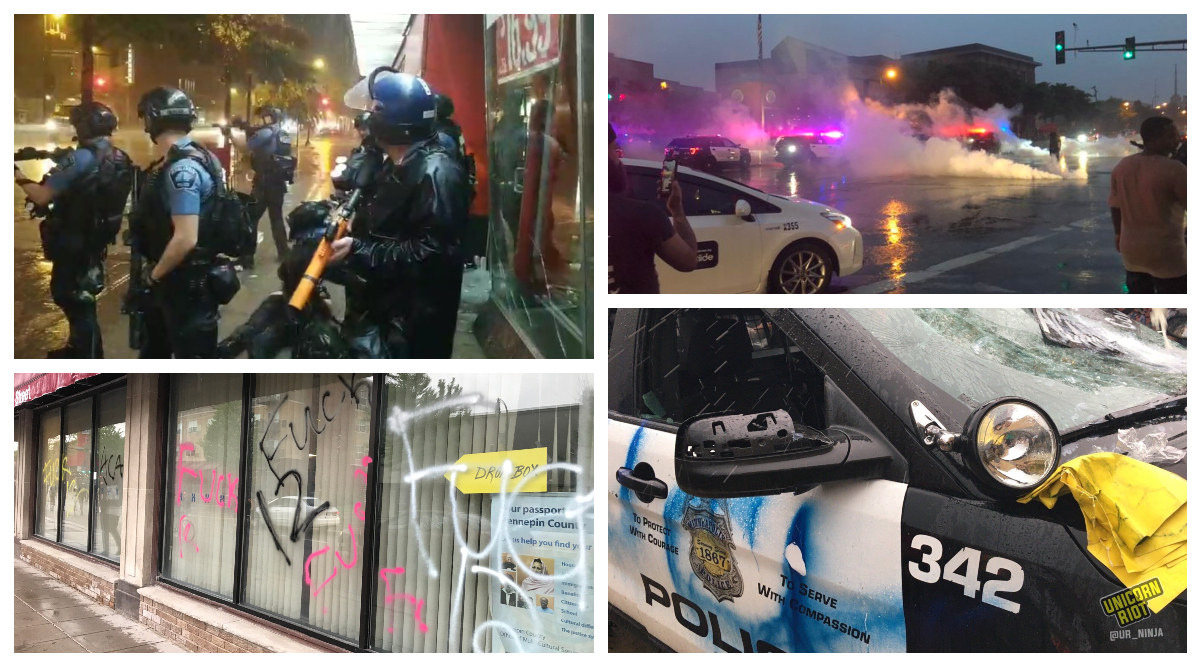 Minneapolis Explodes Against The Police

Above photo: Collage by Unicorn Riot.

The streets of Minneapolis exploded on Tuesday evening, following the horrific murder of a 46 year-old African-American man, George Floyd, at the hands of white police officers on Monday. In a now viral video, Floyd’s grizzly murder was captured on film, as a white police officer held his knee on Floyd’s neck while he lie on the ground for several minutes, as an angry crowd gathered and recorded the killing. In the video, Floyd can be heard saying that he was not able to breathe, echoing the words last spoken by Eric Garner, who was also killed by police in 2014 in a similar incident in New York.

“The more the social order loses credit, the more it arms its police.” – The Invisible Committee pic.twitter.com/RcfBXnVycJ

Overnight, video of the attempted arrest circulated on social media. Posted by Darnella Frazier on Facebook, the nine-minute video shows a white officer pressing his knee into Floyd’s neck behind a squad car. While lying facedown on the road, Floyd repeatedly groans and says he can’t breathe.

“He’s not even resisting arrest right now, bro,” one bystander tells the white officer and his partner, in the video. “You’re f—ing stopping his breathing right now, you think that’s cool?”

After about five minutes, Floyd stops moving and appears unconscious. People in the gathering crowd plead for the officers to check Floyd’s pulse. The officer on Floyd’s neck does not lift his knee until medical personnel arrive and carry him to an ambulance.

Directly following the video of Floyd’s murder going viral, all four of the officers that were involved in the killing were fired, a rarity in cases involving police deadly use of force. According to Mapping Police Violence, police are charged with a crime following deadly encounters only 1.7% of the time. Multiple media outlets also reported that the FBI is also investigating the killing “for possible civil-rights violations.”

Despite expected heavy rains and the firing of the four officers, the demonstration on Tuesday evening brought out thousands of people onto the streets; the vast majority of them wearing masks to prevent the spread of the coronavirus. Arial shots of the demonstration show it stretching across several city blocks. After first marching to the site of Floyd’s murder, the crowd kept the protest moving and marched on the 3rd police precinct, located in a highly residential and commercial area. After surrounding the building, the front window of the precinct was busted out and people began to write slogans on police cars and building walls, while others pelted the remaining windows with eggs and other projectiles. People then began attempting to break out more windows before being repelled by police tear gas from officers inside the building.

A glimpse of some of the graffiti that just went up on the Minneapolis Police 3rd Precinct: pic.twitter.com/HqDedIUYJR

During this chaos, various “peace police” attempted to contain the crowd, trying to get them to stop attacking police property, yet these cries fell almost completely on deaf ears. A large group of police wearing gas masks then were successful in pushing the crowd away from the building, and also towards the police parking lot, where people began to tear open fences to vandalize and attack a variety of police vehicles; breaking out windows, mirrors, popping tires and spray painting slogans.

It would be impossible to detail a full account of what has gone down in Minneapolis today. Thousands of people held space for grieving the loss of #GeorgeFloyd, and affirming that we will never again let the police take another life. pic.twitter.com/vo1A8zlSaw

Enraged, police then began shooting massive amounts of projectile weapons and tear-gas into the parking lot, pushing people onto the adjacent street, and away from their vehicles. Unicorn Riot reported on the ground that these tear-gas canisters led to a series of small fires, which were quickly put out by demonstrators, who also threw the tear gas back towards the police. Officers also shot off large amounts of “marker rounds,” which left large blotches of paint behind when fired; marking an individual for possible later arrest.

Over the next several hours, running street battles took place between protesters and law enforcement, much of it within the parking lot of the nearby Target store. Rioters built barricades with shopping cars while police seemed to attack the crowd indiscriminately. Those on the streets, many very young, acted bravely in the face of intense police violence, protecting each other, treating tear-gas, and throwing back smoke canisters. As the evening wore on, people also looted the nearby liquor store and smaller clashes continued to break out with police until the early morning of Wednesday.

Teargas and “marker” rounds are products of Defense Technology, owned by Safariland, a riot control corporation in the US that supplies governments around the world in counter-insurgency projectiles, from Ferguson to Gaza. pic.twitter.com/TD6nH9wK9Y

The uprising comes after several months of rising unemployment and massive State inaction in the face of the coronavirus, which so-far has led to the deaths of over 100,000 people. People in the so-called US have also watched over the past month as both elite interests and neo-fascist groups have pushed jointly for the economy to “ReOpen,” which has only solidified poor and working-people, often of color, being placed onto the front lines of the pandemic. The fact that police have shown far-Right protesters nothing but kid gloves for the past month at various “ReOpen” rallies was also not lost on anyone, and many on social media pointed out the vast difference in police response.

The Minneapolis Uprising will surely be seen as a turning point in 2020, not only in terms of marking the first large scale grassroots rebellion against the State in the midst of the COVID-19 pandemic in the US, but also because it showed the drive of the people to take action in the face of various forces attempting to push them off the streets. But from activist protest managers, to police with high grade firepower, to even the State’s quick rush to fire the officers involved in the killing, all efforts failed in putting a wet blanket over the popular rage of the thousands who turned up Tuesday night and made chants of, “No Justice, No Peace,” not just an empty threat, but a promise of total ungovernability.