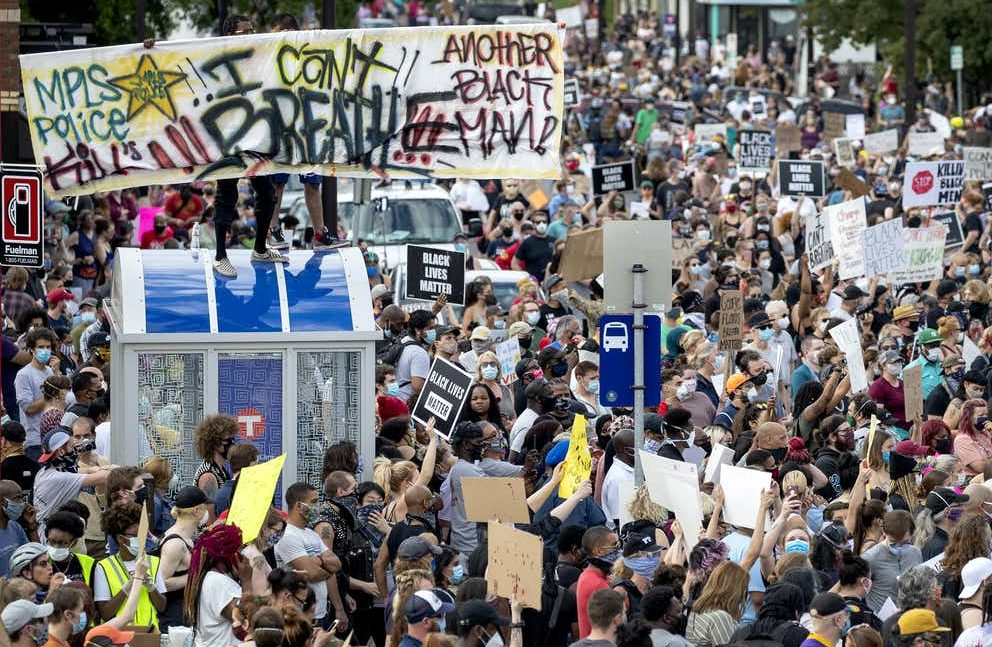 Above photo: Protesters gather calling for justice for George Floyd on Tuesday, May 26 in Minneapolis. By Carlos Gonzalez for the Star Tribune via AP.

The death of a handcuffed black man in police custody in Minneapolis has stoked anger and frustration among many Native people in the city.

Leaders say relations with law enforcement have remained strained in more than 50 years since the American Indian Movement was founded here in response to alleged police brutality.

The Metropolitan Urban Indian Directors Group, a collaborative of 30 Native organizations operating in the Twin Cities, released a scathing public letter Wednesday condemning George Floyd’s death, along with the “ongoing and systemic racist ideologies that continue to run strongly” through the Minneapolis Police Department.

The letter cites the department’s “long history of violence against Indigenous people and people of color,” including the 2011 shooting of an Alaska Native man at a Native American housing complex.

American Indian Movement leaders also expressed outrage over Floyd’s death at a news conference in an area of south Minneapolis known for its Native-owned businesses, housing, and community centers. AIM planned to set up a patrol of Native businesses Thursday night after fires damaged or destroyed 30 buildings in the city the night before, and rioting encroached on the corridor.

Meanwhile, Minnesota Gov. Tim Walz activated the state National Guard and urged widespread changes, saying it is time to rebuild: “Rebuild the city, rebuild our justice system and rebuild the relationship between law enforcement and those they’re charged to protect.”

Floyd, 46, died Monday while being arrested by Officer Derek Chauvin, who had Floyd pinned and restrained face-down on the street with a knee wedged against his neck.

A video filmed by a bystander captured Floyd’s pleas of “Please, man, I can’t breathe” and sparked a national outcry and protests in Minneapolis that have resulted in three days of rioting and looting. Demonstrations also spread to other U.S. cities, including Los Angeles, Denver, and Memphis.

“We (MUID) had our monthly board meeting Tuesday. I was trying to capture the sentiment of the board, which was powerful and emotional,” Hobot, 43, said by phone Thursday. “There’s been thousands of indignities that have been endured by our community that haven’t been publicized but are no less tragic.”

Minneapolis Police Chief Medaria Arradondo, who rose to the top job after his predecessor was forced out following the 2017 shooting of an unarmed white woman by a black Minneapolis officer, has said he is working to change the department’s culture.

The three-page letter was especially critical of Bob Kroll, president of the Minneapolis Police Federation, and praised the remarks of Minnesota’s attorney general and Minneapolis’ mayor, who in an unprecedented move called for charging and jailing Chauvin.

Chauvin and the other officers involved — Tao Thao, Thomas Lane, and J. Alexander Kueng — were all fired immediately after the incident. Thao was filmed watching Chauvin and ordering back witnesses who were pleading with Chauvin to unrestrain Floyd.

Chauvin and Thao have been involved in previous use-of-force cases.

In 2008, Chauvin shot Ira Latrell Toles in the abdomen, wounding him, in a domestic violence incident in south Minneapolis after Toles grabbed for an officer’s gun, reports say.

In 2017, Thao was sued for excessive force by Lamar Ferguson, who said he was handcuffed and thrown to the ground and punched by Thao and kicked by another officer. The lawsuit was settled for $25,000.

In August 2011, Chauvin was at the scene when another officer shot Leroy Martinez, an Alaska Native, at the Little Earth of United Tribes housing complex in south Minneapolis.

Accounts differ as to what happened. According to police, Martinez drew his gun and refused orders to drop it and was shot by Officer Terry Nutter.

But a resident of the complex, Delores Iceman, told the Minneapolis Star Tribune she saw the incident from her balcony. She said Martinez had his hands in the air after Nutter warned him he would shoot.

“He had no reason to shoot that little boy,” Iceman told the newspaper.

All of the officers were placed on standard three-day administrative leave. Martinez, 23 at the time, was charged with second-degree assault in connection with the original shooting. He was charged while recovering in the hospital. The alleged victim in that case recovered.

The officers returned to duty after then-Chief Tim Dolan found that they “acted appropriately and courageously” in the shooting and apprehension of Martinez.

In 2019, Minneapolis police officer Mohamed Noor was convicted of killing Justine Damond, a white woman who called 911 to report a possible sexual assault behind her house. Noor shot Damond from his car as Damond approached.

In February, the city settled with the family of Terrance Franklin for $795,000, more than six years after the 22-year-old black man was fatally shot by police.

“Since his appointment as chief (2017), he’s been very present in the community, at powwows in May and at our MUID meetings. We feel his hiring was a watershed moment, and we want to make clear to Rondo that we stand behind him.”

But Hobot’s letter alleges there is a longstanding vein of bigotry within the department that “emanates directly from leadership — specifically the president of the Minneapolis Police Federation.” It calls for Kroll’s resignation.

Kroll could not immediately be reached for comment but issued a statement earlier this week.

“Now is not the time to rush to judgment and immediately condemn our officers. We ask that the community remain calm and the investigation be completed in full,” he said in the statement to Forum News Service before Tuesday’s firings.

At the AIM news conference, co-director Frank Paro, Grand Portage Chippewa, noted his movement was founded in 1968 in response to police brutality in Minneapolis.

“They used to beat us and take us down to the river and leave us down there,” he said. “If we were lucky, they took us to jail and we got medical attention. In the 2000s, they aren’t beating us no more. They are killing us. That has to stop.”

“First of all, as a mother, grandmother and auntie, daughter and a sister, I couldn’t even watch the whole video, it made me so sick,” said AIM co-director Lisa Bellanger, Leech Lake.

“We support our community and other nations and know when it’s time to take action, but we can’t condone the violence, rioting and looting. This is where we shop, where our children play,” Bellanger said at the news conference, which was live-streamed on Facebook via Native Roots Radio.

Diane Grooms, Leech Lake, head of elder support services for the American Indian Community Development Corporation, works with residents at the city’s Bi Dii Gain elderly housing complex. She said establishments on both sides of the building have been boarded up in fear of vandalism and looting that has spread from demonstrations at a police precinct near the site of Floyd’s death.

Grooms said the elders had constructed posters praising coronavirus first-responders, including the Minneapolis Police Department, and hung them on windows for the public to see. But they took them down Thursday as rioters encroached on their building, fearing it would provoke vandalism.

“We see the violence erupting all across Turtle Island,” Bellanger said. “This is not about fighting violence with violence. We want justice for George Floyd, but we don’t want to do so by destroying our own communities.”

Dalton Walker, an Indian Country Today national correspondent, and The Associated Press contributed to this report.