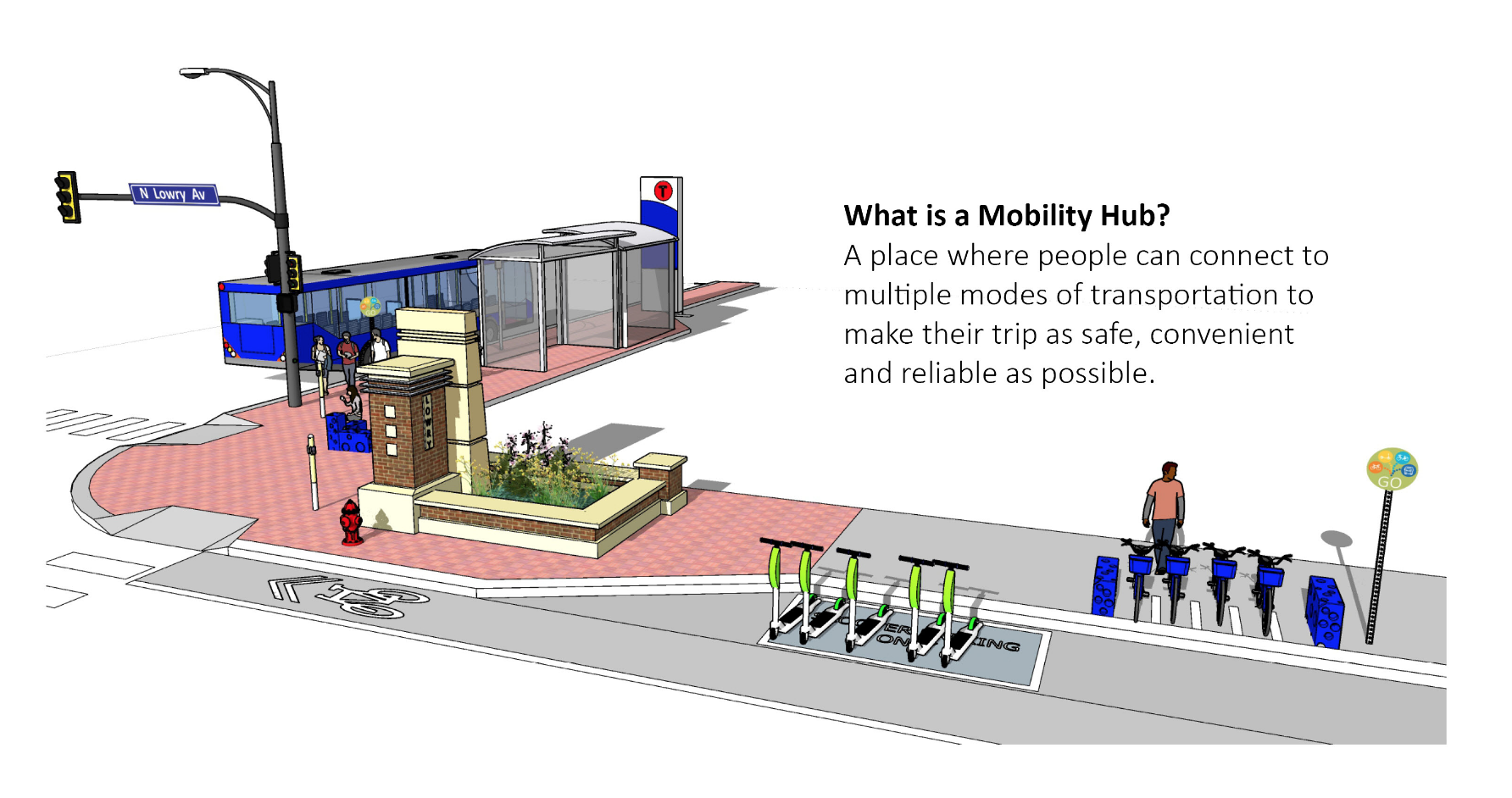 A rendering of a mobility hub. | Credit: City of Minneapolis

The idea of a mobility hub is not new, but at the same time it has not yet gained mainstream implementation. A German project manager is credited with devising the first integrated mobility hub 20 years ago to reduce the number of cars on the road and regain street space for other uses. Minneapolis looked to European examples, as well as domestic and regional ones, when developing its hub program.

“European cities are well on their way, much further than the U.S. is, on this concept of mobility hubs,” Johnson said. The basic idea centers on “how we can help people to change their thinking about how they currently move — whether that’s a personal car or some other means — and start thinking about what we have available at these mobility hubs that can make their trip more efficient, easier, more comfortable and how we can supplement the modes they’re using,” he added.

Mobility hubs can take numerous forms and include different forms of transportation such as buses, commuter trains, light rail and taxis. One model essentially is the well-known image of a “union station” where many transportation forms come together in one place.

But Minneapolis’ effort incorporates a few key elements common to modern mobility hubs: They involve little to no use of cars, and they include or are open to the idea of new transportation modes such as e-scooters. Los Angeles, San Diego and Columbus, OH are some cities that have launched or are working to implement mobility hubs.

The pilot program advances the goals in the Minneapolis 2040 comprehensive plan that is slated to take effect this fall. Specifically, the city aims to decrease vehicle trips by 37% to reduce emissions by 80% by 2050. “Providing these options and amenities that help people reconsider personal car use… helps us move the needle toward that end,” Johnson said.

The locations were determined by an in-depth analysis of existing neighborhood amenities and which areas could most benefit from the hubs. City employees analyzed 37 data sets including access to jobs, healthcare, parks and fresh foods; existing transportation options and infrastructure in the neighborhood; travel behavior; and demographic information.

“There were a number of layers of data that we overlaid and found some areas to focus on. We started doing work to understand within those areas what we might want to pinpoint as opportunities to implement. Then we’d combine that with engagement with neighborhood groups and other stakeholders to get an understanding of where these [hubs] might be desired,” Johnson said.

Locations for the remaining eight hubs in the pilot program are nearly finalized. However, some discussion around those sites is ongoing. Part of the program engagement consists of city staff and partners acting as ambassadors at the existing hubs to provide information about the amenities, as well as to collect public feedback.

Cold and snowy weather is a significant challenge facing Minneapolis’ mobility hubs in the coming months. The city’s bike-share program shuts down in the winter, then bikes are reintroduced in the spring. Johnson said the mobility hubs will be active through November, but the newly introduced e-scooter companies will be allowed to operate past that point if they choose — if conditions are deemed safe.

Planners want to learn how citizens interact with the hubs in inclement weather, not just in ideal conditions. They want to better understand how they could make the experience of waiting for the bus more pleasant for people.

“It was important for us to be able to test this in less than ideal conditions and use that to inform the longer term approach. Because, of course, if we do this longer term we can’t just shut it down at end of the season. This is something we want to make useful for people year-round,” Johnson said.

Minneapolis’ mobility hub program is paid for through a combination of city funding and a grant awarded for being named one of the winners of Bloomberg Philanthropies’ American Cities Climate Challenge.