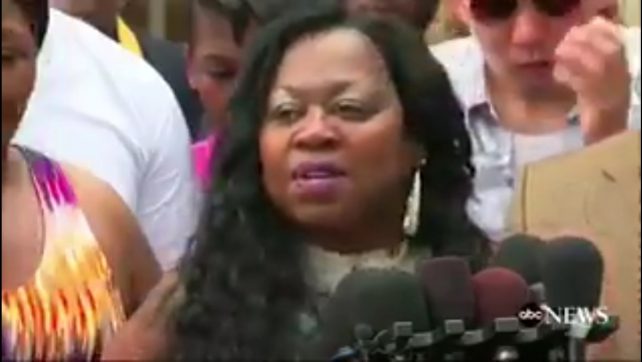 Above: “We are not evolving as a civilization, we are devolving.” Valerie Castile, mother of Philando, speaking to the press.

A mostly white jury acquitted Police Officer Jeronimo Yanez of the shooting death of Philando Castile, a Black man from Twin Cities, Minnesota, during a traffic stop. The verdict was delivered Friday afternoon after the jury deliberated for five days.

The shooting death of Castile happened on July 6, 2016, when Yanez pulled Diamond Reynolds over in Falcon Heights for a broken taillight. Castillo was riding in the front passenger seat and Reynolds’ 4 year old daughter was seated in a baby car seat behind them.

Reynolds, who was Castile’s girlfriend, began video taping the incident moments after Castile was shot. She kept a cool head while she narrated the intense drama, which depicted Castile dying in the front passenger seat next to her. She said she turned on her cell phone camera because she was in fear of her own life. As she taped her video live streamed on Facebook and went viral before it was taken down.

Officer Yanez had pulled over Reynolds at about 9 pm because of a broken taillight. In a patrol car voice recording of the incident, and before Reynolds began her cell video camera, Castillo can be heard telling Officer Yanez that he has a firearm and is licensed to carry it.

“Sir, I have to tell you that I do have a firearm on me.” Castillo said to Yanez. Yanez then said “Okay,” Yanez said to Castile not to pull out his gun. Castile said, “I’m not pulling it out,” Yanez then screamed, “Don’t pull it out,” while he pulled his own gun out and shot Castile. He fired seven shots in succession.

The last thing Castillo said before he lost consciousness was, “I wasn’t going to pull it out.”

Their four year old daughter sat in the backseat of the car. She was not hit though one shot penetrated Castile’s seat and hit the back seat next to the child. Reynolds also was not hit.

In preferring charges against officer Yanez later that month, John Choi, Ramsey County District Attorney said, “It is my conclusion that use of deadly force by Officer Yanez was not justified and that sufficient facts exist to prove this to be true.”

But the jury didn’t see it that way and after considering all the testimony and evidence presented at the trial, found no guilt in Yanez’s actions. He was acquitted of second degree manslaugter, a felony. He was also acquitted of two counts of dangerous discharge of a firearm, charges which stemmed from the fact that both Reynolds and her daughter were in the car.

Valerie Castille, mother of Philando Castile, railed against the verdict as she spoke to the press after the trial on the steps outside the court house. “The system continues to fail Black people and they will continue to fail you all,” she said, her voice rising in emotion and anger as she spoke. “But when they get done with us, they coming for you and you and you,” she said as she pointed towards the crowd. “We are not evolving as a civilization we are devolving,” she said.

For his part in Castilles death, Officer Yanez will no longer be a Police Officer in the state. Minnesota state has announced it will settle with Yanez and transition him out of the police force. He will not return to active duty.

One incident happened a day after the Philando Castile shooting, on July 7, 2016 and involved a mass shooting of Dallas police officers. Five police were killed and 9 wounded along with two civilians. The Dallas shooting took place after a Black Lives Matter protest over the police shooting death of Anton Sterling, another Black man shot in the back. That Sterling shooting incident was also caught in a cell phone camera.

While both of the assailants were killed by police, it is not known if the mass shootings of police officers were triggered by the killing of Philando Castile.

According the the Guardian database a project named The Counted, there were 1092 shooting deaths of civilians by U.S. police officers in 2016. The highest demographic of those shot were young Black men. Black men in the age group 15-34 were 9 times more likely to be killed than other groups. The figure also reflects a high rate of police shooting deaths than compared with other countries. For example there were 55 shooting deaths by police in the U.K. in the last 25 years. Diamond Reynolds Facebook video of moments after shooting.

Update: Several hours after the verdict, a protest which began at the St Paul State Capital building, made its way to I-94 freeway where there were 18 arrests, including several journalists.