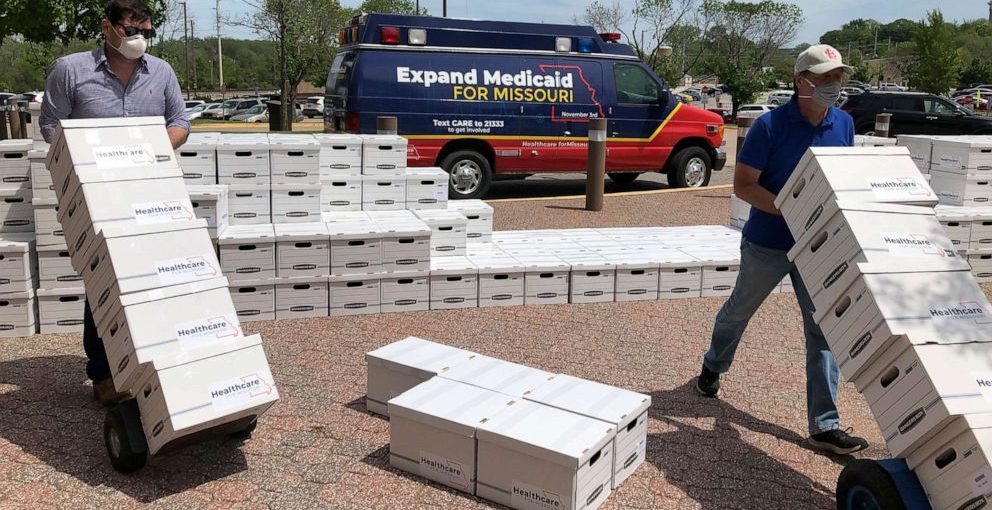 Missourians Did An End-Around Their Legislature To Expand Medicaid

For almost a decade, advocates in Missouri have been lobbying their legislators to expand Medicaid coverage in the red state.

Since the Supreme Court ruled in 2012 that the Medicaid expansion under the Affordable Care Act was optional, 36 states plus Washington, D.C., have adopted and implemented the expansion. In those states where coverage has not been expanded, the decision has come at a devastating cost to Americans who fall into the “coverage gap,” advocates said.

“When the Affordable Care Act was originally passed, folks who were making up to 138% of the federal poverty level were supposed to be on Medicaid. And folks making more than 138% of the federal poverty level would be given subsidies to buy coverage through the exchange or healthcare.gov,” Kelly Hall, director of health policy for the Fairness Project, told ABC News.

“Because some states haven’t expanded their Medicaid program, they are creating a problem for people who don’t make enough money to get the subsidies on the exchange, but they make too much money to be on their state’s Medicaid program.”

In the states that chose not to expand Medicaid coverage, the maximum income for Medicaid eligibility varies. In Missouri — which for now has one of the lowest Medicaid income eligibility limits in the U.S. — this meant that a family of three had to earn at most 21% of the federal poverty level, or $4,479 in 2019, annually to be eligible for Medicaid. Subsidies for the Affordable Care Act marketplace aren’t accessible until earning 100% to 400% of the federal poverty level.

After their conservative state legislature did not address the issue for years, Missourians mobilized by the thousands to get Medicaid expansion on the ballot. This year, Missouri became one of two states — along with Oklahoma — that voted to implement that expansion next year.

ABC News is examining the coverage gap and expansion of Medicaid as part of its “My America” video series, which highlights issues that are key to the electorate in the run-up to the 2020 election and spoke to voters and experts about the issue.

Fair Grove, Missouri resident Amber Ledbetter, a single mother of two, is one of the thousands of Americans without healthcare because their income falls into the “coverage gap.”

“It’s stressful, especially with the kids,” Ledbetter told ABC News. “I don’t want to end up in a position where I’m having to bankrupt my family just to get the health care that I need immediately.”

Ledbetter has Crohn’s disease, a chronic illness that causes her fatigue and pain and impacts her ability to work as a house cleaner. Last year, she was so sick she had to go to the emergency department.

“I was just caught in this gap that I didn’t know existed,” said Ledbetter, who has to take into consideration what she could get covered through charity when she discusses treatment options with her gastroenterologist.

Single mom Victoria Altic fell into the coverage gap last year. The Missouri resident racked up thousands of dollars in medical debt, she told ABC News, after several episodes of seizures a couple of years ago. She delayed seeking medical care for an ear infection, and the resulting visits caused her to go further into debt, she said.

“One of the worst parts about all of that, besides the actual health effects of not having health insurance, is the financial aspect, where you’re falling into debt,” said Altic, who was laid off from her restaurant job at the start of the coronavirus pandemic.

Erich Arvidson’s parents were in the coverage gap — both retired but not yet eligible for Medicare — when his father fell ill last year, he told ABC News.

“My sister and I were forced to make decisions for him based on what he could afford and not necessarily what was the best course of care for him,” the Boonville, Missouri, resident said.

His father died last February. Then, a few months later, his mother fell ill. “We had to make those same decisions just right away,” Arvidson said.

His mother died in July of last year.

“I determined then that I would do whatever I could to make sure that nobody else had to make those decisions based on what they did or didn’t have in their bank account,” Arvidson said.

In Missouri, citizens can petition to put constitutional amendments on the ballot. Arvidson was one of thousands of volunteers who worked to get the Medicaid expansion on the ballot as an amendment in August.

“Ballot measures are a team sport,” said Hall, of the Fairness Project, which focuses on ballot initiative efforts to promote economic and social justice. “It takes a lot of different folks putting money into the effort, putting sweat equity in the effort, standing on street corners with clipboards and talking to their neighbors.”

In Missouri, volunteers collected over 350,000 signatures from all over the state to get Medicaid expansion on the ballot, Hall said.

“We went everywhere,” Arvidson said. “We went to county fairs. We went to cotton carnivals and apple festivals and stood on town squares and just talked to people about it and gathered the signatures that we needed.”

On Aug. 4, Missourians voted 53% to 47% to pass the amendment to expand Medicaid coverage. The move came two months after Oklahoma also passed its expansion through a ballot measure.

That signaled to Hall and other experts that Medicaid expansion is “not a partisan issue anymore.”

“The same voters in Missouri and Oklahoma who are going to the polls to vote for President [Donald] Trump are also saying we want Medicaid expansion,” she said.

“Nobody ever really asked, well, is this a Democratic thing or is this a Republican thing?” Richard Von Glahn, policy director of the coalition Missouri Jobs With Justice, told ABC News. “Voters don’t actually think that way. They think, well, what is this actually going to mean for the state?”

Beyond Oklahoma and Missouri, other states, including Idaho, Maine, Nebraska and Utah, have voted to expand Medicaid through a ballot measure, as opposed to a bill.

“What we learned is that if we’re going to be successful in moving and shifting power in a state like Missouri, which is so adverse to providing equity for the poor and people of color, what we must do is organize and mobilize,” Dr. Rev. Vernon Howard, president of the Southern Christian Leadership Conference of Greater Kansas City and a community organizer for Missouri’s Medicaid expansion, told ABC News.

‘Step in the right direction’

Medicaid expansion coverage is set to begin in Missouri on July 1, 2021. The constitutional amendment, protected from changes by the state legislature, will impact about 230,000 low-income Missourians, according to Von Glahn — Missourians like Ledbetter and Altic.

“I know it’s still gonna take some time before I can take advantage of those health care options for Medicaid,” Ledbetter said. “But it’s a step in the right direction.”

The move will make a “huge difference” for Altic.

“I wouldn’t have to worry about whether I can go to the doctor if I have a small earache and wonder if it’s going to become something way worse,” she said.

For Howard, the passage was a sign of “hope to bring equal access to voting to the ballot.”