Mobilizing For A Culture Of Nonviolence This Fall

A National Call From Campaign Nonviolence

In the face of the Trump Administration’s priorities – demonizing immigrants, dismantling social programs, destroying environmental safeguards, diminishing civil rights, and dramatically increasing the prospect of war— we call on you, and your loved ones, and your friends—and all people everywhere—to be part of an unprecedented movement-of-movements for a culture of nonviolence free from war, poverty, racism and environmental catastrophe.

The time has come for powerful nonviolent resistance to challenge the calamity we face at this critical moment and to set our society on a new course.

The time has come for all of us to pool our nonviolent power to resist the tragedy we face and to signal, once and for all, our determination to build a world of peace, racial justice, economic equality, and a healthy planet for all.

The power of this movement will not be rooted in fear or hatred.  It will be grounded in our love for the earth and all its inhabitant. It will be nourished by courage and compassion.  And it will be fostered by the great way of nonviolence, which Dr. Martin Luther King, Jr. called “the love that does justice.”

THE CALL FOR NONVIOLENT ACTION IN SEPTEMBER 2017 and 2018

With this resolve, we invite people everywhere to join our powerful eighteen-month journey from now through the 2017 Week of Actions, Sept. 16-24 until the 2018 Campaign Nonviolence Week of Actions—September 15-23—when thousands of nonviolent actions will take place across the United States shortly before the pivotal US Congressional elections.

This is not an electoral strategy—it is larger than that.  Together we will take dramatic, nonviolent action in cities and towns across the US and around the world to frame the mid-term elections as a Referendum for a Nonviolent Future.  We will march and rally not to support specific candidates but to sharpen the choice before the nation and the world: Will we ratify the policies of violence and injustice—or will we set a new course for nonviolence, justice and peace?

The centerpiece of the September 2018 Action Week will be the Campaign Nonviolence Convergence in Washington, DC, a multi-day set of nonviolent actions in the nation’s capital dramatically magnifying the national and international mobilization of thousands of actions that week for a nonviolent future.

THE CALL TO BUILD MOMENTUM TOWARD SEPTEMBER 2018

Between now and the 2018 mid-term elections, we will be part of this historic effort to build a powerful people-power movement for nonviolent change.  To contribute to this growing momentum, Campaign Nonviolence calls on people everywhere to take the following concrete steps together. 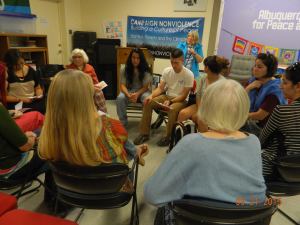 Together we will form affinity groups. It is hard to make change by ourselves. We therefore invite people everywhere to form Campaign Nonviolence Affinity Groups.  Affinity groups—usually consisting of between 5 and 10 people—are small action communities whose members support one another in taking action, studying nonviolence, reflecting on the realities of our time, and envisioning the way forward.  Affinity groups have been an important part of effective movements—and are needed now more than ever.

Together we will explore launching a Nonviolent City. Imagine “Nonviolent Seattle” or “Nonviolent Boston” or “Nonviolent Tokyo.”  Campaign Nonviolence calls on activists, organizers, local leaders, political and religious leaders and ordinary citizens in every city in the nation and beyond to organize their local community as a “Nonviolent City.”  So far, 35 cities across the US are exploring this.  Imagine your city as a culture of nonviolence—and the concrete, long-term steps it will take to get there. 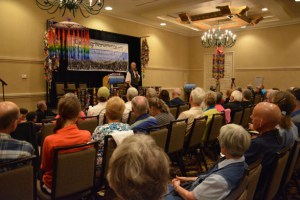 Together we call on people to organize local and regional gatherings and conferences in Spring 2018.  Campaign Nonviolence envisions local and regional assemblies across the US and beyond in Spring 2018.  We urge CNV friends around the nation to organize day-long gatherings, conferences, and retreats to plan for their local fall convergence and to deepen this movement for a culture of nonviolence.  Campaign Nonviolence staff are happy to assist in making these gatherings a reality.

Together we will take action nationally and internationally in September 2018 before the Congressional elections.  In addition to the thousands of actions we are planning throughout the US and around the world during the 2018 Campaign Nonviolence Week of Actions, the Campaign Nonviolence Convergence in Washington, DC will be a multi-day call for a nonviolent shift.  We are envisioning a day of nonviolence training; a day of lobbying on Capitol Hill; a day of nonviolent direct action; and a silent march from the Martin Luther King, Jr. Memorial to the White House.  Together—in Washington, across the country, and around the world—we will call on the nation to see the impending mid-term Congressional elections as a decisive Referendum for a Nonviolent Future.

THE CALL TO BUILD AN HISTORIC MOVEMENT

What will it take to build a culture of nonviolence?  A society where everyone counts? A world where there is peace for all, racial justice for all, economic equality for all, a healthy planet for all, and nonviolent solutions for all?

These kinds of questions have prompted women and men throughout history to grapple powerfully with towering injustice and to make concrete change possible.  Each step forward in the age-old task of definitive liberation for all has been ultimately rooted in such a vision—and, at the same time, has helped to make that vision more clear and real.

Such a direction is needed now more than ever.  We are in new territory, and things will likely get worse before they get better.  That is why we need each other at this decisive time—to take action together, train together, build community together, envision nonviolent cities together, and mobilize together.

As challenging as things are, we know that nonviolent strategies for social change are twice as effective as violent ones, as the quantitative analysis of Erica Chenoweth and Maria Stephan documented in their groundbreaking book, Why Civil Resistance Works.  There is something else that their research established: movements which activate 3.5% of the population are likely to succeed.  In the United States this is a tall order—12 million people—but we envision working with many campaigns and movements over the next eighteen months to help build such an unprecedented movement-of-movements seeking to connect the dots between issues, to achieve concrete goals of justice and peace, and to lay the foundation for building a culture of peace and nonviolence.

Nonviolence combines an unmistakable rejection of violence with the power of love and truth for justice, peace, and care for the earth. It is a powerful means of struggle and resistance, creativity and compassion, and healing and forgiveness.  It is a way of life and a method for effective change.

As Pope Francis recently declared, “A culture of nonviolence is not an unattainable dream, but a path that has produced decisive results.  The consistent practice of nonviolence has broken barriers, bound wounds, healed nations.”

We call on you – and all who read this declaration— to join this movement, to build Campaign Nonviolence wherever you are, and to mobilize the nation for this long-term work of creating this new culture of nonviolence.

Please send this call to all your friends and colleagues, to all your groups and religious communities, to students, activists and people across the nation.  Post this call on social media, and help spread it far and wide. (Download a PDF copy here)

At this critical turning point, let us take powerful nonviolent action together to resist the enormous challenge of violence and injustice we face in this perilous moment and to boldly shine the light of nonviolence in our lives, our communities, our societies and our world.