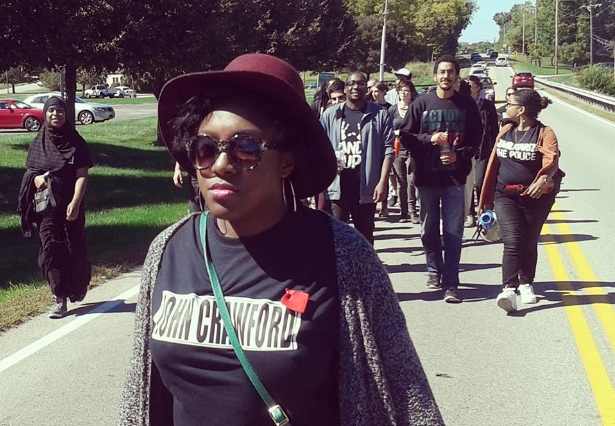 Mobilizing For Racial Justice In The Face Of Tragedy

Last month, John Crawford III was shot and killed in a Wal-Mart just outside of Dayton, Ohio. He had gone to the chain store to get S’more ingredients for a cookout later that day. As he wandered through the aisles, talking on the phone to his girlfriend LeeCee Johnson, Crawford picked up a BB gun lying on the shelf. Seeing this, 24-year-old Ronald Ritchie called Beavercreek police, informing them that there was a “gentleman walking around with a gun in the store…pointing it at people.” Ritchie later changed his story, admitting to The Guardian that “At no point did he shoulder the rifle and point it at somebody.”

This admission did little for the 21-year-old Crawford, who was gunned down by Beavercreek police officer Sean Williams just five minutes after Ritchie’s call. Still on the line, Johnson — mother of Crawford’s two young children — heard her partner’s last words: “It’s not real.”

Since the shooting, the Ohio Student Association has mobilized in communities across the state. Their demands were three-fold: bring national attention and pressure to Greene County, bring together youth organizers (especially young people of color) activated by the recent string of police killings, and “create a situation” that would demand the Department of Justice take over the investigation from the Ohio Attorney General’s Office. The group also called on Wal-Mart and Ohio Attorney General Mike DeWine to release the store surveillance footage from the shooting. They publicized their efforts on social media under the hashtags #ReleasetheTapes and #BlackLivesMatter, which had been used earlier this summer around the police killing of Michael Brown in Ferguson, Mo.

The Ohio Student Association, or OSA, was founded in 2012 as a collection of students and community members who “believe that every young person should have access to quality education from pre-K to college,” according to the group’s website. Since forming, OSA has focused on a number of racial justice issues — from ending “zero tolerance” policies and taking on the school-to-prison pipeline, to campaigns around student debt. Most recently, they partnered with the group Freedomside for a “Freedom Summer” in Ohio, which was described as “a summer of social justice education, voter engagement, and community celebration” on the anniversary of the original Freedom Summer in 1964.

On August 18, the group held a rally for Crawford in Columbus, following another earlier action in Cleveland. They later led a march in Beavercreek, which brought an estimated 200 people out to the town’s police station. In coordination with the group Freedomside, OSA coordinated two days of continuous activity outside of the grand jury hearing in Beavercreek, including workshops and mass meetings. One of the best publicized of these events was an 11-mile march on September 22 from the Beavercreek Wal-Mart where Crawford III was killed, to the county courthouse in Xenia, Ohio, where a grand jury hearing on the incident was being held. Solidarity actions were also planned across the state.

DeWine initially refused to release footage from the shooting, and claimed that it would inhibit a fair trial, likening it to “playing with dynamite.” Under pressure, however, his office agreed to release the footage to the grand jury, Crawford’s family and, eventually, the public. The grand jury’s decision — announced by special prosecutor Mark Peipmeier on September 24 — was ultimately not to indict the officers involved with the shooting. According to OSA co-founder James Hayes, who spoke toDemocracy Now! last week, “none of us were shocked.” In another interview with local radio station WKSU, Hayes stated plainly, “It’s clear there is no justice to be found here in Greene County.”

Justice for John Crawford, or any victim of all-too-common police violence, is a tough metric to judge. A status update from OSA’s Facebook page reads: “In spite of the decision by the Greene County grand jury not to indict the police responsible… we met our goals for the 11-mile Journey for John Crawford. The Department of Justice has agreed to do a thorough investigation of the case and the horrific tapes of John Crawford’s death have been released.”

In setting achievable goals, OSA has set itself up to continue building momentum in their longer fight for racial justice. Their standards of success have been defined in large part by their ability to mobilize, rather than the decisions of local, state and federal officials. At the end of the above-mentioned status-update, the group announced two mass meetings in Dayton and Columbus, respectively. A post from later that day shows that both were well attended.

In the aftermath of Wednesday’s announcement, OSA will continue its organizing efforts on this issue — this time under the hashtag #OneWeek. Sadly, deaths like John Crawford’s have become all too common. OSA joins a growing movement against the criminalization of black youth that was catalyzed this summer in Ferguson. Building on years of statewide organizing infrastructure, the work of OSA is a positive example for what it can look like to mobilize in the face of tragedy and deep-seated injustice.

Kate Aronoff is an organizer and freelance journalist based in Philadelphia, PA. While in school, she worked extensively with the fossil fuel divestment movement on the local and national level, co-founding Swarthmore Mountain Justice and the Fossil Fuel Divestment Student Network (DSN). She is currently working to build a student power network across Pennsylvania. Follow her on Twitter @katearonoff