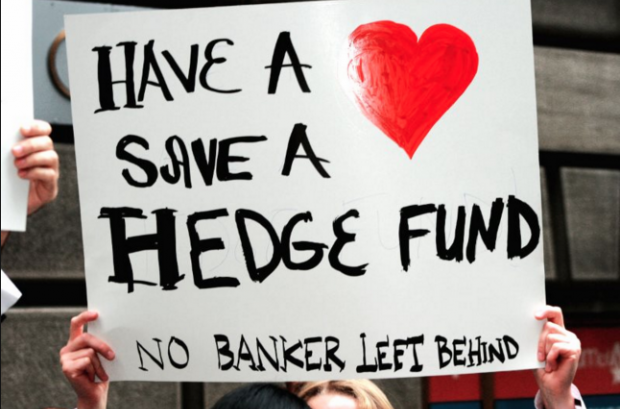 The world is undergoing a populist revival. From the revolt against austerity led by the Syriza Party in Greece and the Podemos Party in Spain, to Jeremy Corbyn’s surprise victory as Labour leader in the UK, to Donald Trump’s ascendancy in the Republican polls, to Bernie Sanders’ surprisingly strong challenge to Hillary Clinton – contenders with their fingers on the popular pulse are surging ahead of their establishment rivals.

Today’s populist revolt mimics an earlier one that reached its peak in the US in the 1890s. Then it was all about challenging Wall Street, reclaiming the government’s power to create money, curing rampant deflation with US Notes (Greenbacks) or silver coins (then considered the money of the people), nationalizing the banks, and establishing a central bank that actually responded to the will of the people.

Over a century later, Occupy Wall Street revived the populist challenge, armed this time with the Internet and mass media to spread the word. The Occupy movement shined a spotlight on the corrupt culture of greed unleashed by deregulating Wall Street, widening the yawning gap between the 1% and the 99% and destroying jobs, households and the economy.

Donald Trump’s populist campaign has not focused much on Wall Street; but Bernie Sanders’ has, in spades. Sanders has picked up the baton where Occupy left off, and the disenfranchised Millennials who composed that movement have flocked behind him.

The Failure of Regulation

Sanders’ focus on Wall Street has forced his opponent Hillary Clinton to respond to the challenge. Clinton maintains that Sanders’ proposals sound good but “will never make it in real life.” Her solution is largely to preserve the status quo while imposing more bank regulation.

That approach, however, was already tried with the Dodd-Frank Act, which has not solved the problem although it is currently the longest and most complicated bill ever passed by the US legislature. Dodd-Frank purported to eliminate bailouts, but it did this by replacing them with “bail-ins” – confiscating the funds of bank creditors, including depositors, to keep too-big-to-fail banks afloat. The costs were merely shifted from the people-as-taxpayers to the people-as-creditors.

Worse, the massive tangle of new regulations has hamstrung the smaller community banks that make the majority of loans to small and medium sized businesses, which in turn create most of the jobs. More regulation would simply force more community banks to sell out to their larger competitors, making the too-bigs even bigger.

In any case, regulatory tweaking has proved to be an inadequate response. Banks backed by an army of lobbyists simply get the laws changed, so that what was formerly criminal behavior becomes legal. (See, e.g., CitiGroup’s redrafting of the “push out” rulein December 2015 that completely vitiated the legislative intent.)

What Sanders is proposing, by contrast, is a real financial revolution, a fundamental change in the system itself. His proposals include eliminating Too Big to Fail by breaking up the biggest banks; protecting consumer deposits by reinstating the Glass-Steagall Act (separating investment from depository banking); reviving postal banks as safe depository alternatives; and reforming the Federal Reserve, enlisting it in the service of the people.

Sanders’ proposals are a good start. But critics counter that breaking up the biggest banks would be costly, disruptive and destabilizing; and it would not eliminate Wall Street corruption and mismanagement.

Banks today have usurped the power to create the national money supply. As the Bank of England recently acknowledged, banks create money whenever they make loans. Banks determine who gets the money and on what terms. Reducing the biggest banks to less than $50 billion in assets (the Dodd-Frank limit for “too big to fail”) would not make them more trustworthy stewards of that power and privilege.

How can banking be made to serve the needs of the people and the economy, while preserving the more functional aspects of today’s highly sophisticated global banking system? Perhaps it is time to reconsider the proposals of the early populists. The direct approach to “occupying” the banks is to simply step into their shoes and make them public utilities. Insolvent megabanks can be nationalized – as they were before 2008. (More on that shortly.)

Making banks public utilities can happen on a local level as well. States and cities can establish publicly-owned depository banks on the highly profitable and efficient model of the Bank of North Dakota. Public banks can partner with community banks to direct credit where it is needed locally; and they can reduce the costs of government by recycling bank profits for public use, eliminating outsized Wall Street fees and obviating the need for derivatives to mitigate risk.

At the federal level, not only can postal banks serve as safe depositories and affordable credit alternatives, but the central bank can provide a source of interest-free credit for the nation – as was done, for example, with Canada’s central bank from 1939 to 1974. The U.S. Treasury could also reclaim the power to issue, not just pocket change, but a major portion of the money supply – as was done by the American colonists in the 18thcentury and by President Abraham Lincoln in the 19th century.

Nationalization: Not As Radical As It Sounds

Radical as it sounds today, nationalizing failed megabanks was actually standard operating procedure before 2008. Nationalization was one of three options open to the FDIC when a bank failed. The other two were (1) closure and liquidation, and (2) merger with a healthy bank. Most failures were resolved using the merger option, but for very large banks, nationalization was sometimes considered the best choice for taxpayers.  The leading U.S. example was Continental Illinois, the seventh-largest bank in the country when it failed in 1984.  The FDIC wiped out existing shareholders, infused capital, took over bad assets, replaced senior management, and owned the bank for about a decade, running it as a commercial enterprise.

What was a truly radical departure from accepted practice was the unprecedented wave of government bailouts after the 2008 banking crisis. The taxpayers bore the losses, while culpable bank management not only escaped civil and criminal penalties but made off with record bonuses.

In a July 2012 article in The New York Times titled “Wall Street Is Too Big to Regulate,” Gar Alperovitz noted that the five biggest banks—JPMorgan Chase, Bank of America, Citigroup, Wells Fargo and Goldman Sachs—then had combined assets amounting to more than half the nation’s economy. He wrote:

With high-paid lobbyists contesting every proposed regulation, it is increasingly clear that big banks can never be effectively controlled as private businesses.  If an enterprise (or five of them) is so large and so concentrated that competition and regulation are impossible, the most market-friendly step is to nationalize its functions. . . .

Nationalization isn’t as difficult as it sounds.  We tend to forget that we did, in fact, nationalize General Motors in 2009; the government still owns a controlling share of its stock.  We also essentially nationalized the American International Group, one of the largest insurance companies in the world, and the government still owns roughly 60 percent of its stock.

A more market-friendly term than nationalization is “receivership” – taking over insolvent banks and cleaning them up. But as Dr. Michael Hudson observed in a 2009 article, real nationalization does not mean simply imposing losses on the government and then selling the asset back to the private sector. He wrote:

Real nationalization occurs when governments act in the public interest to take over private property. . . . Nationalizing the banks along these lines would mean that the government would supply the nation’s credit needs. The Treasury would become the source of new money, replacing commercial bank credit. Presumably this credit would be lent out for economically and socially productive purposes, not merely to inflate asset prices while loading down households and business with debt as has occurred under today’s commercial bank lending policies.

A Network of Locally-Controlled Public Banks

“Nationalizing” the banks implies top-down federal control, but this need not be the result. We could have a system of publicly-owned banks that were locally controlled, operating independently to serve the needs of their own communities.

As noted earlier, banks create the money they lend simply by writing it into accounts. Money comes into existence as a debit in the borrower’s account, and it is extinguished when the debt is repaid. This happens at a grassroots level through local banks, creating and destroying money organically according to the demands of the community. Making these banks public institutions would differ from the current system only in that the banks would have a mandate to serve the public interest, and the profits would be returned to the local government for public use.

Although most of the money supply would continue to be created and destroyed locally as loans, there would still be a need for the government-issued currency envisioned by the early populists, to fill gaps in demand as needed to keep supply and demand in balance. This could be achieved with a national dividend issued by the federal Treasury to all citizens, or by “quantitative easing for the people” as envisioned by Jeremy Corbyn, or by quantitative easing targeted at infrastructure.

For decades, private sector banking has been left to its own devices. The private-only banking model has been thoroughly tested, and it has proven to be a disastrous failure. We need a banking system that truly serves the needs of the people, and that objective can best be achieved with banks that are owned and operated by and for the people.