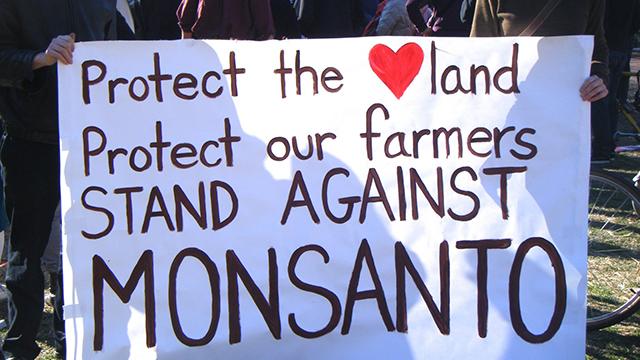 Monsanto And Dupont Set To Sue Vermont Over GMO Labeling

Vermont will become the first state to enact a law requiring labels on foods with genetically modified ingredients after the governor signed the bill into law on Thursday afternoon. The bill will go into effect in July 2016.

“I am proud of Vermont for being the first state in the nation to ensure that Vermonters will know what is in their food. The Legislature has spoken loud and clear through its passage of this bill,” Gov. Peter Shumlin (D-Vt.) said in a statement after the bill passed. “I wholeheartedly agree with them and look forward to signing this bill into law.”

The law will likely still face legal challenges from major food companies like Monsanto Co. and DuPont Co – the leading producers of GMO crops. They are widely expected to sue the state over the law. To defend the legislation, Vermont allocated a $1.5 million legal defense fund in the measure, to be paid for with settlements won by the state. However, even this amount might not be enough to cover the state’s legal bills.

Monsanto, DuPont, Kraft Foods Co. and others previously led the charge against the similar labeling legislation in California and Washington state, grossly outspending supporters of the measure that was eventually defeated in both states, with anti-labeling groups spending $22 million of the $28 million total spent on that campaign in Washington.

“There is no doubt that there are those who will work to derail this common-sense legislation,” Shumlin said. “But I believe this bill is the right thing to do and will gain momentum elsewhere after our action here in Vermont.”

The Center for Food Safety says there are currently 63 active genetically modified organism (GMO) labeling bills in 23 states, and 32 bills have been introduced since January, the Guardian reports.

A bill that would require labels on food products containing ingredients from genetically modified crops passed a hurdle in the New York Assembly Thursday morning. Maine and Connecticut are the only US states that have passed GMO labeling laws, though their proposals would only go into effect if and when surrounding states also pass similar laws. GMO labeling is required in 64 countries, including the European Union.

“Companies shouldn’t be able to do an end run by slapping a ‘natural’ label on a product that contains GMOs as, unfortunately, they are allowed to do today,” Urvashi Rangan, executive director of the Consumer Reports Food Safety and Sustainability Center, said according to the Guardian. “Leave it to the state of Vermont to pick up where the FDA has left off when it comes to defining natural.”

Opponents of GMO labeling laws argue the labels would create a false perception that the foods are unhealthy, despite a lack of scientific evidence, Hillshire Brands Co. Chief Executive Officer Sean Connolly told Bloomberg in an interview. If the labeling is going to be required, he would prefer the regulations come from the federal government.