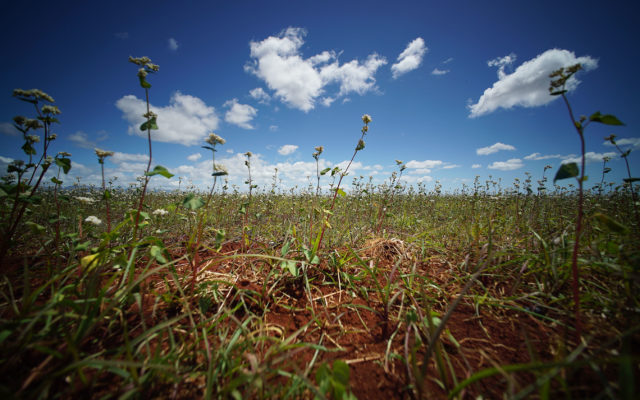 Monsanto Will Plead Guilty To Illegal Use Of Pesticide In Hawaii

Above Photo: Monsanto, whose holdings include land off Kunia Road on Oahu, was fined more than $22 million Thursday for pesticide use violations. Cory Lum / Civil Beat.

And Will Pay Additional $12m.

In court documents filed on 9 December in Hawaii, Monsanto agreed to plead guilty to 30 environmental crimes related to the use of a pesticide on corn fields in Hawaii, and the company further agreed to plead guilty to two other charges related to the storage of a banned pesticide that were the subject of a 2019 Deferred Prosecution Agreement (DPA).

Monsanto admitted in a plea agreement that it committed 30 misdemeanor crimes related to the use of a glufosinate ammonium-based herbicide product sold under the brand name Forfeit 280. After using the product in 2020 on corn fields in Oahu, Hawaii, Monsanto allowed workers to enter the fields during a six-day “restricted-entry interval” (REI) after the product was applied.

The plea agreement calls for Monsanto to serve three years of probation, pay a total of $12 million and continue for another three years a comprehensive environmental compliance program that includes third-party auditor.

As a result of the conduct in which Monsanto allowed workers on 30 occasions to enter fields sprayed with Forfeit 280 during the REI, the company violated a 2019 DPA related to the storage of a banned pesticide. According to the documents filed in court, Monsanto will plead guilty to two felony charges filed in 2019 that the government would have dismissed if the company had complied with federal law. In conjunction with the DPA related to the two felony charges of illegally storing an acute hazardous waste, Monsanto pleaded guilty in early 2020 to a misdemeanor offence of unlawfully spraying a banned pesticide – specifically methyl parathion, the active ingredient in Penncap-M – on research crops at one of its facilities on Maui.

“The defendant in this case failed to follow regulations governing the storage of hazardous wastes and the application of pesticides, putting people and the environment at risk,” said Scot Adair, Special Agent in Charge of the Environmental Protection Agency’s criminal enforcement program in Hawaii. “Today’s plea agreement shows that EPA will hold responsible those who violate laws designed to protect communities from exposure to hazardous chemicals.”

In the new case, Monsanto admitted that “due to a lack of oversight and supervision by Monsanto,” its workers violated a change to the REI period after the spraying of Forfeit 280 “by entering the fields 30 times to perform field-corn scouting within six days of spraying.” (“Corn scouting” consists of checking the corn for things such as weeds, insects and disease.) The REI change for Forfeit 280 – which was extended from 12 hours to six days – was part of an industry-wide change for products containing glufosinate ammonium prompted by an EPA decision in late 2016.

Monsanto admitted that it violated the Federal Insecticide, Fungicide, and Rodenticide Act (FIFRA), which regulates the registration, sale, distribution and use of pesticides, by failing to comply with Forfeit 280’s labelling. The label for Forfeit 280 stated: “It is a violation of Federal law to use Forfeit 280 in a manner inconsistent with its label.” Monsanto illegally used Forfeit 280 on Oahu facilities known as Lower Kunia and Haleiwa.

In the 2019 case related to Penncap-M, Monsanto pleaded guilty to a misdemeanor offence of unlawfully spraying the banned pesticide on corn seed and research crops at its Valley Farm facility on Maui in 2014. Monsanto admitted using Penncap-M in violation of FIFRA, even though the company knew its use was prohibited after 2013 pursuant to a “cancellation order” issued by the EPA. The company further admitted that, after the 2014 spraying, it told employees to re-enter the sprayed fields seven days later – even though Monsanto knew that workers should have been prohibited from entering the area for 31 days.

The felony offences covered by the DPA – the two charges to which Monsanto will plead guilty – are the unlawful storage of an acute hazardous waste in violation of the Resource Conservation and Recovery Act (RCRA). Penncap-M was a “restricted use pesticide” that could not be purchased or used by the public, and it could only be used by a certified applicator because of the possible adverse effects to the environment and injury to applicators or bystanders that could result.