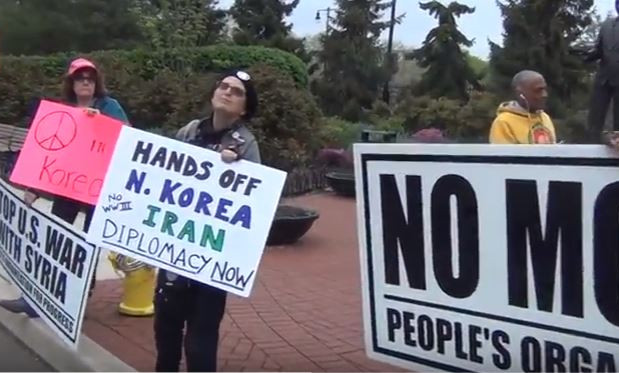 Monthly Rally In Newark Against US War Escalations / Threats #NJSaysNoToWar

Largely with the local support of the Peoples Organization for Progress, anti-war activists including
Newark residents and those from surrounding communities have converged on the Martin Luther King Jr. monument for protests against the various escalations and threats of war by the US administration 3 times since early April. The events have also received strong support from NJ Peace Action and the Green Party of New Jersey.

We are now considering a proposal to make this type of activity a monthly event, picking a particular Friday of each month.

The proposal is not just to show up for an hour plus protest and then go home but to incorporate into the effort a concerted organizing drive with the goal of connecting to the local pedestrian and vehicle traffic and to integrate the war issues we are raising with the related devastation of the war related economic issues and how the war economy directly and adversely impacts the Newark community.

The monthly event should include organizing during the “in between” times and in the hours before each gathering as well as during the gathering to reach out and connect with pedestrians, shop owners, labor organizations, schools, religious institutions, housing and other outlets in the surrounding blocks.

The most recent anti-war protest we held at the MLK monument occurred Friday June 2.  Prior to the protest, Ruben Mendez and I spent about an hour and a half reaching out on the neighboring blocks, including near the St. Benedicts Prep school Newark Arts High School and also including on the campus of Essex County College.

We will certainly be doing further follow up to explore expanding a connections with the local youth and others.   The goal will be to determine ways to increase local participation perhaps through the selection of the themes of our events – and possibly also by incorporating music and poetry and other artistic presentations into the events.We shared the flier with a write up of the event and what our anti-war demands throughout the nearby street corners.  For those who expressed support for our anti-war demands, we invited them to hold signs protesting US war moves and threats against Korea.  About 20 people agreed and also allowed us to take pictures with their phones as well and agreed to post the pictures to their social networks.  Some of those we photographed confirmed that it was the first time they had ever held up a protest sign.

The following would be some of the goals of the monthly anti-war presence and the accompanying organizing drive:
2. RESEARCH / PRINTED PAPER: The organizing effort would develop information and written materials about exactly how the US war escalation is directly impacting the city of Newark through cutbacks and under funding of Newark’s schools, housing, SNAP, recreation and other basic human needs of the community.  Perhaps a 4 page newspaper will be utilized and distributed regularly at the events and during the in between organizing efforts.1. RESPOND TO WAR MOVES: The monthly protest would respond to the developments – acts of war and threats as they occur in the in between weeks and would continue to press demands.  It would also provide an established point of connection for any need for emergency response as dangerous escalations including toward nuclear confrontation should occur.

3. INTEGRATED ORGANIZING: The organizing drive will also continue to share and promote information about other struggle oriented activism occurring in Newark including the events of Peoples Organization for Progress and other organizations on the forefront of various Newark struggles.  Any printed material would include information about events and how to get involved in such organizations.

4. OFFER SMALL FIRST STEPS: We will develop ways for people to participate in very small ways initially, like the picture taking described above and use that as a way to help local people get more comfortable with greater participation in our events and like minded community events.

5. SYSTEMATIC ORGANIZING: We will develop an approach to the local schools including St. Benedicts and Arts High School and Essex County College, local businesses including shops that are willing to have our printed materials on display, local religious institutions, local unions as well as to those facing the rigors of the criminal justice system at the nearby courthouse.  We will develop outreach to the various constituencies in the close by area.  We will also reach out to organizations around Newark, to Rutgers Newark student body and faculty and brainstorm an approach that at least informs all of the movement infrastructure of Newark with the hopes of engaging more and more constituencies in our activities.
6. SHARED VENUE: We will link our anti-war protest to the demands of various like minded struggles and offer the venue for unified protest as need be given the developments that are occurring on the ground in Newark.
7. STIPENDED ORGANIZING: We will explore through use of “fund me” sites the potential to collect funds to offer stipends to one or more organizers that will be committed to moving this process forward.

FIRST STEPS: This is the proposal.  Of course an early stop of the proposal will be to present it to the POP General Assembly (which meets each Thursday, 6:30 pm at Abysinnian Baptist Church, 224 West Kinney Street in Newark – a few blocks from where we have been protesting.)

I am proposing that keeping with the other events we have organized recently in Newark – we shoot for Friday 4:30 pm (time can slide either way) – I would propose the first Friday of each month but if others have reasons why it should be 2nd, 3rd or 4th – that could be considered as well.

Organizations should circulate the proposal to their membership and begin the decision making process.

Feedback, ideas and support for the proposal can be offered on the form at this link:
https://goo.gl/forms/ukakjXxs3F2g5R082