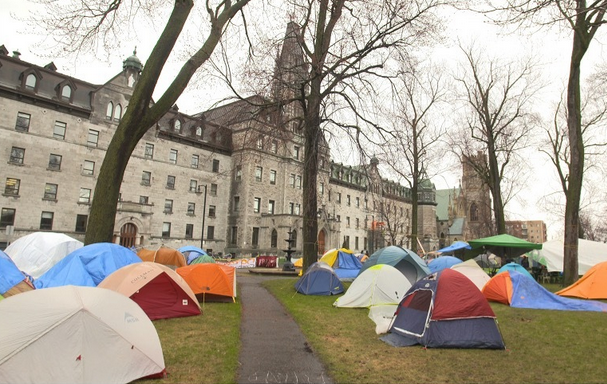 In an effort to breathe new life into the somewhat dwindling anti-austerity movement, nearly 100 students have set up a makeshift campsite outside a Montreal CÉGEP school.

In Quebec, protests against the provincial Liberal government’s austerity measures have been becoming smaller yet increasingly creative, with events like a non-mixed feminist march, the UQAM occupation—which led to violent mayhem and the arrest of more than a dozen students—and a “die-in” in opposition to health-care cuts that would threaten access to abortion.

But CÉGEP de Saint Laurent students—most between 16 and 20 years old—claim these methods are no longer cutting it, and have opted to build a more “permanent” symbol of their dissent. As of Thursday, more than 60 tents lined the school grounds.

“It’s another way to protest and get our message across because, while the protest marches work, there are fewer and fewer people attending, and we get pepper sprayed all night,” said one student named Alex. “This is a new way of doing things.”

Channeling 2011’s Occupy Wall Street movement, the students have baptized the movement Occup’ Toute (Occupy Everything) and have written a manifesto detailing their motivations.

“We are on the ruins of a society,” it outlines in French. “Our minds become stranded on the reef of capitalism and are broken and eroded before they deteriorate into a bottomless pit.”

Taking on a heavy mandate, the students are now trying to maintain the momentum of aprovince-wide protest movement that’s slowed down considerably since the student strikes began to settle.

So far, the group has shied away from mainstream media, proclaiming that such coverage is biased. They’ve also decided against the appointment of a leader or spokesperson. Student Andra Floria explained that this is because they are all protesting for a variety of “individual reasons.”

“I’m doing this because the system really pisses me off and I would like to wreck it,” said Alex. “But for now I can’t do anything about it, so I’m trying to live alternatively.”

Since the first tents were pitched on April 20, the site has become increasingly sophisticated and now includes a first-aid tent and a fully functional kitchen. Floria explained that, through donations and dumpster diving, the group has been able to provide protesters with three meals a day “and occasional snacks.”

The campground is governed by a code of conduct, which dictates that all discourse be feminized or gender neutral, that all social interactions reflect consent culture, and that defined spaces be respected. Campground dwellers must also keep the space free of discriminatory language, mass media, police, security guards, authority figures, alcohol, drugs, and even tobacco.

So far, the school administration has tolerated the impromptu tent city but said they’re planning more meetings with the students, who continue to attend their classes.

Police have also been keeping their distance, and while they’ve driven by, they have not confronted the students. “Cops are not allowed on CÉGEP grounds unless the administration calls them,” said Floria. “It’s a private property.”

The students say they plan on occupying the site for about three weeks, or at least until the May Day protest.

“We’re going to stay as long as we want, really,” said Alex.