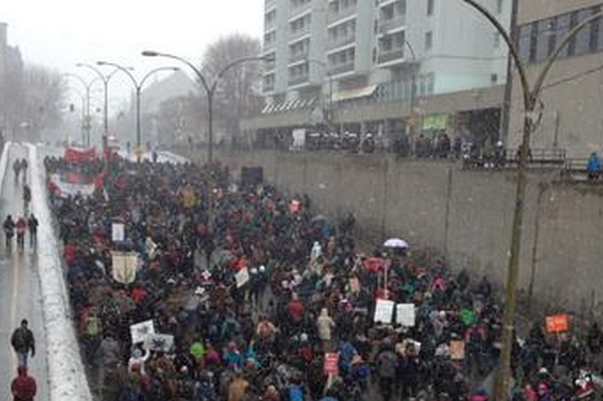 Some organizers interviewed by CTV Montreal explained the aims of the demonstration:

“We want to mobilize people on the issue of having accessible public services all over the province,” said Camille Godbout of the ASSE student group.

“We’re starting to see an approach where government doesn’t have our best interests at heart,” said Fanny Poirier of the Spring 2015 Protest Committee.

Police arrested one demonstrator for allegedly assaulting an officer. They handed out three tickets, two for violating a municipal bylaw banning the use of firecrackers and another for violating the P-6 ban on wearing masks at protests.

The Montreal Gazette reported that organizers of the protest said this will be one of several demonstrations to be held over the next few months.

“Today, we’re proud to launch a raucous spring,” said Fannie Poirier, spokesperson for the Spring 2015 protest committee. “Austerity measures have been presented as the lesser of evils to confront a deficient economy. But what we’re seeing … is a massive impoverishment of the population, full-frontal attacks on working conditions and a loss of security for society’s most vulnerable people.”

Organizers said they did not provide a route to police, which technically made the event illegal under municipal bylaw P-6. Police, however, seemed content to allow the protest to move forward as long as nobody acted violently.

“Freedom of demonstration in Montreal has been attacked massively over the past couple of years,” Poirier said. “We’re putting a message out there to the police force that we’re trying to do something good for society, which also concerns them. … We don’t consider (providing an itinerary) to be obligatory.”