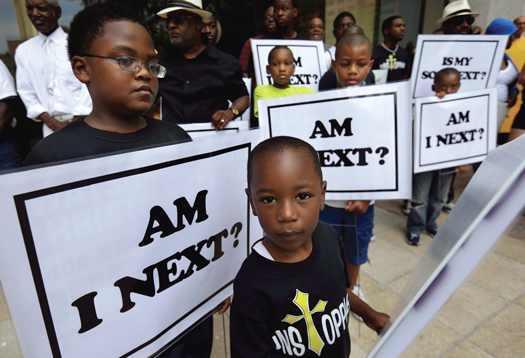 The Ferguson, Moral Monday protest brought people of all ages into the streets of Ferguson and St. Louis seeking justice. Rev. Osagyefo Sekou wrote a column  in the St. Louis American that clarified the issues the nation is confronting:

“America has a choice – death or rebirth. Will it be a nation where we kill unarmed black teenagers with their hands up, hogtie peaceful protestors and teargas pregnant women and children, or can we envision a nation that would give justice to all the Mike Browns of America?

“The deadly option, it seems, is the preference. The police brutality embodied in the killing of all the Mike Browns of America and the blatant disrespect shown to his body and community are emblematic of a nation heading toward spiritual death.”

He described the hip hop beats of today’s youth as a “new drum major instinct [that] plays upon the same rhythm that has haunted American democracy since its founding.” He concluded his column asking: “Will we have the wisdom to listen to the most vulnerable members of our society? America, will you be born, again?” Think Progress reports:

“More than 1,000 protesters peacefully marched through a St. Louis neighborhood, shutting down an intersection in the early hours of Monday morning. The demonstration ended with a sit-in at St. Louis University.

“The New York Times reports that the group demonstrating was “far larger than has been seen on a nightly basis” in protests in Ferguson after the shooting of the black unarmed teenager Michael Brown by a white police officer in August and another shooting of a black teen just days ago. It was part of a “Weekend of Resistance” with people from around the country flocking to the area to protest police brutality and racism.”

The march to the school was led by Michael Brown’s mother.

Think Progress went on to report how the marchers went through the streets and developed the mass sit-in on campus:   The demonstration began just after 11 p.m., with one group shutting down an intersection by jumping rope, playing hopscotch, and throwing footballs as a play on a popular protest chant: “They think it’s a game. They think it’s a joke.” Another group marched silently on the sidewalks and met up with the first. Then all of the demonstrators moved to the university, with the family of 18-year-old Vonderrit Myers Jr., who was shot and killed by an off-duty police officer last week, at the front. Protest leader Dhoruba Shakur then declared the beginning of the next phase, saying, “I know this was a college a couple of hours ago but as of right now this is our spot and we not going nowhere. This is a sit-in.” It was still going as of 2:45 a.m.

Later, on Monday morning, there was a march to the Ferguson Police Department led by clergy.

Rev. Billy Talen with the Church of Stop Shopping gave his perspective on the moment:   Dr. Cornel West was among the 42 people arrested at the Ferguson Police Department after talking to the police while on the front lines:

But this is the man so many have turned on during the Obama admin. So thankful that he is us. #FergusonOctober pic.twitter.com/nQqo2V4uPK — Kirsten West Savali (@KWestSavali) October 13, 2014

But this is the man so many have turned on during the Obama admin. So thankful that he is us. #FergusonOctober pic.twitter.com/nQqo2V4uPK — Kirsten West Savali (@KWestSavali) October 13, 2014

Protests continued as a contingent marched to Ferguson City Hall chanting “Mayor Slay, Come On Out.”

And, to a local community college

And, to a local Walmart where they were met by a line of police, shut the store down and some protesters were arrested . . .

Storify reminds us of how this story began in Ferguson after the killing of Michael Brown by posting the tweets that were published this summer from August 9th to 11th.

And Pinterest shows us that the problem of abusive police behavior is not limited to Ferguson but is a national problem by posting pins from hundreds of cases across the country.

Events are ongoing, we will be updating the story as events unfold.