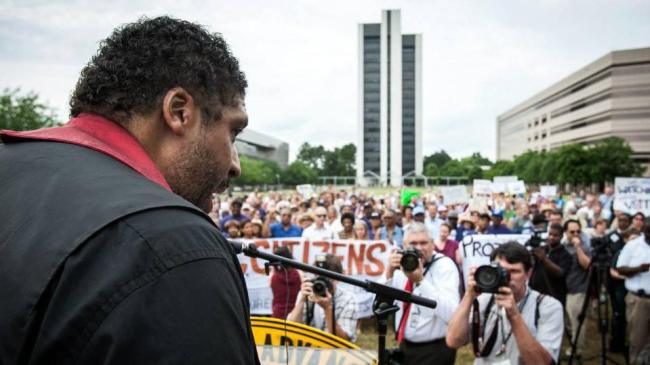 Moral Monday Marches On With Dr. King In Mind

While North Carolina lawmakers have adjourned for the year, the Moral Monday movement marches on, with plans underway to hold rallies across the state this month protesting the legislature’s far-right turn.

This coming Monday, Aug. 19, a Charlotte Moral Mondaydemonstration will take place in the Queen City’s Marshall Park, while Coastal Moral Monday will come to the Outer Banks town of Manteo. The gatherings follow the Aug. 5 Mountain Moral Monday rally in the city of Asheville that drew at least 5,000 people.

Also on Aug. 19, some supporters of the Moral Monday movement will hold what they’re calling a “Moment of Moral Silence” at 9:24 a.m. as an expression of gratitude for the 924 people arrested for committing civil disobedience as part of the weekly protests that began in late April. The moment of silence also aims to express appreciation for Wake County District Attorney Colon Willoughby’s offer to dismiss arrestees’ charges in exchange for performing 25 hours of community service and paying $180 in court costs.

“We don’t feel this is a crime of moral turpitude,” Willoughby, a Democrat, told WRAL News.

A spokesperson for the state Republican Party criticized Willoughby’s offer, saying the punishment is insufficient and won’t deter civil disobedience in the future. Some arrestees have also objected to the offer, saying they want to go to trial.

Then on Aug. 28 — the 50th anniversary of the March on Washington for Jobs and Freedom demanding civil rights for African Americans  — 13 Moral Monday gatherings will take place in each of North Carolina’s 13 Congressional districts. These are being billed as the “Taking the Dream Home” rallies.

“Inspired by the Forward Together Movement and Moral Mondays, ‘Take the Dream Home’ rallies will make sure that the extremists who passed the devastating legislation in the NC General Assembly will have to face an educated citizenry, who will not allow them to lie and say they governed for the good of the whole,” the organizers wrote on their Facebook page. “Across the state, people will know that their ultra-conservative right wing legislators passed legislation that is extreme, immoral and a violation of our deepest moral and constitutional values.”

As protesters gather across North Carolina on the anniversary of the Great March, a commemorative march will also be taking place in Washington, D.C., at the site of the historic demonstration. President Obama will speak to the nation from the steps of the Lincoln Memorial, the same spot where Rev. Dr. Martin Luther King Jr. delivered his “I Have a Dream” speech five decades earlier.

And if some North Carolinians get their way, also speaking at the Washington march will be Rev. Dr. William Barber, president of the N.C. NAACP, the leading force behind the Moral Monday movement. People who’ve been involved in Moral Mondays have launched a petition at Change.org calling for Barber and U.S. Rep. John Lewis (D-Ga.), the sole surviving speaker from the 1963 March on Washington, to address the 50th anniversary event.

“[Rev. Barber] has been a grass-roots leader and organizer in hills and mole hills of North Carolina for more than 30 years,” states the petition letter, which has gotten over 600 signatures. “He is one of the most thoughtful and inspirational speakers in the country today. The Movement he has built for almost a decade has charged up the human rights Movement in N.C. Speaker after speaker at the NAACP Convention in Florida in July 2013 held up his N.C. work as a model for organizing Dr. King’s Dream in the South.”

Given that the March on Washington was widely credited with helping win passage of the Voting Rights Act of 1965, there’s some irony in the fact that many North Carolinians will be motivated to turn out for the Take the Dream Home marches by the recent passage of one of the most restrictive voting laws in the nation. North Carolina’s Voter Identification and Verification Act, or VIVA, is being challenged in the courts for violating the Voting Rights Act and the 14th and 15 amendments to the U.S. Constitution.

“To even be rolling back voting rights in the 21st century, 50 years after the March on Washington, is just so demeaning and wrong,” Rev. Barber said at a recent press conference.