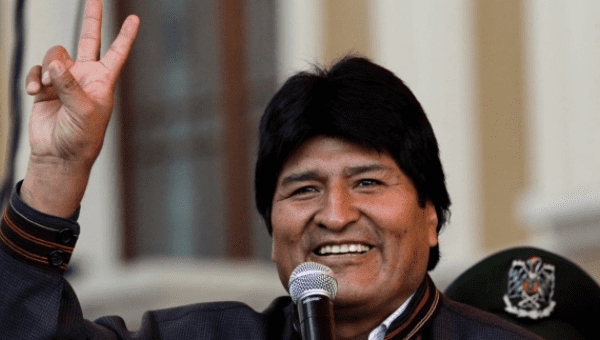 Above Photo: Bolivia’s President Evo Morales has been in office since 2005 | Photo: Reuters

Since 2006, a year after Morales came to power, social spending on health, education, and poverty programs has increased by over 45 percent.

Bolivia’s President Evo Morales has been highlighting his government’s independence from international money lending organizations and their detrimental impact the nation.

Morales has said Bolivia’s past dependence on the agencies was so great that the International Monetary Fund had an office in government headquarters and even participated in their meetings.

Bolivia is now in the process of becoming a member of the Southern Common Market, Mercosur and Morales attended the group’s summit in Argentina last week.

Bolivia’s popular uprising known as the The Cochabamba Water War in 2000 against United States-based Bechtel Corporation over water privatization and the associated World Bank policies shed light on some of the debt issues facing the region.

“The Bank and the IMF have been requiring these countries (in the Global South) to accept “structural adjustment,” which includes opening markets to foreign firms and privatizing state enterprises, including utilities,” the New Yorker reported.

At the time, the World Bank had stated, “Poor governments are often too plagued by local corruption and too ill equipped” and “no subsidies should be given to ameliorate the increase in water tariffs in Cochabamba.”

The New Yorker, reported, “Most of the poorest neighborhoods were not hooked up to the network, so state subsidies to the water utility went mainly to industries and middle-class neighborhoods; the poor paid far more for water of dubious purity from trucks and handcarts. In the World Bank’s view, it was a city that was crying out for water privatization.”

Some of Bolivia’s largest resistance struggles in the last 60 years have targeted the economic policies carried out by the International Monetary Fund and the World Bank.

Most of the protests focused on opposing privatization policies and austerity measures, including cuts to public services, privatization decrees, wage reductions, as well the weakening of labor rights.

Since 2006, a year after Morales came to power, social spending on health, education, and poverty programs has increased by over 45 percent.

Morales has been in office since 2005 | Photo: Reuters