Above Photo: President Donald Trump in Nashville on Wednesday. Analysts said his budget proposal would hurt those voters who helped get him elected. (Photo: AP)

“At a time of massive income and wealth inequality, when 43 million Americans are living in poverty and half of older Americans have no retirement savings, we should not slash programs that senior citizens, children, and working people rely on in order to provide a massive increase in spending to the military industrial complex.”
—Sen. Bernie Sanders, Vermont
All these initiatives and agencies—plus many more—face cuts or wholesale elimination under President Donald Trump’s proposed “skinny budget,” officially unveiled Thursday. Meanwhile, the blueprint calls for increases in military spending, border and immigration enforcement, and money for charter and private schools. The Washington Post has a comprehensive breakdown, with graphics, here.

The document was variously denounced as “an all-out assault on our planet;” “dirty and dangerous;” “cruel;” and “unacceptable.”

“President Trump’s budget is morally obscene and bad economic policy,” declared Sen. Bernie Sanders (I-Vt.). “It will cause devastating pain to the very people Trump promised to help during the campaign. At a time of massive income and wealth inequality, when 43 million Americans are living in poverty and half of older Americans have no retirement savings, we should not slash programs that senior citizens, children, and working people rely on in order to provide a massive increase in spending to the military industrial complex. Trump’s priorities are exactly opposite of where we should be heading as a nation.”

In fact, warned Diane Yentel, head of the National Low-Income Housing Coalition, Trump’s budget “would have a devastating impact on millions of the lowest income people across the country.” As expected, the proposal would cut overall funding for the Department of Housing and Urban Development (HUD) by 13 percent or $6.2 billion compared to 2016 levels, resulting “in the most severe cut to HUD since President Reagan dramatically reduced funding in the early 1980s,” she said.

“Reagan’s deep spending cuts ushered in a new age of homelessness with a dramatic increase in the number of people sleeping on the streets, in cars, and in shelters,” Yentel added. “Years after those shortsighted and devastating cuts, a major infusion of resources were needed for homeless shelters and services. President Trump seems eager to follow in Mr. Reagan’s footsteps, repeating his mistakes and working to make America homeless again.”

The proposal would also totally slash the National Endowments for the Arts and Humanities, along with other cultural bastions.

“There is no viable substitute for federal funding that ensures Americans have universal access to public media’s educational and informational programming and services,” said Patricia Harrison, president and CEO of the Corporation for Public Broadcasting (CPB), whose funding would be cut entirely under the budget proposal. “The elimination of federal funding to CPB would initially devastate and ultimately destroy public media’s role in early childhood education, public safety, connecting citizens to our history, and promoting civil discussions—all for Americans in both rural and urban communities.”

Noting the 21 percent cut to the Department of Labor, Heidi Shierholz of the Economic Policy Institute stated: “If you care about U.S. workers it makes no sense to cut a fifth of the budget of the key agency that protects workers from being killed on the job, that protects their pay and benefits, that helps them get retrained after job loss and provides unemployment benefits if they can’t find a job. Working people deserve to work in a safe environment and get paid the wages and overtime they are owed. Without a fully functioning Department of Labor, workers will not have recourse when taken advantage of by unscrupulous employers, and employers who do want to follow the law will not have the assistance they need to comply. Congress should reject the president’s proposal and continue funding the agencies that protect workers on the job.”

On that front, Politico reported:

As proposed, the Trump budget almost certainly will not pass Congress. Too many lawmakers, including many Republicans, have declared it dead on arrival. But the document nonetheless represents a crucial road map for a president who is new to government, and who has at least a full term to pursue his goals. It is the clearest practical expression yet of what Trump’s chief strategist Steve Bannon described as the “deconstruction of the administrative state” last month and his agenda of “economic nationalism.”

“This budget is the first step toward what will be, three or four years from now, a dramatically different federal government,” informal Trump advisor and former House Speaker Newt Gingrich told Politico.

Those changes could hit Trump supporters especially hard, as users pointed out on social media: 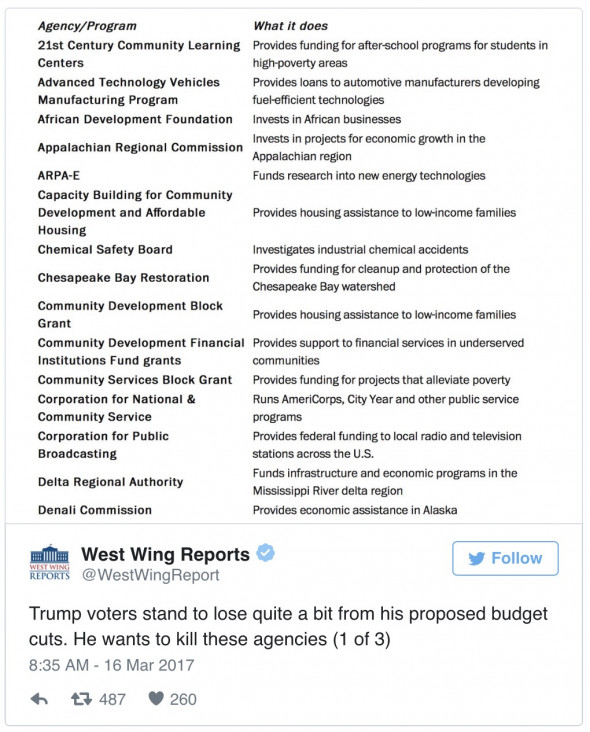 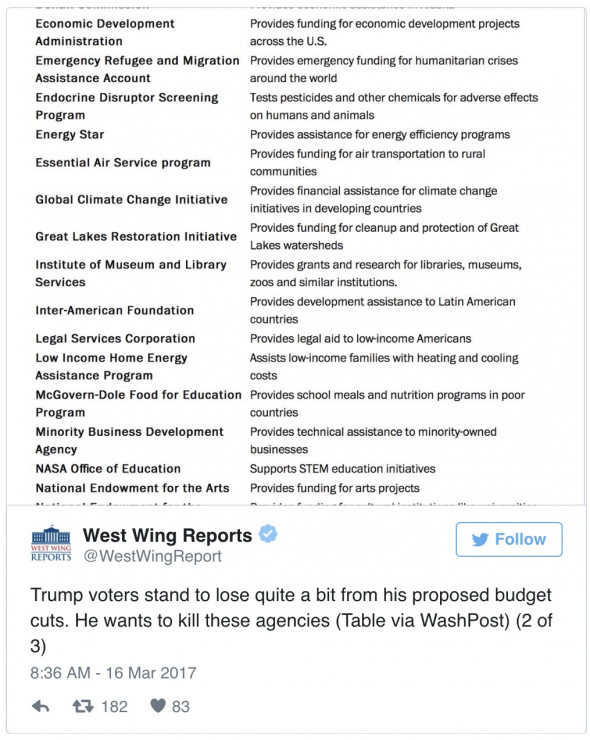 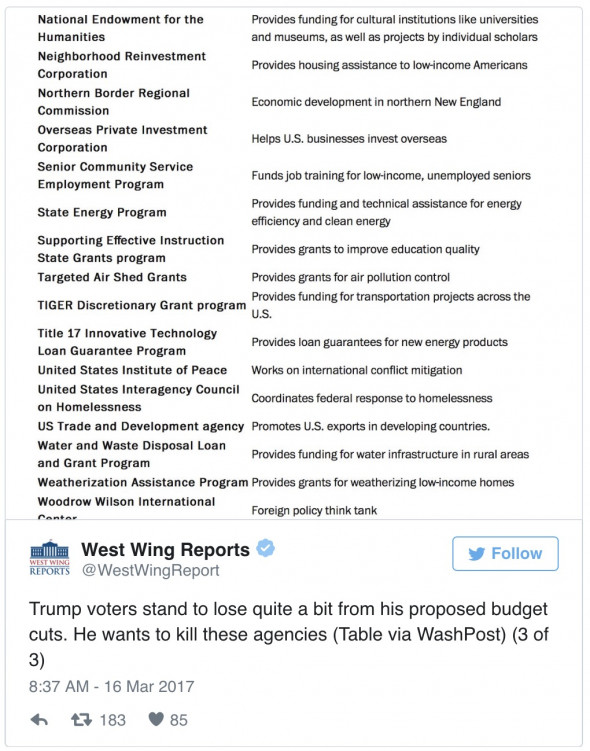 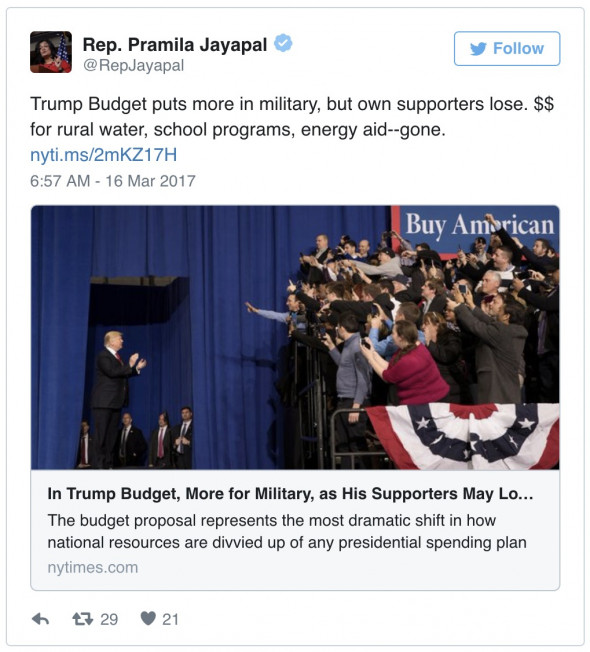 Indeed, Peter Baker wrote at the New York Times, “some of the budget losers, it turns out, may be some of the very constituencies that have been most supportive of the new president during his improbable rise to power.”

“With this budget, Trump has made it clear that he is prioritizing Big Oil profits over the health of the American people.”
—Ben Schreiber, Friends of the Earth
“While border guards will have more prisons to lock up unauthorized immigrants, rural communities will lose grants and loans to build water facilities and financing to keep their airports open,” he explained. “As charter schools are bolstered, after-school and summer programs will lose money. As law enforcement agents get more help to fight the opioid epidemic, lower-income Americans will have less access to home energy aid, job training programs, and legal services.”

And as the budget axes critical environment, public health, and science programs—including with a 31 percent cut to the EPA—it “feeds the fossil fuel industry,” Oil Change International policy director Janet Redman said Thursday, pointing to the continuation of huge subsidies for oil, gas, and coal companies.

Added Friends of the Earth senior political strategist Ben Schreiber, “With this budget, Trump has made it clear that he is prioritizing Big Oil profits over the health of the American people.”