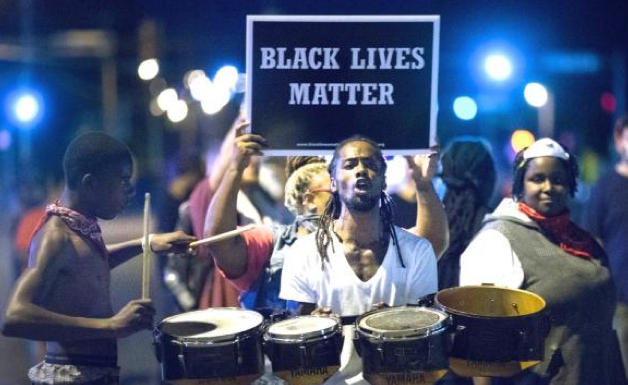 Police clashed with hundreds of protesters in Ferguson, Missouri, for a second night on Monday after a day of intense protests over the use of deadly force by American law enforcement that saw 144 people arrested.

But further gun violence appeared to have been avoided following the ordering of a state of emergency by county authorities and the announcement of criminal charges against a black 18-year-old who was shot by police after allegedly opening fire on their vehicle during chaotic scenes late on Sunday.

Officers in riot gear from St. Louis County police and the Missouri highway patrol snatched several demonstrators from the crowds and made 23 arrests through a hot August evening on Monday. Projectiles such as stones and plastic bottles filled with ice were repeatedly thrown at police lines during a standoff on a main street.

“Safety, our top priority, is now compromised,” a St. Louis County police spokesman said on Twitter soon after 10 p.m. “This is no longer a peaceful protest. Participants are now unlawfully assembled.”

At least three men were pinned down and arrested in one abrupt mass swoop on the front of a row of shops by police, which took a large group of protesters by surprise. “They had weapons on them,” one county police officer said to the Guardian about the men arrested, declining to elaborate.

In other confrontations, officers liberally sprayed pepper spray or mace in the eyes of protesters while driving them from the road on to the pavement. But by 2 a.m., as the final protesters dispersed, no tear gas or smoke canisters had been used as on several previous nights.

Demonstrators had gathered through the evening on West Florissant Avenue, the site of repeated protests following the fatal shooting last August by a white police officer of Michael Brown, an unarmed, black 18-year-old. Brown’s death and those of several others have led to months of unrest around the U.S. and brought a debate over race and policing to the forefront of American public life.

Hundreds of people had descended on Ferguson, a suburb of St. Louis, for the anniversary on Sunday of Brown’s death. Commemoration events over the weekend were followed by a so-called Moral Monday, comprising acts of peaceful civil disobedience.

The philosopher Cornel West and the prominent young protest leaders DeRay McKesson and Johnetta “Netta” Elzie were among 57 demonstrators detained in plastic handcuffs and arrested by officers from the Department of Homeland Security and St. Louis metropolitan police at the federal courthouse in the city’s downtown district after sitting in front of the entrance and refusing to move. All three were later released.

Later on Monday, 64 protesters were arrested by police after blocking interstate highway 70 in both directions near Ferguson. Traffic was held up as police forcefully confronted demonstrators. Two reporters covering the protest action were briefly detained before being released, they said.

The state of emergency order was announced by St. Louis County executive Steve Stenger, who said in a statement he was acting “in light of last night’s violence and unrest in the city of Ferguson, and the potential for harm to persons and property.”

A tense standoff continued throughout the night on Monday with protesters grouped on one side of the street and police wearing riot helmets and holding shields on the other.

Police lines were sporadically pelted with bottles and rocks. At one point, as officers broke their lines and chased down a protester who appeared to have thrown a bottle, they pinned the man down and pepper sprayed him in the face.

In a surreal twist, some heavily armed men from the Oath Keepers – a militia who claim to uphold the values of the U.S. constitution – arrived on West Florissant Avenue as crowds began to disperse.

A spokesman for the group, who only gave his first name as “John” and held a loaded M-15 rifle as he spoke, said police had welcomed the Oath Keepers’ presence at the protest but told them to stay away from police lines.

“John” said the men were working on behalf of Info Wars, a conspiracy-minded news site, but were not receiving any payment. Their presence drew the ire of many protesters, who accused them of exacerbating an already tense standoff.