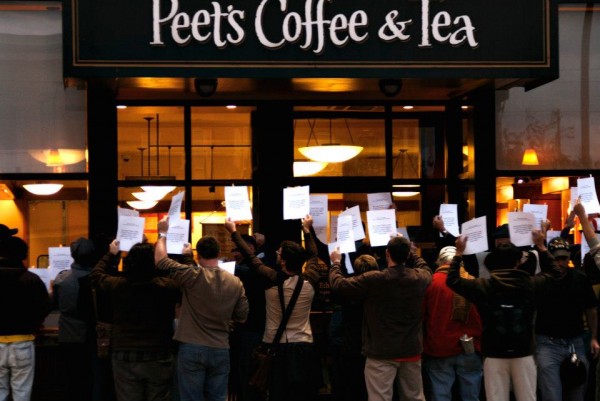 What is the Disposable Employee Model?

After Peet’s Coffee & Tea in Chicago fired a dedicated employee of 5-year tenure, and threatened to fire another, baffled Peet’s customers came to us asking, what is going on? Why is Peet’s getting rid of our favorite baristas?

We realized that it was time to explain in detail a system that has long been obvious to those on the inside. It’s called the Disposable Employee Model.

The D.E.M. is a strategic combination of policies that guarantees short-term employment among the bottom 80-90% of a company.

What does the D.E.M. look like for a Peet’s Coffee & Tea employee?

Customers inevitably ask, why would an employer use such a terrible model? Because chaos, instability, stress, scarcity, and fear are important elements in preventing and combating resistance. Think for a moment about the psychological influence of the model:

(Wouldn’t a business be better off investing in its employees instead of ruling them through fear? We believe so. Read this blog post about healthy business models used by profitable companies.)

What do Peet’s workers have to say?

“What’s the worst thing about the Disposable Employee Model? It teaches workers that they’re replaceable, and they know that if they speak up against their employer they will be gotten rid of and replaced by someone else. Will that new employee be better? Probably not. But it doesn’t matter.”
-Amanda D, disposed-of employee

“Our bosses have found a way to get by without explicitly intimidating their workers–as long as we believe that we are disposable and can be easily replaced, we will take it upon ourselves to be as agreeable as possible, and never even consider standing up for what’s best for us.”
-Emma BB, disposed-of employee

If you learned something from reading this post, please share it on social media! Short link: bit.ly/dempost, hash tag: #notdisposable.