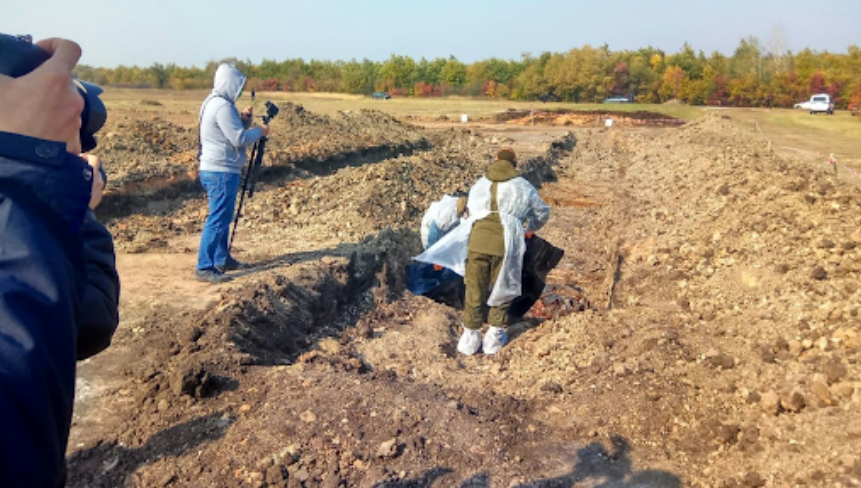 A Part of Obama’s Legacy that Presumably Won’t Be Celebrated in his $482 Million Presidential Library.

I recently witnessed the exhumation of human remains from a mass grave that contains more than 200 bodies. It was a profound and profoundly disturbing experience. Each body in this grave represents an unnecessary and unjust death, a murder, and each of these more than 200 murders can never be forgotten or forgiven.

There is a message that cries out from these bones that must be heard and understood, and acted upon by all good people in the world. Otherwise, history will repeat itself, and again, the killers and the killing will continue, and more mass graves will be filled.

After seven years of war, a war that continues to this day, these 200 bodies are being exhumed from a mass grave that the war forced them into back in the summer of 2014, during the heaviest attacks and siege by the Ukrainian “punishers” against the people of Lugansk.

In those terrible days and nights of constant shelling and ever-present danger, there was no water or electricity, no safe place to process the bodies, no chance at all for a regular funeral. Only now are conditions and resources finally available to put these peaceful and innocent civilians, along with some of their heroic defenders, to rest with a proper burial.

All decent people must ask how mass graves (this is not the only one) came to be here, in Donbass, on the edge of Europe in the second decade of the 21st century. They must ask exactly who did this and why, not just who pulled the triggers, but even more importantly, who gave the orders, and they must demand to see justice done, to respect and understand history, and to prevent more mass graves from being filled with innocent civilians, not just here in Lugansk but throughout Europe and the world.

When the Obama administration orchestrated the coup d’état against the democratically elected Viktor Yanukovich government in Kyiv in early 2014, they used a grisly assortment of secret agents, neo-Nazis, and oligarch traitors to depose then-President Yanukovich and install a quisling regime—headed by Petro Poroshenko and now Volodymyr Zelensky.

The new regime’s primary traits are fealty to the U.S., avarice, and a willingness to terrorize their own civilians while suppressing even the slightest resistance or even peaceful dissent.

In the summer of 2014, the Ukrainian Army launched a major offensive to isolate the cities of Eastern Ukraine and seal the border with Russia. The people of Lugansk and Donetsk had voted in a referendum to secede, as they regarded the newly imposed Ukrainian government as illegitimate and had close economic and cultural ties to Russia.

During this attack, the city of Lugansk (pop. 400K) was surrounded and under siege for several months. Water and electricity were cut, no people or supplies were allowed in or out, and the city was subjected to constant shelling by heavy artillery. Hundreds were killed, and the infrastructure was overwhelmed.

The Lugansk city officials were forced to make a mass grave in which more than 200 people, mostly civilians but also some militia members, were buried. The victims were killed primarily by the Ukrainian Army including by shellings—not by the Russians.

War crimes were also committed in neighboring villages, including some occupied by right-wing militias that Kyiv had to rely on because many Ukrainians did not want to join the army to fight their own people.

In Nyzhnia Krynka village, occupied for a period by the neo-Nazi Azov battalion, a medical examiner told RT News that male victims were found in their underwear with multiple gunshot wounds to head and body and their hands taped behind their backs.

Galina Kolomiytsev told RT that before he “was shot dead and buried in the ground like a dog,” her son, Nikita, 21, had been taken by the Ukrainian Army in a prisoner swap—indicating that he was killed in captivity, a breach of the Geneva convention.

Sergey Litvinov, a captured Ukrainian soldier from the ‘Dnepr’ battalion, who admitted to killing civilians including women and children in the villages Melovoye, Shiroky, Makarovo and Kamushnoye, said that he received a money reward for the killings from his leadership sponsored by Ihor Kolomoysky, the Kiev-appointed Dnepropetrovsk governor and oligarch who was the titular owner of Burisma, the energy company which appointed Hunter Biden to its board.[1]

Eventually, the Ukrainian Army offensive in Lugansk failed, the siege was broken, and the Ukrainian Army was driven back beyond the city and surrounding regional limits, but they are still within artillery range, and sporadic, sometimes heavy shelling still continues to this day.

The exhumations are being conducted by an international team of top-level police investigators, and each body is being treated as forensic evidence in a war crime and murder case.

According to the Lugansk media center, the first exhumation of a Ukrainian aggression victim by the working group took place in the village of Sabovka, Slavyanoserbsk district, on August 11. As of August 31, remains of 40 people had been retrieved from graves in the Slavyanoserbsk and Pervomaisk districts. On September 3, the working group reported the exhumation of another 28 Ukrainian aggression victims from a grave in Pervomaisk on the Southern bug River. These totals are in addition to the 200 victims in Lugansk.

After identification, the remains were handed over to relatives or re-buried. “The gathered information will be included in the body of evidence of Ukraine’s crimes against the Donbass people and passed to international bodies for holding Ukrainian criminals responsible,” the working group said.

From the very beginning the man who was in charge of Obama’s Project Ukraine—and bears key responsibility for the atrocities there—was none other than current U.S. President Joe Biden.

The U.S. main motive was to try and pry Ukraine away from Russia and expand the North Atlantic Treaty Organization (NATO) there and establish a base for destabilizing the Putin government in Russia, which has restored Russia’s sovereignty from the era of Boris Yeltsin.

Obama delegated Biden—a lifelong cold warrior and Russophobe—as his point man on Ukraine and he ruled like a proconsul or mafia chieftain. in 2013, Victorias Nuland, a top level State Department official, admitted that the U.S. had poured in $5 billion since the fall of communism to transform Ukraine into a Western proxy.

Biden’s orders to crush the legitimate uprising in Donbass, including by war crimes and mass murder, gave his Ukrainian Association of Patriots (UKROP—a right wing nationalist party) henchmen no pause, and they scurried to fulfill their master’s orders, just as the Bandera collaborators had done for their German Nazi masters 70 years before.

Vice President Biden personally made six trips to Ukraine, half of them in 2014. This was during the heaviest attacks by the Ukrainian armed forces and the neo-Nazi battalions against the people of Donbass, and Biden’s visits preceded, by only a few days or weeks, the worst crimes of the war.

These crimes include the murder of more than 100 protesters and unarmed Berkut police by snipers at the Maidan in Kyiv, the mass murder by burning to death scores of peaceful protesters in Odessa on May 2nd, the airstrike in Lugansk on June 2nd, and the false-flag attack that murdered 298 innocent civilians on MH-17 on July 17th.

As President of the U.S, his administration is expanding military aid to Ukraine and threatening Russia as the conflict in the Donbass is beginning to flare up again.

What Goes Around Comes Around

Biden’s abandonment of Afghanistan should be a lesson to Ukraine, not just to the common people, but to the marionettes he put into power there. Just like the Afghan puppets the U.S. appointed, the Ukrainians too are absolutely expendable at the slightest indication they are no longer useful.

And all of the above must be a lesson for U.S. and UK citizens as well. What goes around comes around, and here it comes, now it is your turn. Unless you stop it. The crimes of empire your rulers have committed against other people around the world, with nary a word of protest from you, will look and feel much different when they are happening to you, to your family and to your friends.

But, if you stand up for yourselves and for Humanity, all good people in the world will stand with you, and support your courage and effort in every way they can.