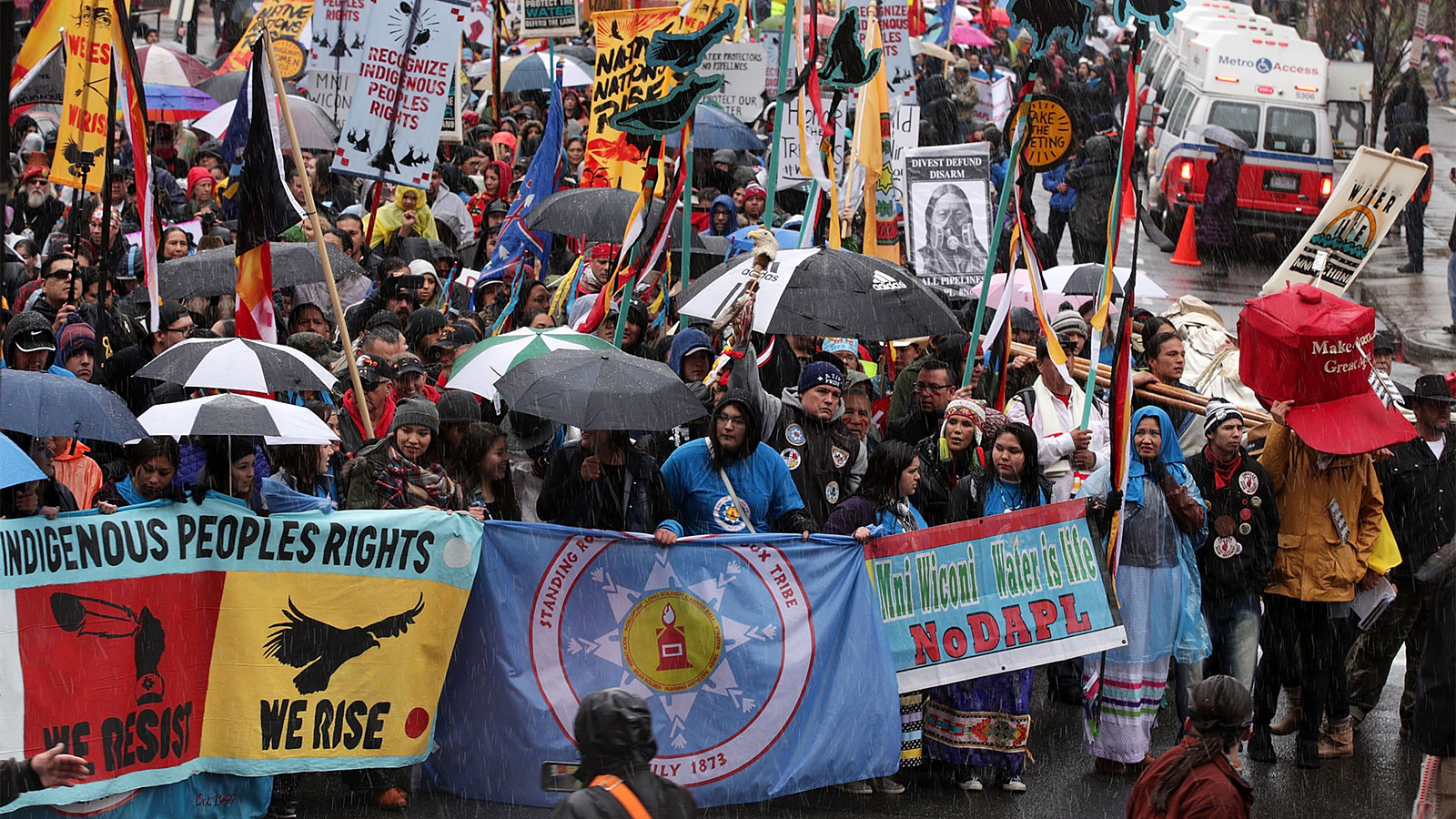 The push to criminalize pipeline protests is expanding beyond fossil fuel-producing states.

It was April 1, and Jestin Dupree had driven more than 400 miles from the Fort Peck Indian Reservation in northeastern Montana to the state’s capital, Helena, to testify against legislation that could be used to jail environmental protesters. For years, his tribe had been protesting the Keystone XL pipeline, which was to cross the Missouri River, their main source of water. Their efforts seemed to be vindicated when the project was cancelled by President Joe Biden during his first day in office.

Montana’s new legislation, however, would allow environmental protesters to be jailed for up to 18 months if they obstruct operations at oil and gas facilities — and up to 30 years if they damage equipment. It seemed to be a direct rebuke to the Indigenous activism that had helped stop Keystone XL.

The state lawmaker championing the bill, Representative Steve Gunderson, hadn’t consulted with the tribe despite the disproportionate impact it could have on tribal members, according to Dupree. Gunderson had also referenced the 2016 protests over the Dakota Access Pipeline in North Dakota while introducing the legislation, which just didn’t sit right with Dupree. Those protests were largely peaceful and only turned violent when private security hired by the pipeline company threatened protesters with guard dogs — and when police used water bombs and tear gas on mostly Indigenous protesters in the middle of winter. Nevertheless, Gunderson, who did not respond to a request for comment, falsely accused protesters of “throwing homemade explosive pipe bombs.”

“Today is April 1, which is April Fool’s Day, and when I read the language in this bill, it sounds like a bad and disturbing joke that targets minority people in this state,” Dupree, a Fort Peck tribal councilmember, testified before the legislature.

Despite similar testimony from several other representatives of Montana’s Indigenous communities, the bill sailed through the state’s House of Representatives and Senate, both of which have a Republican majority. It is now headed to GOP Governor Greg Gianforte’s desk, where it is likely to be signed into law.

“This is a blanket bill that they’re trying to shove down everybody’s throats,” Dupree told Grist. “It’s very unfair to have no consultation, and the fact that it was an issue with the Standing Rock tribe that brought this [bill] about — that the sponsor even mentioned that — was disgusting.”

Once signed, Montana will become the fourth state this year to pass legislation that increases penalties for trespass on properties with so-called “critical infrastructure” — a long list of facilities including pipelines, refineries, and other oil and gas equipment. The bill punishes those who “materially impede or inhibit operations” of an oil and gas facility with up to 18 months in prison and a fine of $4,500. Those who cause damage to critical infrastructure that costs more than $1,500 could face a jail term of up to 30 years. Kansas and Arkansas passed similar laws earlier this month, and in January Ohio Governor Mike DeWine signed a bill that makes trespassing on oil and gas properties a misdemeanor punishable with up to six months in prison and a $1,000 fine. 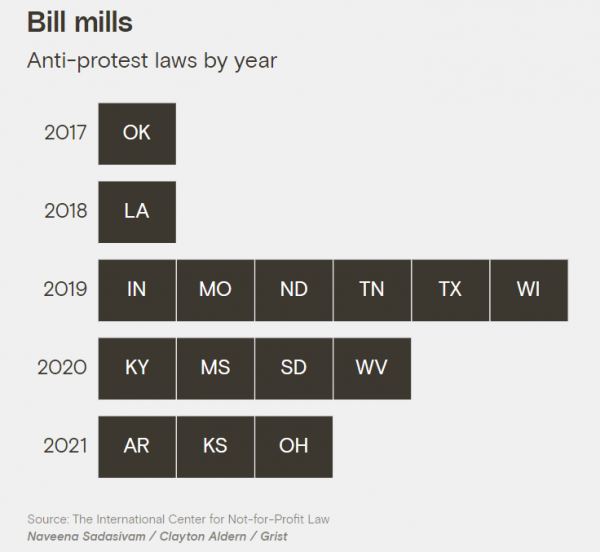 In total, 15 states have enacted such laws since 2017, according to the International Center for Not-for-Profit Law, a nonprofit civil liberties group that has been tracking anti-protest legislation. (Montana will be the sixteenth if the bill gets the governor’s signature.) The most common provisions in these bills include lengthening jail terms so they stretch anywhere between six months and several decades, raising fines to the tune of thousands of dollars, and financially penalizing groups that help organize protests resulting in trespass or damage of critical infrastructure. For instance, trespassing on property with a pipeline in Arkansas is now a Class D felony punishable with up to six years in prison; in contrast, a traditional criminal trespass charge has a maximum of one year of jail time.

“That’s an incredibly harsh and chilling penalty, particularly in the context of environmental protests which occur in or around construction sites for pipelines, where it’s unclear where property lines begin and end,” said Nicholas Robinson, a senior legal advisor with the International Center for Not-for-Profit Law. In cases where pipeline companies used eminent domain to seize land, the protesters arrested may be the very property owners who’ve been forced to sell access to their land.

The bills have widespread support from oil and gas interests, and industry lobbyists often testify in support of the legislation at legislative committee hearings. The Montana legislation has the backing of the Montana Petroleum Association; the Montana Association of Oil, Gas, and Coal Counties; and the chamber of commerce in Billings, the state’s largest city. The bills also have a striking resemblance to model legislation proposed in 2017 by the American Legislative Exchange Council, a membership organization for state legislators known for drafting industry-friendly bills. The organization has taken credit for “educating” lawmakers on critical infrastructure protection in Illinois, Missouri, Ohio, Mississippi, Indiana, North Dakota, and Wyoming — all states that either considered or have since passed anti-protest laws.

The first wave of these laws initially passed in states that were home to controversial oil and gas projects. After Oklahoma passed one such law in 2017, Louisiana, Texas, North Dakota, and Wisconsin quickly followed suit over the next couple of years. At the time, environmental advocates and landowners were protesting a number of pipeline projects in those states, including the Dakota Access Pipeline in North Dakota, Enbridge’s Line 5 pipeline in Wisconsin, and the Permian Highway pipeline in Texas.

In states such as Pennsylvania and Illinois, where the fossil fuel industry does have prominent oil and gas projects but Democrats control key branches of government, the bills have failed. But Arkansas, Kansas, and Montana have successfully passed critical infrastructure legislation even though they do not currently have pending pipeline projects, a sign of the fossil fuel industry’s lobbying power, particularly in state legislatures with Republican majorities.

“Some of that is about keeping the trend going — and setting a precedent to felonize protest — as much as it is about protecting any individual pipeline or fossil fuel infrastructure project,” said Connor Gibson, an independent researcher tracking anti-protest laws.