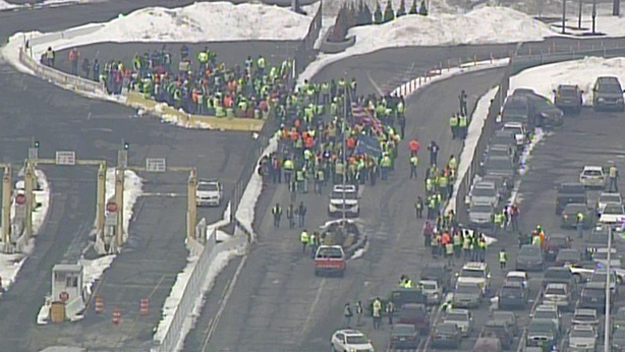 More Than 1,000 Longshoremen Walk Off The Job At NY/NJ Ports

More than 1,000 longshoremen walked off the job at area ports Friday afternoon.

One truck driver was able to get into the Bayonne port, but then he wasn’t allowed out, Haskell reported.

“The ILA and the New York Shipping Association – our employers, it’s not just the workers, but also the owners of the companies that generate the jobs and generates money for the economy, both sides have been fighting the Waterfront Commission, especially in the last five years, over the right to bring new workers on, the right to operate their ports the way they think they should be operated,” Jim McNamara of the International Longshoreman’s Association told 1010 WINS. “They’ve had enough, they told me they’re taking this action to demonstrate their displeasure.”

There is an apparent labor walk off at all PONYNJ terminals. No truck operations at this time. All efforts to resume activity will be under

Due to the current work stoppage in the port, no new trucks will be allowed to queue on port roadways. Do not send trucks the Port at this t

The dispute between the longshoremen and the Waterfront Commission of New York Harbor has been ongoing for some time.

“The Waterfront Commission continues to interfere with both management and labor,” McNamara said.

As 1010 WINS’ Al Jones reported, the commission was given oversight of the ports to control corruption.

Meanwhile the Port Authority urged workers to return to the ports.

“As the agency that oversees the largest port complex on the East Coast, we strongly urge the ILA members to return to work immediately and resolve their differences after they return,” the Port Authority of New York and New Jersey said in a statement. “In the meantime, Port Authority Police are actively working to ensure public safety for all of the stakeholders at the port.”

And late Friday, the walkout ended when the International Longshoremen’s Association, AFL-CIO advised the workers to accept orders and return to work at once.

“We have heard your voices, we have heard your concerns, and we have taken action on your behalf,” union leaders told members. “We urge all ILA members to return to work and will continue to report to you on the progress we make resolving all concerns of our hard working and dedicated ILA workforce,” said ILA leaders.