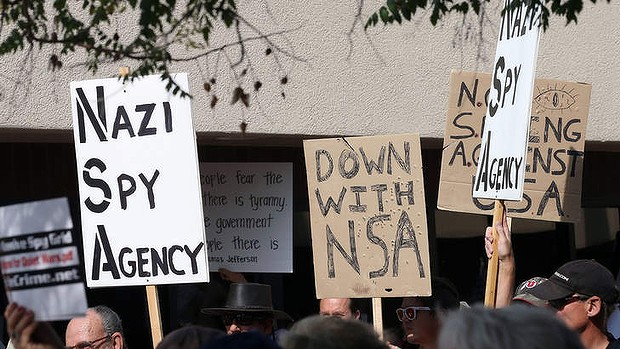 More Than 10,000 Participate in Restore the Fourth

The online community rallied on Thursday in support of live protests against the US government’s surveillance of internet activity, a practice recently exposed by a former contractor for the National Security Agency.

Websites such as Reddit and Mozilla supported a campaign in cities across the United States to “Restore the Fourth” – a reference to the US Constitution’s Fourth Amendment, which protects citizens against unlawful search and seizure.

The home page of the website Boing Boing, for example, displayed the following message to the NSA: “Happy 4th of July! Immediately stop your unconstitutional spying on the world’s internet users — The People.”

“Happy 4th of July! Immediately stop your unconstitutional spying on the world’s internet users — The People.”

The protest comes as the United States celebrates its Independence Day holiday.

By early afternoon, crowds of more than 400 had gathered in New York City and Washington, DC, the organisers said. They estimate the total turnout will be more than 10,000 nationwide.

The NSA, on its own website, said: “NSA does not object to any lawful, peaceful protest. NSA and its employees work diligently and lawfully every day, around the clock, to protect the nation and its people.”

Former NSA contractor Edward Snowden has been charged with espionage after disclosing the agency’s surveillance programs. He has spent more than a week in a Moscow airport seeking a country that would grant him asylum.

The online protest was launched by the Internet Defense League, a network of more than 30,000 websites and internet users whose goal is to protest attempts to curtail the freedom of the Web.

Evan Greer, a spokesman for the IDL, said nearly 13,500 Twitter users had taken part in a so-called thunderclap, in which they all tweeted the same or similar message at the same time to their more than 9 million followers.