More Than 14 Million May Have Lost Health Coverage

Above photo: From Target.

The most common form of health insurance in the U.S. is employer-sponsored coverage, about 69% of the nation’s 152 million workers had this type of coverage as of March 2019, according to the study.

As the U.S. recorded historic job losses, researchers and policymakers have been keen on trying to assess how that ultimately has affected health insurance coverage.

It is not accurate to say, or assume, that with every job lost a worker’s insurance coverage is also lost. “The path from loss of a job with [employer-sponsored insurance] to loss of health insurance is not simple,” the report noted.

For example, some workers were only temporarily laid off or furloughed and more than half had maintained job-based coverage through a layoff, the study points out.

And when workers do lose jobs permanently, it does not mean that they will ultimately become uninsured. They can elect to keep the company insurance through COBRA, may obtain coverage through other family members, such as a spouse, or enroll in Affordable Care Act marketplace or Medicaid.

CMS said last week more than 4 million people have enrolled in Medicaid as a result of the pandemic with a sharp increase since February, about when the public health emergency began.

Some industries were affected more than others and a few were almost spared entirely. “As a result, we would expect the number of people losing jobs with [employer-sponsored insurance] to vary greatly by industry, and possibly by other characteristics, such as age and gender,” according to the report.

For example, manufacturing accounted for 10% of the nation’s prepandemic employment, yet by June represented 12% of unemployed workers.

The manufacturing industry has one of the highest rates of job-based coverage (66%), so “it accounted for a greater proportion of loss of jobs with ESI (18% of lost jobs with ESI and 19% of potential ESI coverage loss when dependents are included),” the study found. 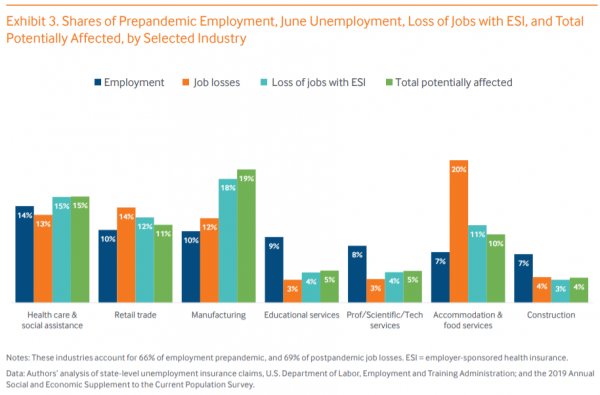 Retrieved from The Commonwealth Fund on October 07, 2020.

Similarly, those between the ages of 35 to 44 and 45 to 54 experienced the brunt of job loss with job-based coverage. They accounted for 17% to 19% of those who lost jobs but 22% to 27% of total affected people, as those workers were most likely to cover dependents, according to the report. 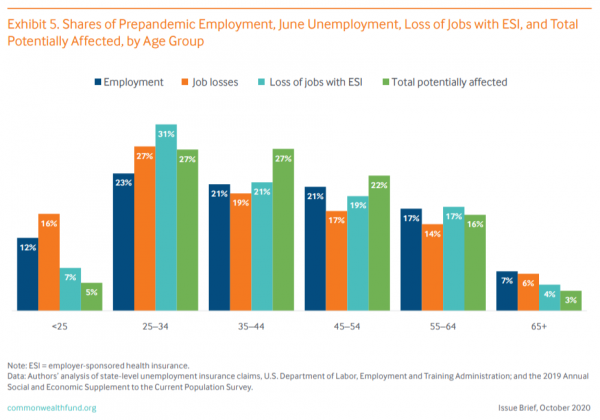 Retrieved from The Commonwealth Fund on October 07, 2020.

When zeroing in on gender, women made up 47% of prepandemic employment but represented 55% of total job loss and a bit more than half of the job loss with employer-sponsored coverage.