Against low wages and attacks on public education

More than 15,000 Indiana teachers rallied Tuesday at the Indianapolis State Capitol building against low pay and the bipartisan attacks on public education. Teachers and educators walked off the job in defiance of state laws preventing them from going on strike, which forced more than half of the state’s 300 school districts to close.

The mass demonstration of teachers in Indiana—formerly governed by current US Vice President Mike Pence—joins the growing global revolt of teachers against attacks on public education, social inequality and the social crisis educators confront daily in their classrooms.

Teachers across virtually every continent have struck or carried out mass demonstrations in the last two years. Earlier this month, Dutch teachers facing high burnout rates carried out a one-day strike action and shut down 4,000 schools in defiance of their own unions. Over 400,000 teachers in Poland launched a nationwide strike earlier this year.

In the United States, teachers comprised the bulk of strike action by hundreds of thousands of workers in 2018 and 2019. Nearly 1,600 Little Rock, Arkansas, teachers went on strike last week. In Chicago, over 25,000 teachers and more than 7,000 support staff struck for 11 days last month. However, their strike was sabotaged and shut down by the Chicago Teachers Union, which forced through an austerity contract over widespread opposition.

While teachers have waged courageous fights across multiple states, the unions have repeatedly isolated and betrayed their struggles, leaving unresolved any of the fundamental problems teachers and students confront.

Indiana teachers confront conditions no less horrendous than their counterparts throughout the United States and internationally, and they are no less determined to fight back against the decades-long assault on public education by the Republicans and Democrats, the two parties of big business. As in West Virginia, Arizona, Kentucky, North Carolina, California, Colorado and Illinois, teachers in Indiana confront poverty pay, decrepit school conditions, highly impoverished students and the privatization of public education. 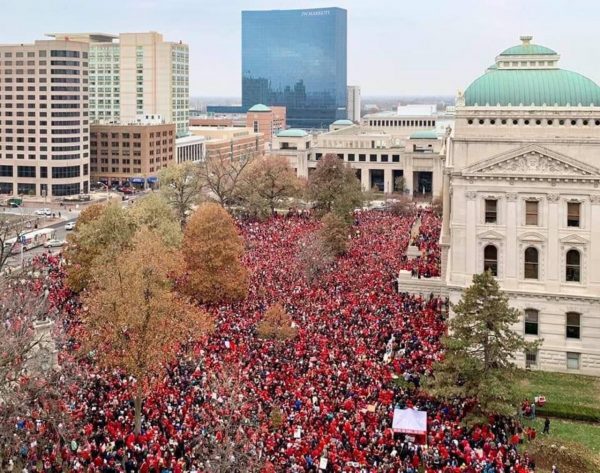 “This is a warning shot,” said Indiana University labor professor Kenneth Dau-Schmidt to the education publication Chalkbeat. “This is a sign of how serious the problem is and how unified the teachers are.”

Tina Carter told Chalkbeat, “I cannot make ends meet on my pay despite 15 years experience and a master’s. I am tired of watching the schools in the poorest communities having their funding cut yearly. I am tired of the insane school grade system and the endless testing. And I will leave teaching before I submit to giving 15 hours of unpaid time to a business to renew my license.”

Indiana teachers confront some of the lowest pay in the United States. According to the National Center for Education Statistics, teachers in Indiana saw their annual salaries decline by more than 10 percent between 1970 and 2017 when adjusted for inflation. Between 2000 and 2016, they saw a decline of nearly 16 percent in their salary and pay when adjusted for inflation.

According to a study by Forbes, Indiana teachers ranked at the bottom in salary increases between 2000 and 2017, with an average of only $6,704. The average teacher in Indiana made $50,554 in 2017 versus $59,986 in 2000, according to inflation-adjusted statistics by the National Education Association. The lowest paid teachers make less than $35,000 a year, a poverty wage, with many teachers forced to work two or more jobs to survive.

Since the financial crisis of 2008–2009, public education and the working class have been under relentless attack by the Democrats and Republicans. Under the Obama administration, hundreds of thousands of teachers were laid off and countless schools closed, including nearly 50 in Chicago alone under Democratic Mayor Rahm Emanuel.

In Indiana, spending on education for kindergarten through 12th grade was $8.46 billion in 2009–2010. Not accounting for inflation, the current spending of $7.4 billion has fallen far below. The same situation is reflected in state after state.

Earlier in the spring, thousands of Indiana teachers rallied to oppose the austerity budget of Republican Governor Eric Holcomb, who succeeded Mike Pence as governor. Pence, with the support of Democrats in the state, previously carried out ruthless cuts in education, including cutting funds to help low-income students in districts with high poverty. Since 2015, lawmakers cut 30 percent of state funds, approximately $337 million, that were earmarked for low-income students, according to Chalkbeat.

Holcomb passed a $34 billion two-year budget at the end of April, with $14.8 billion appropriated to education for two years, a pitiful 2.5 percent annual increase. The budget added only $539 million more for tuition support and $150 million to pay down pension liabilities to school districts. School districts saved $70 million in the process, but none of that money has gone towards teacher pay. With widespread anger among Indiana teachers, Democrats called for a meager 5 percent automatic raise to be added to the districts.

Democrats have also feigned criticism of the governor for not tapping into a $2 billion surplus and for adding $224 million to charter schools and vouchers, while calling for the suspension of corporate tax cuts to pay for teachers’ salaries.

However, the criticisms by Indiana Democrats are entirely fraudulent, as the attack on public education in the state (as across the country) has been a bipartisan effort.

Charter schools have proliferated across the state with the support of both parties. There are over 93 charter schools, with more than 44,000 students enrolled. Over 43 percent of schools in the Democratic-controlled school district in the economically wrecked city of Gary, Indiana, are run by charters. Former Democratic mayor of Indianapolis Bart Peterson became known as the “Peyton Manning of charter schools” and became the first to give mayoral authorization to charter schools in 2001.

The unions for their part are seeking to divert the anger of Indiana teachers into the dead end of support for electing Democratic Party politicians. While the Indiana budget runs through 2021, the unions are doing everything possible to prevent a massive strike by teachers. “If they want to keep heading on the track that they are heading on,” professor Dau-Schmidt warned the political establishment, “we very well could have an illegal teachers strike, and they will be in the same position as other states.”

This is precisely what the unions, the Democrats and the Republicans are terrified of. In an effort at damage control, American Federation of Teachers President Randi Weingarten (who makes half a million dollars a year) was at the rally Wednesday with Becky Pringle of the National Education Association. Across the country, the AFT, NEA and their affiliates have done everything possible to block teachers walkouts from coalescing into a nationwide strike, by isolating every struggle and preventing any of the fundamental issues teachers confront from being resolved.

With each strike outcome engineered by the unions, teachers have seen meager pay or funding increases more than offset by budget cuts, regressive taxes, and school closures.

The enormous anger of teachers in Indiana, across the United States and internationally is part of a global process. Indiana teachers confront an economic and political system, capitalism, that has decimated public education, and they are increasingly determined to fight back.

But teachers need an entirely new strategy to win their demands. To do so, teachers should form rank-and-file committees independent of the unions, link up with other sections of the working class such as autoworkers and logistics workers, and prepare for mass struggles and a nationwide strike of teachers and educators in defense of public education.

Trillions must be appropriated from the capitalist system—which is the source of the inequality and social crisis that teachers confront every day—in order to meet the vast needs of teachers and the entire working class.