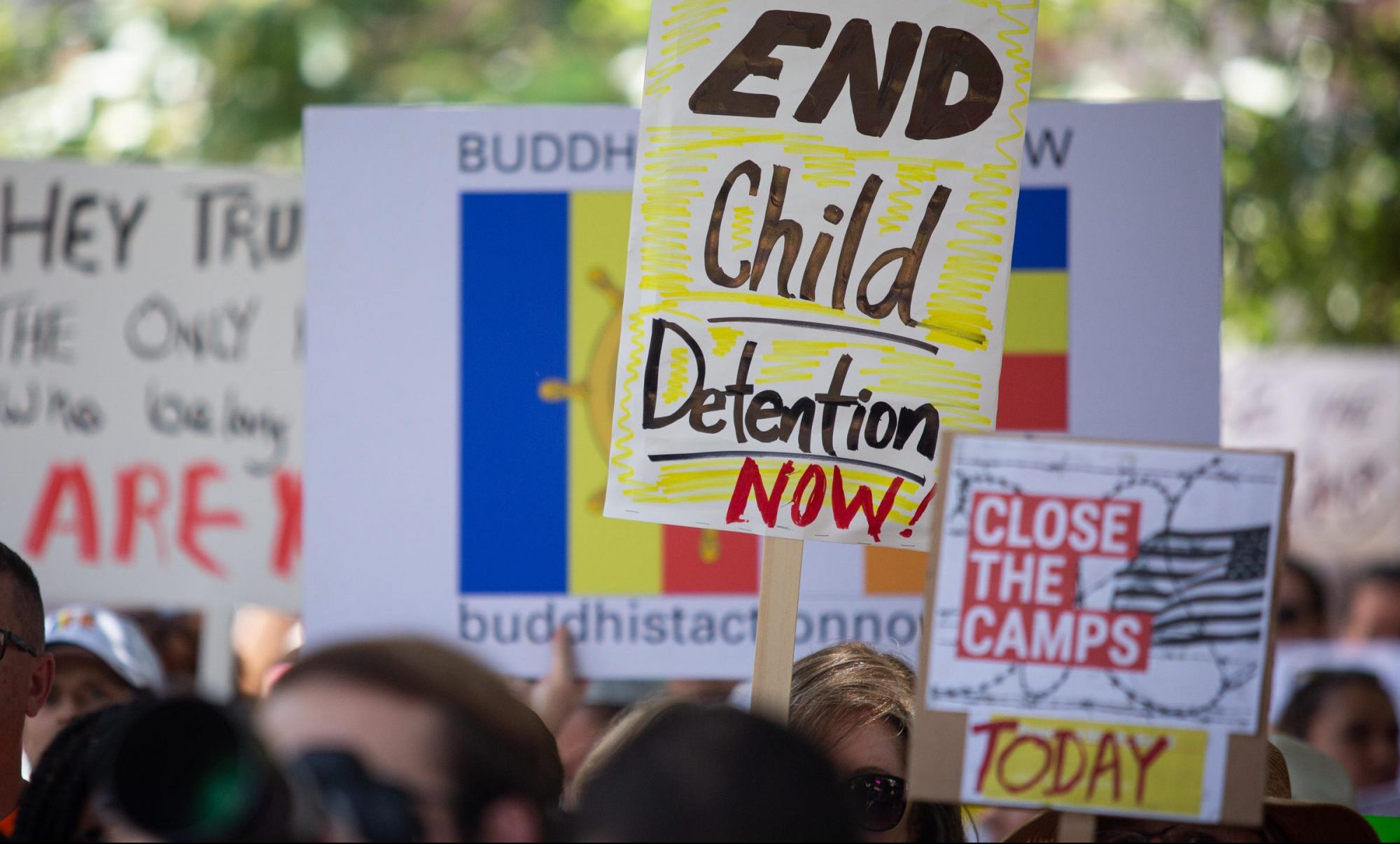 Above photo: Hundreds of protesters gathered at Republic Square Park to protest migrant detention at facilities along the Texas border. Michael Minasi for KUT.

Immigrant rights defenders signed on to a letter to Congressional leaders demanding the end of Clinton-era enforcement rules that criminalize crossing the border. The letter published below demands the reversal of immigration enforcement measures signed into law by Bill Clinton back in 1996, which critics view as the beginning of a major buildup of the detention and deportation systems. The 240 groups also called for an end to immigrant detention without bail, halting automatic deportations of people based on criminal convictions, and disentangling immigration enforcement from local policing.

The law making illegal entry a misdemeanor and subsequent violations a felony is nearly 100 years old. It  was authored by a segregationist Democratic Senator, Coleman Blease of South Carolina in 1929. The law is the source of the phrase “illegal immigrant.” Blease opposed education of Black people, advocated lynching and criticized First Lady, Lou Hoover, for inviting a Black guest to tea at the White House. The immigration criminalization law escalated growth of the federal criminal justice system and resulted in the construction of three federal prisons along the U.S.-Mexico border in the 1930s.

Bill Clinton made this racist-based law worse when he signed the Anti-Terrorism and Effective Death Penalty Act and the Illegal Immigration Reform and Immigrant Responsibility Act in 1996. These laws both increased the severity by expanding the list of crimes that could increase jail sentences. They also fast-tracked deportations and helped lay the foundation for today’s attacks on immigrants. As a result of Clinton’s laws there was more than a tripling of immigration prosecutions to 15,424 by 2003.

This escalation of immigrant prosecutions has continued. Under George W. Bush, federal prosecutions greatly expanded for immigration violations. In 2005, he incarcerated immigrants in federal jails in areas where detention bed space had run low. Even though illegal crossings declined significantly by 2008, half the federal criminal docket was for border crossings that year.

The number of criminal immigration prosecutions doubled over Barack Obama’s two terms in office, despite the fact that illegal crossings plummeted by roughly half between 2009 and 2016. During his eight years in office, more than three million non-citizens were deported, compared to two million during George W. Bush’s tenure and about 900,000 under the Bill Clinton administration. According to governmental data, the Obama administration has deported more people than any other president’s administration in history. High numbers of border prosecutions continued throughout Obama’s presidency, leaving him with the legacy of locking up more people of color on federal criminal charges than any other president in history. Immigration prosecutions topped 91,000 in 2013 ― 28 times the number of prosecutions in 1993. 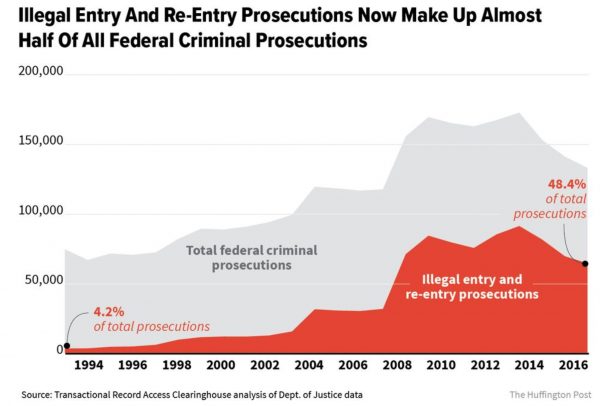 President Trump has built on the aggressive prosecution of immigration violations, which began under Democrat Bill Clinton and greatly expanded under Democrat Barack Obama. Under Trump’s “Zero Tolerance” policy, immigration prosecutions have risen to 57% of all federal criminal cases in 2018. Border prosecutions do not just occur at the border but throughout the country, felony illegal re-entry charges were filed in all but four of the 94 U.S. district courts last year. Trump used the law as a basis for family separations at the border. Under Trump, when parents are prosecuted for the crime of illegal entry, federal officials send adults into the criminal immigration system and their children into the civil system. Previously parents did not face criminal prosecution when they were traveling with their children. Arrests by ICE under the Trump administration in 2017 were about half of what they were during President Barack Obama’s peak years, 2010 and 2011, according to a new report by the Migration Policy Institute.

As a result of this abusive and inhumane policy, there are increasing calls for decriminalization of border migration, treating it only as a civil violation, not a criminal violation. 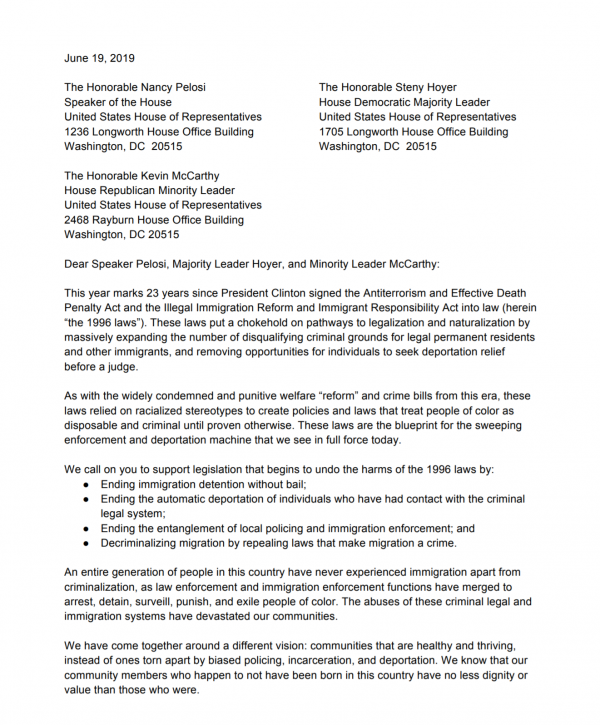 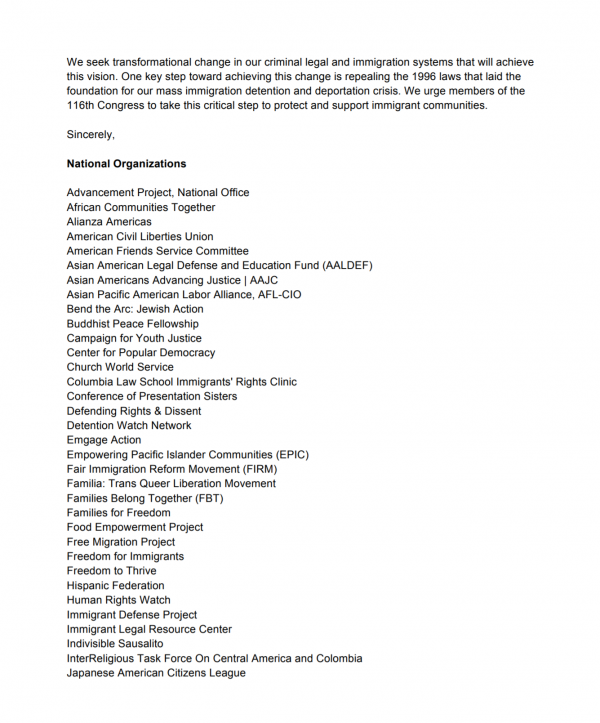