Above Photo: More than 200 protesters came to the Gary Jet Center on Feb. 23, 2018, where a busload of people who had entered the country illegally were expected to be boarded onto a plane for Texas, then deported. (Kyle Telechan / Post-Tribune)

For Richard Aguirre, protesting the deportations of people who have entered the country without permission from the Gary/Chicago International Airport was a natural extension of his work that stopped a proposed Elkhart County detention center last month.

Gary activists had reached out, providing support and assistance for the effort, Aguirre said. He wanted to return the favor.

“We feel connected to them, because they were with us when we started our struggle, so we want to be here as they continue their fight against these flights,” said Aguirre, co-coordinator of the Coalition Against the Elkhart County Immigration Center.

Shouting cries including “love, not hate makes America great,” more than 200 protesters came to the Gary Jet Center on Friday where a busload of people who had entered the country illegally were expected to be boarded onto a plane for Texas, then deported.

Aguirre said he felt using the airport for that purpose was a wasted opportunity for Gary.

“I understand that desperate times call for taking advantage of any economic opportunity,” Aguirre said. “It’s sad to me that this would be at an airport that could be serving such better uses.”

Gary police, SWAT officers and Indiana State Police watched closeby. As in prior protests, activists were bound by barriers including barricades and a fence separating the entrance road to the airport from the parking lot on the other side.

A direct view of white transport buses was obscured for protesters, leaving mostly the site of what appeared to be a chartered plane’s tail.

“I care about doing all we can to dismantle this deportation machine that the government is building,” Aguirre said. “I see this as throwing sand in the gears, making it harder and more expensive for the government.”

Aguirre said his message to federal immigration agents was simple.

“Did you really envision spending your life creating misery for people?” he said. “Is this what you imagined doing with your life? Because, a handful of criminals that you are deporting, you can feel good about. 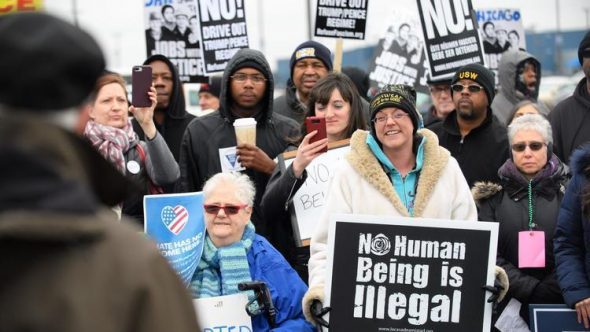 Immigration and Customs Enforcement’s Air Operations started using the airport for detainee removal flights in June 2013, and 12,509 people have been flown out as of June 28, 2017. The immigrant detainees are bused into Gary from a detention center about 40 miles away in Broadview, Ill.

They are then flown to Brownsville, Texas, near the Mexican border, for deportation. Although President Donald Trump has taken a hard line on immigration, more than 2 million people were deported during President Barack Obama’s time in office.

Northwest Indiana Resistance’s Ruth Needleman, co-organizer with L.E. Whitman, said it was upsetting to watch people climb into the plane. The group is a coalition of regional action groups organized after the Trump administration’s travel ban was enacted in January 2017.

Aracely Chavez, 33, originally from Chicago, now of Hammond, said she came to the protests for the second time partly to be a voice for two people she knew protected under the Deferred Action for Childhood Arrivals program.

They were afraid of getting arrested at the airport, she said.

The uncertainly facing the program “is affecting them,” she said. “A lot of them, they were raised here their whole lives since they were kids.

It also drew a sizable presence from organized labor — including United Steel Workers members from as far away as Houston.

Ephrin Jenkins, of Gary, a U.S. Steel worker and founder of Black Labor Week, said it was important to bring union members from around the country in town for his week-long event to see the protests over deportations.

“It’s probably going on in their states as well,” he said.

The Rev. Dena Holland-Neal, of Trinity United Church of Christ, noting the presence of heavily armed SWAT officers, called on Gary Mayor Karen Freeman-Wilson to take a stronger stance and use influence over the airport’s board to move against its use as a staging ground for deportations.

“This is in no way welcoming,” Holland-Neal said.

Gary/Chicago International Airport spokesman David Goldenberg because it receives federal funding like other airports, they are unable to refuse federal flights from operating at the airport.

“We’re in a position, we are prohibited from stopping anyone from using the airport,” he said. “We play no role in any of this.” 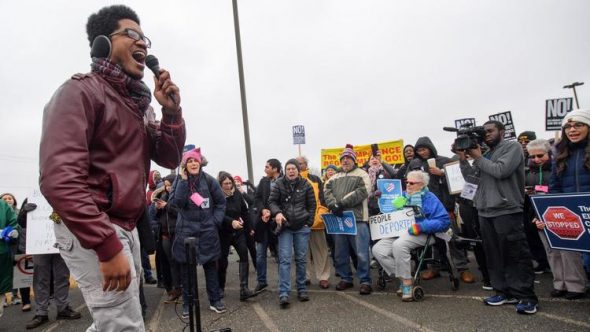